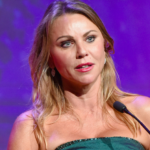 Logan made her statement Monday night on Fox News.

“This is what people say to me: He doesn’t represent science, he represents Dr. Josef Mengele, the Nazi doctor who did experiments on Jews during the Second World War and in the concentration camps,” Logan told Pete Hegseth during “Fox News Primetime.” A banner on the screen read, “FAUCI THINKS HE IS ABOVE CRITICISM.”

She was discussing the response to the Omicron variant of COVID-19 and offered criticism of vaccination mandates.

Fauci isn’t the first to condemn the comments, either. On Monday, the Auschwitz Memorial addressed them, too.

“Exploiting the tragedy of people who became victims of criminal pseudo-medical experiments in Auschwitz in a debate about vaccines, pandemic and people who fight for saving human lives is shameful. It is disrespectful to victims & a sad symptom of moral and intellectual decline,” tweeted the memorial’s official account, which is followed by 1.1 million people.