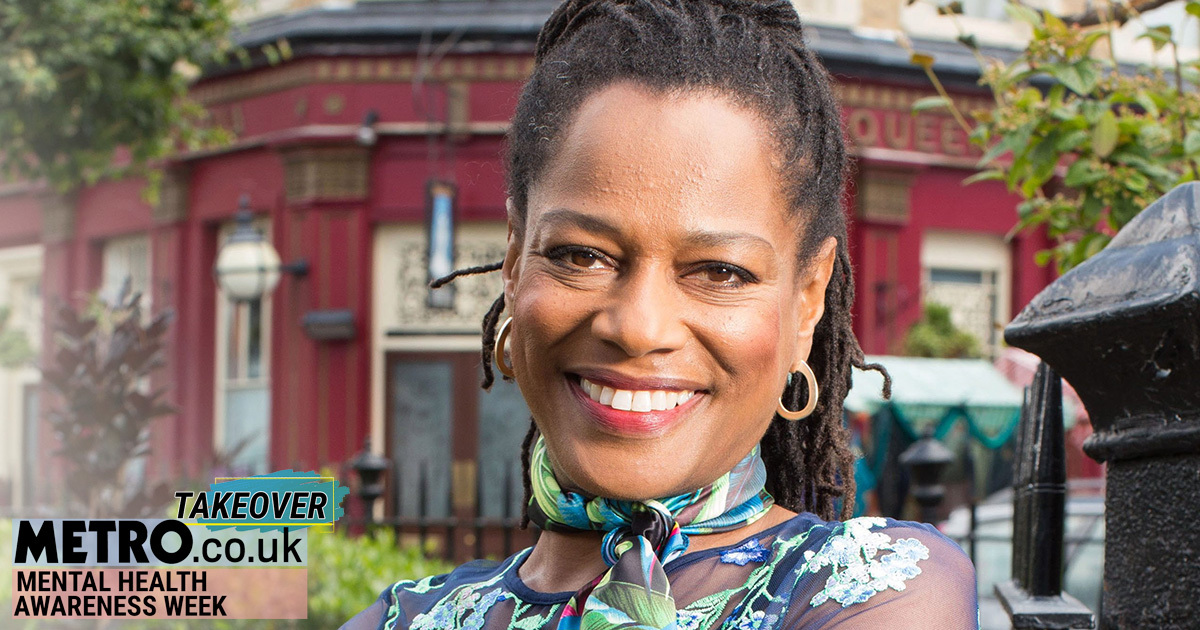 This storyline is close to my heart – I have had family members who have dealt with mental health problems and this is a good, strong storyline. I don’t think there’s such a thing as talking about these things too much.

Did you know the storyline was going this way when you joined?

No, I didn’t know that when I was cast – I knew I would have a son and there would be a secret but that was about his paternity. But of course, layers are always unfolding on a continuing drama, things move along with characters.

What research and support have you had?

Mind have been involved in helping and supporting this storyline – making sure that things are correct and authentic. And they’re keen that we don’t perpetrate stereotypes so they gave us notes on scripts and performance, Stevie has spoken to a Media Volunteer from Mind called Antonio who shared his own experience of schizophrenia.

In the past, before EastEnders, I was a phone support worker for a mental health charity. When you can’t help the people nearest to you, you feel you have to do something somewhere. It is difficult for the person who is unwell but also its difficult for the families – because you don’t know what to do.

So that was my way of helping where I felt I couldn’t with the person I was close to. And that’s what we’re seeing in this storyline, the impact it has on every family member when someone is struggling with their mental health.

Is it important that EastEnders shows a response to outdated stereotypes?

I think the platform we have is vital for showing the true representation and accurately showing people what it’s like to live with and manage a mental health diagnosis.

Sheree’s approach is one that is quite forceful – but do you sympathise with her?

I can see where she’s coming from, it’s difficult. Parents want to protect their children but there’s only so much you can do and at some point you have to let them live their lives. For Sheree, she struggles to let Isaac be independent and begin a romantic relationship with Lola because she worries it’ll hurt him and negatively impact his mental health. Part of Isaac’s story is about him learning to live openly with his mental health problem, including sharing his diagnosis with his friends and family.

It’s difficult for Sheree to let him do that because she’s the only one who has seen him at his worst, and she’s frightened of the stigma that comes with telling people you have schizophrenia.

When Isaac is unwell, she tries to control all aspects of his life to but it’s like having a bucket to empty the sea – you can’t control everything, he has to live his own life. Sheree will continue to try and micromanage everything and that’s what we can expect – that’s her idea of a solution. She wants to fend everyone else off but sometimes you can be too close to the person to see the bigger picture and the best solution.

What does Mental Health Awareness mean to you and would you say there is still a way to go?

Yeah I think there definitely is. In the UK, black British people are more likely to be diagnosed with a psychosis, and they are four times more likely to be sectioned under the Mental Health Act. I think speaking more about these issues will be helpful to a lot of people who have not seen representations of themselves on screen. The more we can speak about these problems, the more people will understand how brave it is to seek help – I think it will make a world of difference.

Soaps have a huge platform to tell these stories – are you proud to be telling this story?

Absolutely – as you say, it does make a difference. Popular culture has such a strong hold on views and opinions because the audience is huge. That’s why the tone has to be right – if you say something off, it can cause a lot of damage. I think the show is handling it really well. They’ve done previous stories like this in the past – I hope this makes a difference to somebody, somewhere.

It’s been quite a year – what ways do you have of looking after your mental wellbeing and self-care?

I’m out in my garden and have an allotment and it’s just fantastic. I have been so grateful to have one and demand for them has really gone up. When I’m am there, planting or potting, it’s just being in the moment -hearing the birds and seeing the foxes. It’s just there and I am so grateful to have that space. Also being able to connect with friends has been really important– even meeting on Zoom and WhatsApp groups. they have been so positive.

With a brilliant team that includes Alex Beresford, Russell Kane, Frankie Bridge, Anton Ferdinand, Sam Thompson, Scarlett Moffatt, Katie Piper and Joe Tracini, each of our guest editors have worked closely with us to share their own stories, and also educate, support and engage with our readers.

If you need help or advice for any mental health matter, here are just some of the organisations that were vital in helping us put together our MHAW Takeover: