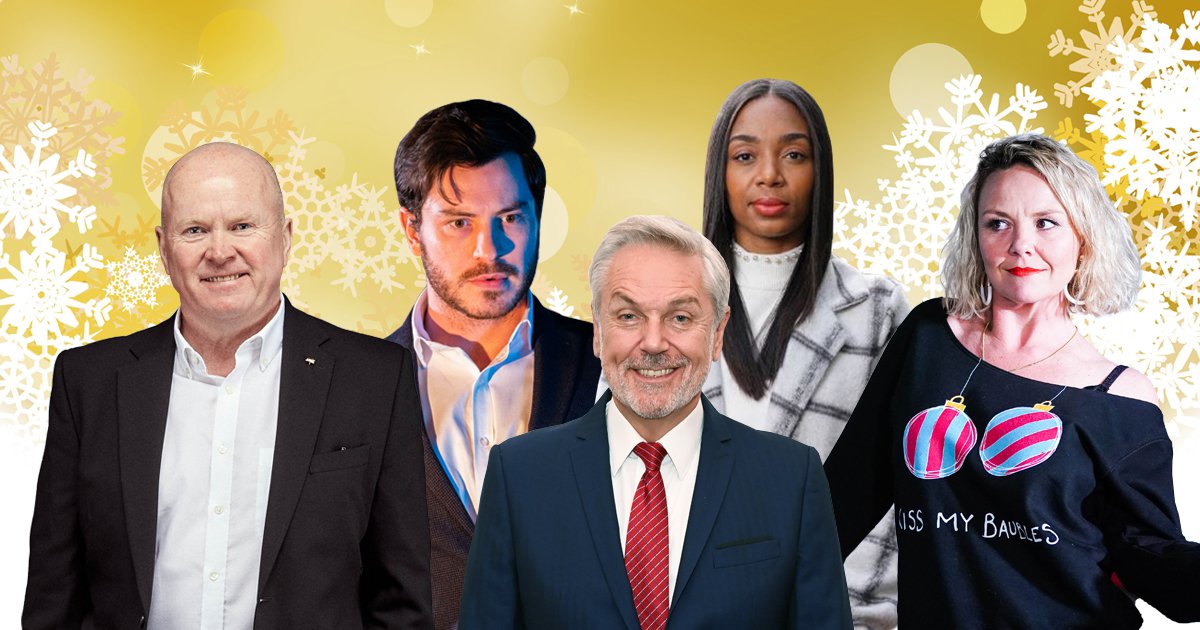 ‘Tis the season to be jolly! Well, that is, of course unless you live in Walford like the mainstays of EastEnders.

The festive period is notoriously filled with death, destruction and drama aplenty, and that’s all before anyone even gets to have their desert!

This year will be no different, with huge developments set to take place across much of the BBC One soap’s biggest storylines.

Gray Atkins’ wedding to Chelsea Fox arrives, but little does he know that Whitney Dean has been looking into him, and on the night before Christmas, she finds what she needs to expose the killer!

Janine Butcher, meanwhile, is scheming (though to be fair, when isn’t she?), as she sets her sights on Mick Carter, but will she get what she wants?

It’s certainly set to be Christmas to remember in Walford, and here’s everything you’ve got to look forward to!

Gray caught out on his wedding day

Gray Atkins has got away with murder for long enough, and this festive season, his secrets are finally discovered – by none other than Whitney Dean.

Whitney knows full well that Gray isn’t the kind-hearted soul he’s been masquerading as, having seen first-hand just how aggressive and controlling he can be.

Desperate to save Chelsea from a life of misery – and much worse – she makes it her mission to stop the Christmas wedding, and in shocking scenes the night before the ceremony, she finds what she’s looking for, as she discovers Gray murdered Chantelle.

Armed with proof, she becomes more determined that ever to stop the wedding and reveal the truth.

And on Chelsea’s big day, Whitney tells the bride-to-be everything, leaving her stunned to silence.

Will the wedding go ahead?

Chelsea and Gray aren’t the only ones set to wed this Christmas, as Jack Branning plans to tie the knot with Denise Fox. With one ceremony seemingly destined to end in horror, will the other go as planned?

Or will it be a double wedding disaster this holiday season?

Janine Butcher knows exactly what she wants under her tree this Christmas, and that’s none other than Queen Vic landlord Mick Carter!

Mick, as viewers will know, is devoted to beloved wife Linda, but Janine is desperate to do whatever it takes, from wearing a sexy Santa outfit, to meddling in Nancy’s love life in order to get her out of the picture.

The question is: will she succeed in her mission? Or will Mick remain firmly loyal to Linda, thus seeing through her schemes?

Tom’ Rocky’ Cotton has been lying to just about everyone in Albert Square, given that he’s not actually named Terry Cant, nor is he Sonia Fowler’s real dad.

The conman, however, has fallen in love with family he’s forged since rocking up in Walford, and is therefore desperate to keep the truth about his betrayal to himself.

But with Christmas around the corner, one can’t help but wonder if his secret will out in an explosive fashion?

Well, given the fact that the letter he wrote to Sonia – which explained the truth about everything – is about to reappear, it’s a likely possibility!

Room for one more on Christmas Day?

Sharon Watts is heartbroken once more in the wake of Jada Lennox having disappeared with baby Alyssa. Phil Mitchell, however, is hellbent on tracking down the teen, and even has a PI on the case.

That’s the least he can do, given its his fault Jada disappeared in the first place, right?

Sharon, meanwhile, plans a Christmas party, and she invites both Kat and Phil. Kat declines, but Phil makes a surprise appearance, and soon enough he’s got some information from his PI!

Sharon and Phil discuss the new discovery just as Kat walks in, and – fed up – Kat lashes out, telling them to leave the girl alone.

Phil, fuming, has a go at Kat for the way she spoke to Sharon, and in an effort to make things right, he invites Sharon for Christmas with the Slaters!

Kim Fox has been struggling to forgive Denise for the role she played in ensuring she didn’t find out about Vincent Hubbard’s death, and in spite of her efforts to move on, she’s been unable to do so.

The two sisters have a heart-to-heart in upcoming scenes, with Denise telling Kim just how much it would mean if she came to her wedding. Kim considers it, but she ultimately reveals that she and the kids and are going back to Scotland.

Will she really leave the Square – and her sister – behind?

Rainie Highway distracts herself from her troubles with Stuart when she’s sent a drink from a handsome man, but will she give into temptation and cheat on her beloved husband?

What’s more, will Stuart be able to open up about his breast cancer diagnosis to his wife? Both Rainie and Callum attempt to talk to him in upcoming scenes, but their efforts prove fruitless.

Phil and Denise at war over Raymond

Phil wants to spend some time with Raymond, but Denise has other ideas. She ultimately reconsiders, allowing the hard-man time alone with son, but things soon take a turn, and Kat ends up keeping a pretty big secret as a result.

Sharon picks up on her secrecy, and thus she quizzes her, forcing her to admit the truth. Phil overhears her confession and confronts Denise, who has a warning for him. Will Phil retaliate?