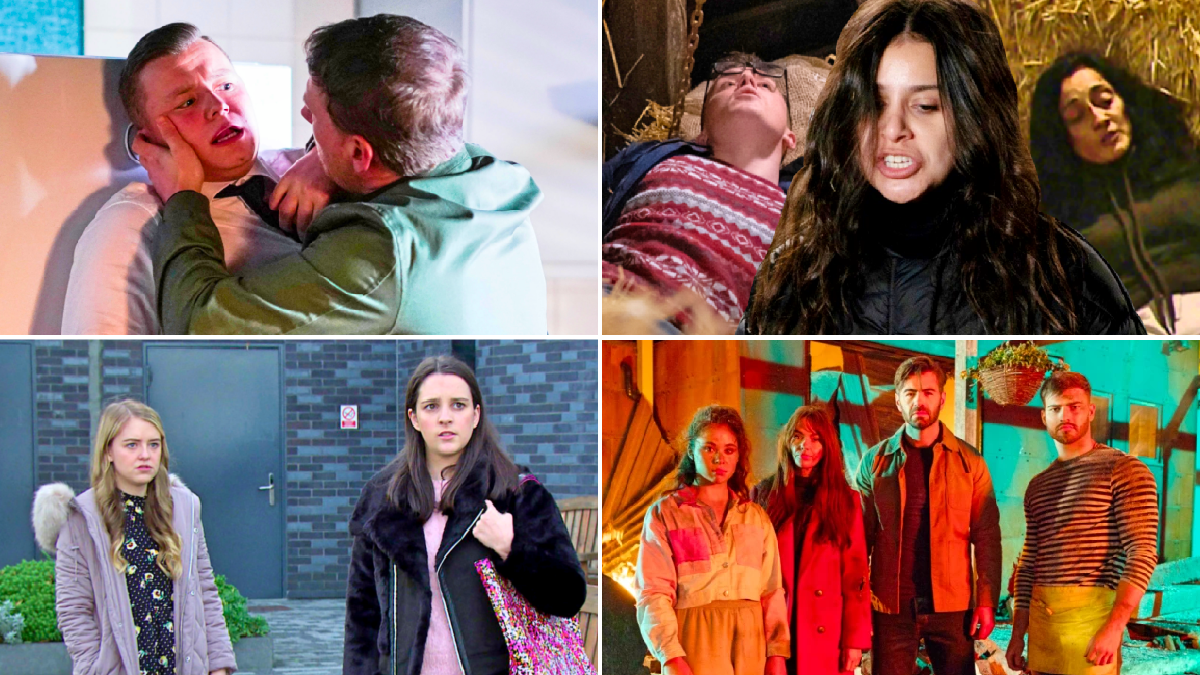 The soaps kicked off the new year with a bang, but next week, they take things to the next level, with one even featuring a huge explosion.

We are, of course, referring to Hollyoaks’ unmissable hour-long outing on Tuesday, which will see the Channel 4 soap feature its first stunt since the pandemic.

Lives are on the line, chaos ensues and the spectacle is nothing short of superb.

It’s not just literal explosions that are on offer next week, however, as there are many explosive scenes across all our favourite serial dramas, including Yasmeen Metcalfe’s discovery that Zeedan Nazir has been lying to her in Coronation Street.

EastEnders, meanwhile, sees the return of the icon that is Pam Coker, as she makes a comeback in the wake of the homophobic attack that left Ben Mitchell and Callum Highway in a bad way.

And as for Emmerdale? Well, HOW LONG HAVE YOU GOT? All the goss you’re no doubt craving is below, so we’ll just say that the ITV soap is not to be missed next week, as Meena Jutla’s murderous rampage reaches another dramatic peak.

1. Summer and Amy are horrified to find Max looking at an upskirting photo, and Summer later discovers that the picture in question is of her. Asha insists that she report the incident to the police. Summer, however, feels too embarrassed. Amy, meanwhile, tears a strip of Max for violating Summer’s privacy and looking at the picture, and vows to find out who it is that’s taking and circulating the photos.

2. Joseph is being bullied at school. Gemma and Chesney later find out about his ordeal, and they’re devastated. Despite the little boy’s pleas, Chesney heads to the school. When Joseph finds out what he’s done, he’s fuming, and soon enough, he’s nowhere to be found! Chesney wastes little time in starting a search, but his efforts prove fruitless. Afterwards, he returns home, filling Gemma in on the fact that Joseph is missing.

3. Craig goes out for a run and sprains his ankle. Tyrone however, has the perfect solution – or so he thinks! – as he lends Craig a crutch belonging to Ted! Faye later assists Craig in getting into the flat, but she’s horrified when she discovers that he’s using Ted’s crutch. Craig, meanwhile, becomes inquisitive, as he studies the initials etched into the crutch, leaving Emma and Faye concerned.

4. Tim spends the night at the cab office, and when he returns home, he reassures Sally he hasn’t gone ‘off’ her. Aggie, meanwhile, offers him some advice, insisting that he return to see the cardiologist, explaining that he’ll tell him what the operation will entail. He ultimately does just that, but upon learning that he’ll receive a letter with a date, he is left incredibly scared.

5. Sally is shocked when she discovers that Sophie has broken her wrist in an accident in Crete. She relays the upsetting news to Tim, who was just about to tell her about his own struggles.

6. Yasmeen invites Stu to stay, clearing out the spare room. When doing so, however, she makes a big discovery. Subsequent scenes see Alya convince Zeedan to come clean to Yasmeen, and ultimately he does so, telling his gran all about how Hashim forced him to launder the dirty cash through the restaurant. Yasmeen is stunned to silence by his betrayal.

7. Amy encounters Jacob outside of the hospital, and he’s sporting a sling. He approaches, and claims that he’s turned over a new leaf, having got out of the drugs game. But Amy’s not interested, as she tells him to stay away.

8. Neil is on the warpath, as he confronts Aaron and threatens Dana’s life, leaving Harvey concerned. Aaron plans to convince the far-right group Neil has lost his mind, and he returns having succeeded. But the catch is is that he now has to take Neil’s place and run the operation from Manchester. Harvey, appalled, begs his son to reconsider.

9. Bobby opens up to Callum about his concerns over the far-right, and afterwards, he accidentally spills a drink on Aaron, but in the process, he makes an unnerving discovery. He reveals his fears to Dana, who subsequently confronts her brother. Aaron, however, turns the tables, suggesting that Bobby is manipulating her, and therefore she should come to Manchester with him!

10. Ben is struggling in the wake of the attack, and Callum cannot get him to open up. Pam, however, succeeds in doing so, as she drops by, having heard what happened. Ben breaks down in her arms. Callum, meanwhile, speaks to Kathy and Phil, and together they stage an intervention. Ben admits that he is tired of fighting, revealing that he’s scared for his safety.

11. Chelsea vents to Whitney about Gray, but Whitney encourages her to stay in the game, assuring her that they will catch the killer as soon as he slips up. Chelsea listens, and thus plans a dinner for her husband, determined to play happy families. For now.

12. Suki is less than pleased to discover that Vinny has allowed Dotty to stay rent-free at the bedsit, and insists she pay up or get out. Dotty ends up sleeping rough in the allotments, but later suggests she and Vinny could give things a go romantically if he helps her find a place to stay.

13. Mitch and Rocky suggest that Mick get back out into the world of dating, but it’s clear that he’s preoccupied with other things. Rainie, however, overhears, and realising that Mick and Linda have broken up, she confronts the landlord. But things take a shocking turn as Mick collapses – he’s having a panic attack.

14. Kat is chuffed with her birthday present from Phil, but she soon has other things on her mind when Lola rocks up, fuming over how Phil spoke to Isaac.

15. Vinny, having been taken captive by Meena, is horrified as Manpreet fills him on her sister’s lengthy list of victims. He gives Manpreet his house keys, but the GP loses consciousness as Meena drugs her once more. The following day, however, Manpreet breaks free, and wounds Meena with a piece of wood! But Meena gets the upper hand once more, restraining Manpreet again.

16. Liam is perplexed to find no trace of Meena’s pregnancy or miscarriage in her medical notes, and when he sees blood seeping through a dressing on her wrist, he confronts her. Meena retaliates by threatening to accuse him of sexual harassment, before informing Vinny and Manpreet that Liam’s interference means she’s had to escalate their plans, and thus they’re going to die today. The captives are terrified, as Meena drives the Dingle van into the barn.

17. Tracy reveals that she’s been offered a a job in Nottingham, and Charity encourages her to take it. Nate, however, is heartbroken to find out that she’s planning on leaving the village with Frankie, and he ends up undermining her about her ability to cope in a new city.

18. Priya returns to work, but she’s struggling with discomfort from her burns. An unhappy client threatens to make things worse, but she handles it expertly. However, her urge to scratch her burns gets the better of her, and she’s later upset when she overhears the client making light of her scratching.

19. Jai and Kim are horrified to find out about the hefty fine they’ve received following the survival event disasters. Jai, desperate, makes an application to a loan company, but it’s not accepted.

20. Leyla is over the moon when Billy asks if she’ll plan his wedding to Dawn.

22. Mercedes saves Cher’s life amid the chaos, but things take quite a turn when the McQueens come to discover that one of their own is still in the building. A heroic act is subsequently made, but a shocking lie has a deadly cost.

23. Toby is readying himself to make an earth-shattering revelation. Before he can do so, however, something catastrophic stops him in his tracks. Subsequent scenes will see him make a huge announcement following an explosion, as his close bond with Celeste shines through. And powerful scenes will see the duo at last get their comeuppance for Lisa’s murder.

24. Ethan catches up with Maya and their relationship reaches a thunderous end – with a bang!

25. Peri realises just what it is that she wants while in a life-threatening situation, but will it be too late to make her dream a reality? Will Juliet die in the explosion? The teen rushed to hospital for emergency surgery, leaving Marnie utterly distraught. Afterwards, she has some kind words for Donna-Marie, before tragedy strikes for the Nightingale clan.