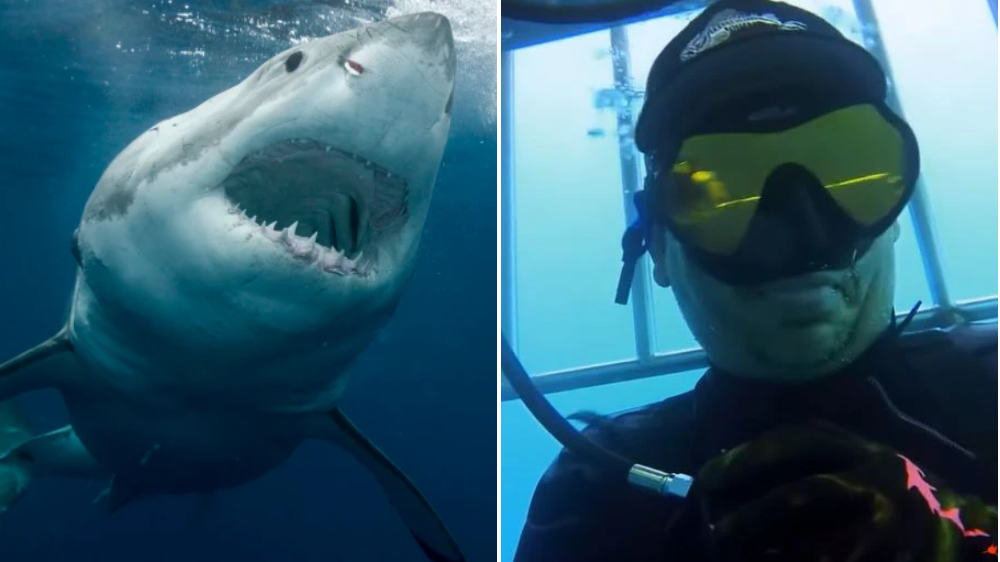 Shark Week has finally returned and is already spoiling fans with a huge list of absolutely wild shows – but it doesn’t get much more WTF than watching a great white leave a ‘poo tornado’ in its path… with a diver in said path.

That’s exactly what happened during the Mega Predators of Oz when biologists studied the diet of great whites and tried to take a poo sample.

In Australia, sharks have been recorded with all types of prey, with no obvious explanation to their change in diet.

In turn, Dr Charlie Huvaneers and his team explore shark infested waters to find out what the great whites have been munching on and why.

You do you, guys.

Great whites have a particularly huge liver and can subsequently pass needless by-product within hours – and plenty of it.

Just ask this guy who quite literally got a mouthful when the Mega Predators of Oz team tried to get a butt swab from an enormous great white.

That is quite literally our new worst nightmare realised.

Even the Jackass boys managed to get through Shark Week without being drenched in shark faeces, but there were tears.

Jackass star Poopie was overwhelmed when he faced getting back into the water for the first time since being bitten by a shark last year.

Shark Week is even bigger than ever before with the actual Dwayne Johnson – aka The Rock – taking over the Discovery Channel as Master of Ceremonies.

And he’s even had a great white named after him.

The Atlantic White Shark Conservancy shared the news with the WWE and Hollywood legend, informing him on Twitter alongside a series of images of Shark The Rock: ‘@TheRock there is a white shark named after you!

‘I’d be honored to meet #TheRock🦈 one day. Thanks for the tweet 🙏🏾’