CMA Awards Top Broadcast, but Dip to Another Record Low in Viewers

Disney+ at 2: Why Marvel and ‘Star Wars’ May Not Be Enough to Challenge Netflix

”The path for deeper household penetration has to be through the development of off-brand, general entertainment content,“ one analyst says

As it celebrates its second birthday on Friday, Disney+ has been an overall success, amassing nearly 120 million subscribers and solidifying itself as a key player in the streaming era. But what’s becoming increasingly clear is that the entertainment giant’s celebrated brands like Marvel, Pixar and “Star Wars” might not be enough to ever usurp Netflix for streaming dominance. Even The Avengers need reinforcements.

Disney+ reached 95 million subscribers in its first 12 months, a number the company didn’t initially think it would hit until 2024 at the earliest. After a rollicking first year, which saw Disney+ blow past even its loftiest expectations, the streamer’s subscriber growth has come back down to Earth.

“We believe that Disney+ has generated nearly best-in-class awareness scores here in the United States, but has failed to penetrate older demographics,” MoffetNathanson analyst Michael Nathanson wrote on Thursday. “Those homes might not necessarily have young kids attracted to Disney’s content or be super fans of Marvel, Pixar or ‘Star Wars’ content. As such, the path for deeper household penetration has to be through the development of off-brand, general entertainment content that has the feel of Netflix, or say… Hulu.”

It doesn’t help that the impressive start for Disney+ caused the company to dramatically raise its subscriber goals to 230-260 million. On Wednesday, Disney said it added only an additional 2.1 million subscribers in its most recent quarter, far below the 10 million that Wall Street had been expecting. Not only was it the second time in 2021 that Disney+ failed to meet analyst expectations, it was Disney+’s smallest subscriber gain in its short lifespan.

And it came despite the August launch of an animated Marvel show, “What If….” and the day-and-date availability of “Black Widow,” the first MCU film in nearly two years, in July. The only other quarter when Disney missed its subscriber targets was the same that featured the MCU’s Disney+ debuts with both “WandaVision” and “The Falcon and the Winter Soldier.”

That underperformance on Q3 subscribers was enough to send investors panicking: Disney stock fell 7% on Thursday.

Even so, Nathanson still believes that Disney can reach its lofty subscriber goals by 2024, but the streaming trajectory after that will depend on two things: How much it expands beyond its main core brands, which include Nat Geo, and what kind of growth it can achieve overseas. (MoffetNathanson estimates that more than half of Disney+’s new subscribers over the past year have come via its integration within India-based streamer Hotstar.)

“Excluding Disney+ Hotstar, Disney+ only added around 20 million subscribers over the year, with almost 70% of those coming in the first fiscal quarter of the year,” he wrote. “By our math, we still believe that Disney+ will be able to reach Disney’s FY 2024 subscriber target. (We estimate 245 million).” 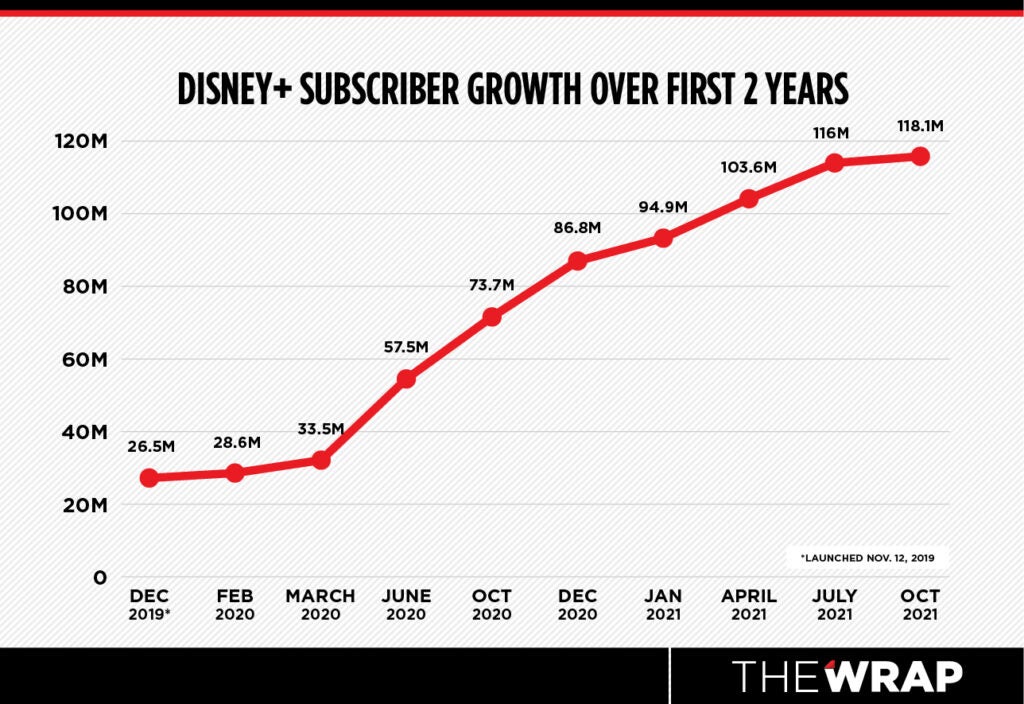 During Wednesday’s earnings call, Disney executives attributed the slowing growth (which CEO Bob Chapek hinted at a few months ago) to a slowdown in production as the pandemic still rages on and lengthens the timeline for new shows to be completed. CFO Christine McCarthy even warned that the streamer wouldn’t achieve the desired cadence of rolling out new shows until a year from now.

“Looking at fiscal ’22, we are thrilled about the quality of the content coming in the first three quarters of the year, but we will not yet be at our anticipated steady-state cadence of content releases,” McCarthy said. But the fourth quarter “will be the first time in Disney+ history that we plan to release original content throughout the quarter from Disney, Marvel, Star Wars, Pixar, and Nat Geo, all in one quarter.”

CFRA analyst Tuna Amobi argued that Disney+’s sub growth will climb as the content pipeline speeds back up, with at least four new Marvel and Star Wars series apiece over the next 12 months, beginning with Marvel’s “Hawkeye” later this month and the “Star Wars” spinoff “The Book of Boba Fett” in December. “I think you’re gonna see a re-acceleration,” he told TheWrap. “Netflix has taught us that any given quarter can be very volatile, especially coming off the pandemic.”

But not every analyst is as bullish.

“The pace of Disney+ net adds remains well below the run-rate required to achieve the mid-point of fiscal year 2024 guidance,” Bernstein analyst Todd Juenger wrote in his own report on Thursday. “The re-acceleration, other than additional market openings, will supposedly come when the full cadence of new original content starts hitting the service in the fourth quarter of fiscal 2022. But we believe the underlying premise (i.e. more content = more subs) remains in doubt.”

There have been a few other warnings signs for Disney+. The growth of Hotstar in India is one reason why Disney+ only generates a little more than $4 per subscriber a month, despite the service costing double that.

During a press event on Thursday, Kareem Daniels, chairman of Disney Media and Entertainment Distribution, said global production will become a bigger priority as every streamer seeks to replicate Netflix’s success with South Korea’s “Squid Game.” “Over the next few years, will be significantly increasing titles from regions around the world with more than 340 Local originals planned to premiere globally,” Daniels said. Disney+ launched in South Korea and Taiwan today, and will debut in Hong Kong on Monday.

“They’re really customizing their offerings based on the needs of each market and the missing piece right now, where they may be playing a little bit of catch up to Netflix, is on the local productions and regional productions. And that’s going to be critical for them as they kind of launch in more markets,” Amobi said. “Their local and regional content is going to be very important for them to make their mark there.”