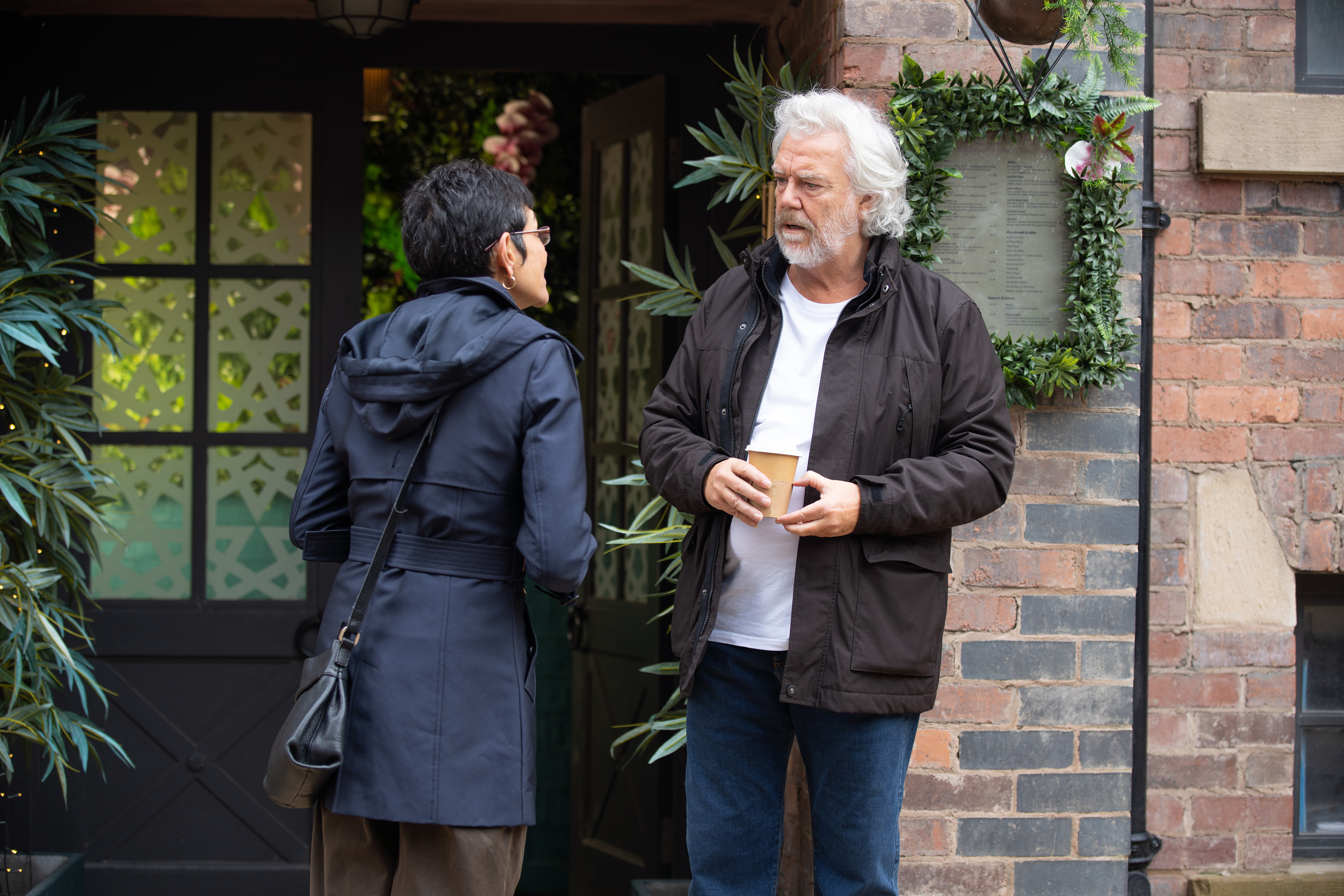 Of course, one of the best things about this new character is the journey he’s been on so far.

He first popped up in a small scene back in October, carrying the backpack Corey had dumped in the canal on the night of Seb and Nina’s attack.

Homeless and looking for some food, Stu happily collected some meals from Speed Daal and headed off, unaware the bag he had found was the key to putting Corey behind bars.

After learning what had happened to Nina and Seb, Stu decided to give the police the bloodied clothes he also found in the bag.

So yes, without Stu, Corey could’ve got away with Seb’s murder.

Fast forward a few months and Stu’s life has changed dramatically. Now working as a chef at Speed Daal, Stu enjoyed a shopping trip a few weeks ago and bought himself some fresh new clothes and a jaunty cap – something he hasn’t been able to do for years.

Another complete joy when it comes to Stu is that when he first arrived, he was a complete blank canvas. With no connection to anyone on the cobbles, the character has been built up slowly since his arrival and recently, we learnt he has a daughter.

However, because of Stu’s dark past, he isn’t in contact with Bridget but has been sending presents and cards to an address he thinks she still lives at.

Unfortunately, in tonight’s episode, Stu receives some bad news as his latest gift is returned to him by the new owners of his daughter’s house.

With no way of contacting her, Stu is at a loss, as Bill Fellows recently told Metro.co.uk:

‘That’s a real blow to him actually. It’s quite complicated because he’s been sending presents to her for the last however many years, but never got a thank you or anything. He just has a hope and belief that she must have got it. So, when it’s finally sent back he knows she hasn’t got the present and she’s moved on and he hasn’t got an address for her. I think that really crushes him. It makes him turn to the drink for a little bit and it really hurts. Which is strange because you think, you haven’t got a reply from your daughter for 15 years. But he had that hope, and the hope has been completely dashed by an innocent family just returning a present. So something as simple as that has got to him badly.’

‘I think he’s very tempted to give up, but with help from Yasmeen, we talk about our family values, and he doesn’t quite give up. It’s a very big thing for him, his daughter. Even though he’s left it for a long time, it’s there. In the story it becomes quite a big thing.’

Yasmeen (Shelley King) has been someone determined to help Stu ever since they met.

This is a beloved character also with a traumatic past due to the abuse she received at the hands of Geoff Metcalfe.

Yasmeen certainly sees Stu as a kind man who’s done a few wrong things in his life but as Bill explains, his character’s past could put his friendship with Yasmeen at serious risk.

‘From her point of view you can understand she’s incredibly vulnerable from what happened in the past. We tend to have these traumas in our lives and in real life they’re not forgotten about, and it takes years and years and years to get over it. So, she’s much more fragile and vulnerable and we’re all skirting round that. Stu wants to be with her, he wants to have a romance with her, but we’ll see how it turns out.

‘For Yasmeen, it brings out all her fears when she finds out the little white lies he’s told. They’re not major and to most people they wouldn’t be bad, but to Yasmeen it’s bigger. It’s a very delicate relationship they’re having. They’re both good and decent people.’

Throughout our chat with the Corrie star, we got the feeling he’s very much looking forward to the audience learning more about Stu as when Bill first arrived, he didn’t know much about him either!

‘The writers have entrusted me with a mission to carry it forward, which is what we’re doing, we’re feeding off each other. What I’ve loved about it is it’s been quite a slow burner as well; it hasn’t all come out at once. The audience have known for a while that he’s got some sort of criminal record, but no one knows what that is.

‘When it finally does come out it’s a strong story.’