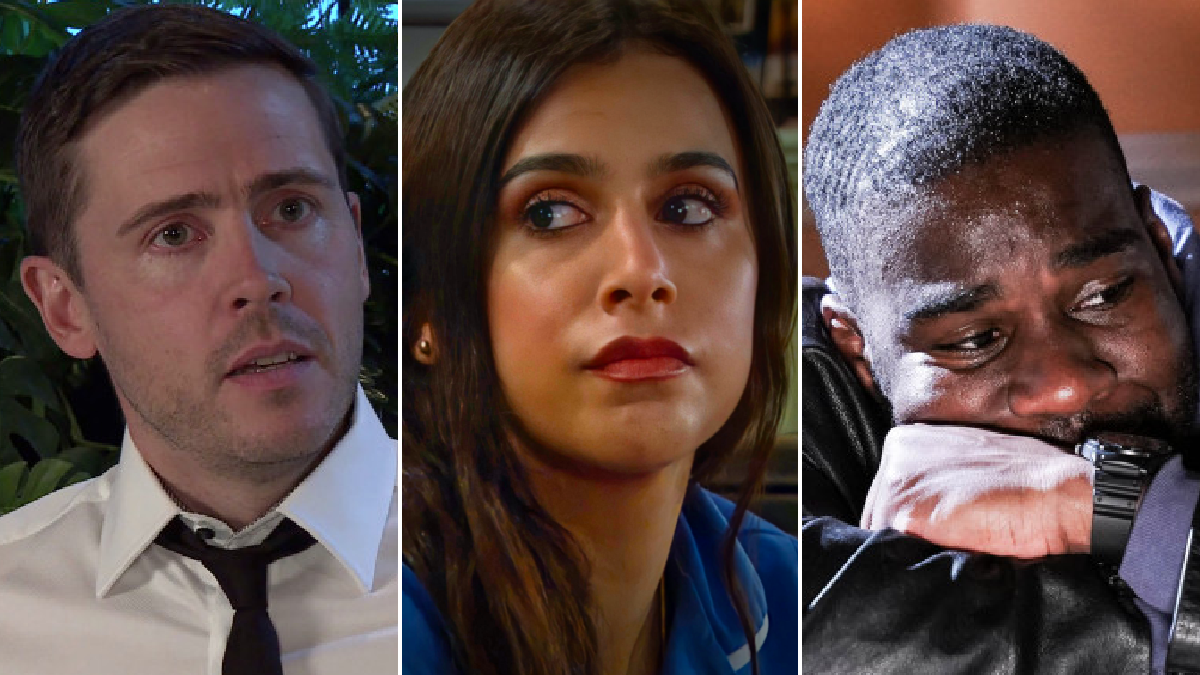 With Euro 2020 officially at end, things return to some degree of normality in the land of soap scheduling.

Coronation Street and Emmerdale will no longer be available to stream ahead of broadcast on ITV Hub, meaning that you’ll have to wait and catch this week’s episodes as they air on the telly!

But, having seen them all, we can assure you that they are absolutely worth the wait.

EastEnders, meanwhile, will be made available on iPlayer until the end of Tokyo 2020 Olympics, meaning you can catch all of this week’s episodes right now!

Hollyoaks, meanwhile, will air as normal on Channel 4 and E4, respectively.

With new developments for killer Meena Jutla in the wake of her claiming Leanna’s life, to Todd Grimshaw sinking to yet another new low, here’s all the must-see moments soapland have to offer this week.

Billy tells Todd, Summer and Will that he’s been given the go-ahead to spend £7,000 on a heat pump for the halfway house, which leads to Will instructing Todd to steal the cash from Billy! Todd thinks on it, and later tells Will he’ll need his help if they’re going to steal the heat pump. Will, however, gets his hands on Todd’s engagement ring, telling him he can have it back when he’s got the money. Todd steals the heat pump, which Ed then reports as stolen. Craig, having got word from Ed that he and Paul had fallen out, arrests Paul for the crime, as Billy and Todd watch on!

Huge danger for Isaac, Lily and Arthur in EastEnders

Isaac’s auditory hallucinations prevent him from taking his medication, and when he crosses paths with Lily and Arthur, he tells him to go on a picnic and stay away from the house. He wants them out of harms way, as he attempts to break into Ruby’s! Ruby, however, catches him in the act, and she’s panicked when she can’t find the kids. Isaac, meanwhile, becomes more and more distressed, and runs into the house as Martin calls the police. Patrick attempts to gain entry, and he asks Isaac where the kids are, promising his son he won’t let anything bad happen to him.

Jimmy kisses Mandy as he faces court in Emmerdale

Mandy reads aloud the speech that she’s prepared for the judge, and it’s clear that Jimmy is overcome with emotion. Both guilt and gratitude. Caught up in the moment, he leans in for a kiss. Mandy momentarily returns the kiss, before they both spring apart. Jimmy, like the last time, is mortified, and apologises.

Nicola attempts to remain positive, assuring Jimmy that his flustered testimony on the stand was just that of an honest man. Jimmy, however, is riddled with guilt over his kiss with Mandy, and he rejects her positivity, as he’s utterly convinced that he’s going to prison. So much so, in fact, that he heads off to pack. But are his suspicions correct? Will Jimmy be going to prison?

Martine struggles to hide the side effects of her chemotherapy, as she stumbles through the village, and on-lookers assuming that she’s drunk. Felix is heartbroken to discover that she has cancer, while Martine tries to focus on something else, as she goes shopping for an outfit for a night out. Her hair, however, falls out mid-try. She subsequently breaks down, just as Felix shows up with her a bunch of her favourite flowers. Martine opens up and, in touching scenes, he assists her in shaving her head.

Fiz decides to get back in the dating game after encouragement from Sean and Beth, and she is matched with a guy called Chris. Chris, however, turns out to be a reporter hoping to run a story on aggrieved women who’ve been dumped for a younger model. Maria urges Fiz to take Chris up on her offer and do the article, as she’ll find it therapeutic. Tyrone and Alina are appalled when they see the article, and Ty confronts Fiz, evidently hurt. However, he plans on retaliating, as he approaches Daniel with a pitch of his own.

Kheerat is incredibly concerned for Suki, who is still struggling in the wake of Jags’ death. She’s having none of his worry, however, and heads to the Minute Mart. And she’s far from pleased when she finds Honey there running things.

Meena isn’t pleased she’s receiving little to no attention from David, and therefore she schemes in order to win favours.  David reminds her Jacob is not going to get over something like the death of a loved one so quickly, and thus he’s decided to go away. Meena misconstrues, believing that he means he’s taking her away. David clarifies, and desperate to regain control, Meena offers a word of advice, claiming that this is the worst thing he could do, as Jacob needs to be surrounded by his friends. David agrees, and Meena is hailed as a hero once more.

With Donna Marie having overheard James asking John Paul to keep their passion a secret, she makes her move in upcoming scenes. The young woman pops by James’ flat, and tells him that she knows all about the kiss, and threatens to reveal it, unless he can get Juliet’s non-molestation order removed!

Alya breaks up with Ryan in Coronation Street

Ryan is shocked when he wakes up in Daisy’s bed, but has he cheated on Alya? That remains to be seen, but he begs Daisy to keep shtum about what happened. Troublemaker Daisy, however, soon spills the beans in front of Alya, leaving her in shock. Alya declares that she and Ryan are over. Jenny offers Ryan a room at the Rovers, and accuses Daisy of deliberately causing trouble.

Chelsea receives a warning about Gray in EastEnders

Following her hearing, Chelsea has to wear an ankle tag, but is still eager to go to Gray’s work do. She wants to make the most of the free drinks, but ends up embarrassing herself in front of Gray’s boss Laura, who advises her to run while she can!