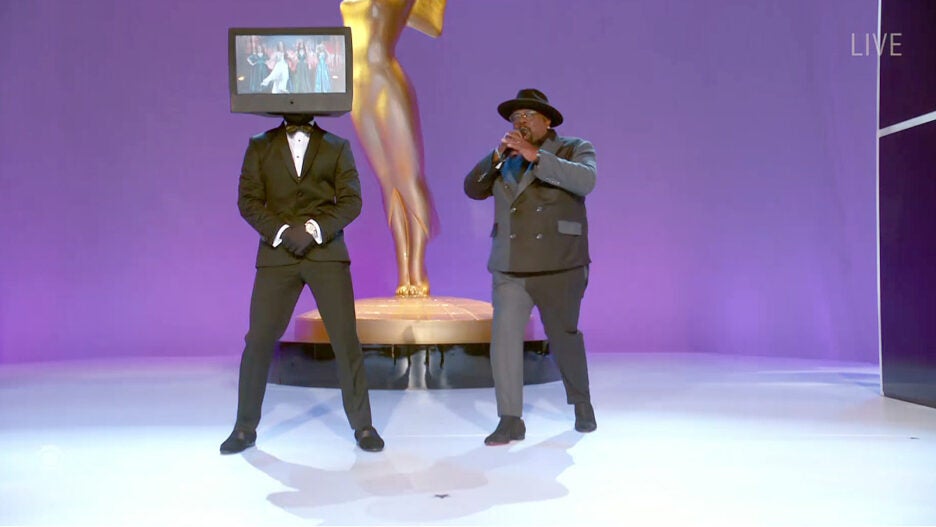 Cedric The Entertainer opened the 2021 Emmys with a TV industry-themed tribute to Biz Markie, recruiting multiple nominees and other stars to join him in singing a television-centric cover of the late rapper’s “Just a Friend.”

The 73rd annual Primetime Emmy Awards host sang, “Oh TV, you, you got what I need,” in honor of his “best friend,” television, with the help of Lil Dicky, LL Cool J, Rita Wilson, Mandy Moore, Brendan Hunt and more Emmys guests in the theater.

Biz Markie, the legendary rap pioneer known as “the clown prince of hip hop” and for his 1989 hit single “Just a Friend,” died July 16 at the age of 57.

His cause of death has not been made public, but the rapper, also known for cult hits like “The Vapors” and for numerous collaborations with other musicians, had been battling diabetes in recent years and had been hospitalized with complications from the illness in April 2020.

Born Marcel Theo Hall in 1964 in Manhattan, Biz Markie began rapping in the early 1980s and made his mark first as a member of the influential Juice Crew rap collective, which also included fellow legends Roxanne Shante, Big Daddy Kane, Kool G Rap, and Mr. Magic. He released his debut album, “Goin’ Off,” in 1988. The record featured the classic underground rap hits “Nobody Beats The Biz”, “Vapors”, and “Pickin’ Boogers” and established Markie’s comedic chops that led to his popular nickname.

Biz Markie reached his greatest period of fame with his second album, 1989’s “The Biz Never Sleeps,” which produced the late 80s classic “Just a Friend.” That single peaked at #9 on the Billboard Hot 100 and the album was certified gold in 1990. Released during a particularly innovative time in hip hop, the record is remembered as one of the most influential and enduring rap releases of its era.

Tags: 2', Cedric, Entertainer, opens, the
You may also like
Celebrities News