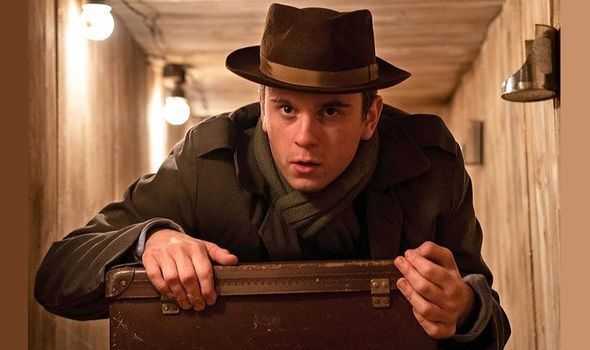 South African-born Roger Bushell, a Cambridge graduate known as the Big X in Stalag Luft III, was desperate to return to England to marry the socialite love of his life. The Squadron Leader headed up the “escape committee” in the prison camp and helped organise the escape of 76 prisoners in March 1944, the biggest of its kind from any prison during the war. Simon Pearson, author of The Great Escaper, said: “There were personal reasons [why Bushell wanted to escape].

He was in love with Lady Georgiana Mary Curzon, whom he had nearly married in the mid-1930s.

“She had rekindled that relationship through letters she sent to Stalag Luft III and I don’t think there is any doubt that although Bushell was a military leader, he was also driven by great passions.” He added: “The Great Escape was a love story as well as a war story.” But Bushell never made it home. He was one of the POWs captured and executed by the Nazis.

The three-part Channel 5 documentary, The Great Escape, also reveals that disloyal Germans in the Luftwaffe-run camp, near Sagan, helped Bushell with his secret plans. Joked Guy Walters, author of The Real Great Escape: “This was the greatest example of Anglo-German co-operation since Victoria and Albert!” Mr Pearson added: “I think a lot of the camp staff realised that victory was not necessarily inevitable and so they started helping the escapers in different ways.”

Tools, identity documents, compasses and cameras were all sourced from the guards, often for no reward. Intelligence was also given to campmates from those Germans who did not support the Nazis. It was given to MI9, a spy service set up for passing secrets to prisoners of war. Mr Pearson said: “One German guard, Hess, supplied intelligence on the German secret weapons programme, the V1 & V2. His brother was a scientist on the programme.”

Bushell “took escape planning to a whole new level”, according to the series, when he arrived at the camp after being shot down on D-Day. Mr Pearson said: “It was put on an industrial footing and his plans were breathtaking in ambition and scope.”

MrWalters explained the reasoning behind Bushell’s plan of three tunnels: “He announced three would be simultaneously dug, getting hundreds of people out in one night in the greatest escape in history. That was the whole idea of the Tom, Dick, Harry tunnels. They might find one, even two, but never three.” Each tunnel was nine metres deep so the digging would not be picked up by German microphones, and 100 metres long to reach the cover of the forest. “It was a serious engineering project,” said Mr Pearson.

Hollywood put its own spin on the story, with 1963’s The Great Escape, starring Steve McQueen, now a regular Christmas film. Mr Walters said Americans did make their contribution: “People criticise the film, saying there were no Americans [in the escape], but they did arrive in great numbers [in the camp] and were involved in the preparation.

“It’s not such a travesty as people say. It feels like a British story but only 50 percent of the escapers were British themselves. The rest were made up of prisoners from countries occupied by Germany.” But Bushell’s dream of returning to the love of his life would be ill-fated. The 33-year-old was captured by the Germans and murdered by the Gestapo, in a tragic scene immortalised in the 1963 film.

Forty-nine others would also be executed. Mr Pearson said: “Bushell had set out to make mayhem for the Hun and he had achieved this beyond his wildest dreams. “It was a propaganda disaster for the Germans. People realised they couldn’t even control the prisoners in their backyards.”

Back in Britain, Bushell’s great love Lady Georgiana had been forced by her father into an unhappy marriage in 1934. Mr Pearson said: “Bushell believed it was his destiny to get home. But it wasn’t to be.”

The Great Escape, Channel 5, on Tuesday, Wednesday, Thursday at 9pm