American Horror Story wrapped up ten seasons running tonight with Sarah Paulson’s Mamie Eisenhower getting her head blown up. Like, a full on bloody splat. I can’t remember an AHS where I laughed so hard.

In a unique season that began with a family’s transformation into vampires in Provincetown, Massachusetts (Red Tide) which then handed off to a completely different second story, Death Valley, which was a celebration of 1950s B sci-fi films, as well as Alien, They Live, V and I swear, a wink at Denis Sanders’ Invasion of the Bee Girls, AHS Season 10 continued to reinvent itself, showing no signs of grey, rather knee-slapping hysteria laced with groovy retro style. Similar to the duo’s Scream Queens, satire and horror proved once again as bloody sisters.

After President Dwight “Ike” Eisenhower (Neal McDonough) made a pact with aliens, enabling them to thrive quietly stateside at Area 51 in exchange for technology, how can we expect such a deal with the devil to end?

Why with the aliens winning, duh.

Under the oversee of femme extra-terrestrial Theta (Angelica Ross) an alien-baby making facility (and faux 1969 moon landing set) was in full operation at Area 51. It was an experiment where both girls –Calico (Leslie Grossman), Kendall (Kaia Garber), Jamie (Rachel Hilson) and boys Troy (Isaac Powell) and Cal (Nico Greetham) were subjected to being impregnated and walking around like lost fashion models, clad in white from either Woody Allen’s Sleeper or Nic Winding Refn’s Neon Demon. Theta has been having her jollies killin’ babies as they’re being pumped out, because none of them met her ideal, that is until finally Kendall delivered a primo one tonight; the babe that would break the mold and ensure the future of the alien race. However, you dumb Eisenhowers! How could you? The aliens were never going to help the good ole U.S.A. They certainly undermined Nixon (the zany and hammy Craig Sheffer) and led to his undoing. While the U.S. presidents were too worried about Soviets, all the while they were giving carte blanche to the real enemy, the citizens of outer space. 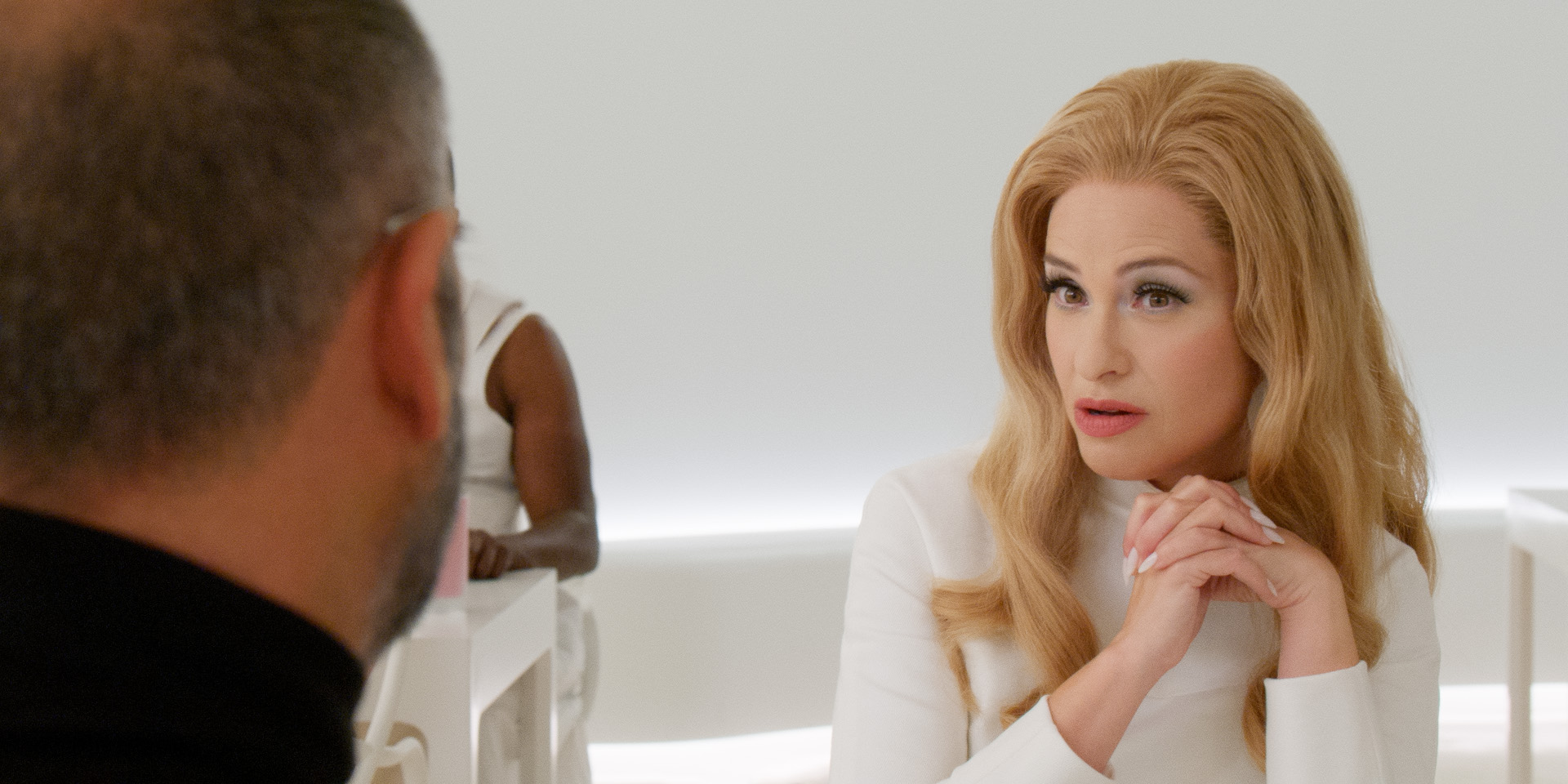 Following Ike’s death, Mamie is no, way, not for me; I wanna live forever. Her lover, alien Valiant Thorn (Cody Fern) [By the way, how gross! Ike has to walk in on them doing it in the penultimate episode] promises her that she can live infinitely at Area 51. Because that’s where all First Ladies go to retire. And what a fine life it is: Mamie gets to dress up like Mrs. Roper and have a bedroom that’s very chic, blanca circa 1970s, complete with a SWAT team protecting the underground. Mamie makes friends with Calico, however, when she gets wind of the alien takeover, she looks to kill Kendall’s first born…like stands over the crib with a scalpel. If someone is going to stop the future Hitler race, why, it will be Mamie. That is until Theta proclaims “Goodbye, Mrs. Eisenhower” and off goes her head. Calico remains the last woman standing in this new alien future. Casualties earlier in the episode are Troy, Cal and Jamie; the latter killed by Theta’s hench-woman after delivering a subpar baby.

Back when we interviewed Murphy at the end of season 9 of AHS 1984, he teased that season 10 was heading in a sci-fi direction, and he kept to that promise.

Where is season 11 bound to go? Murphy has hinted at two possible themes below –#AHSSirens or AHS: Bloody Mary– and has traditionally chosen next season’s AHS theme by Halloween. It’s still up in the air if Paulson returns. The criteria of AHS is that its stories are set in America. This despite the fact that we still think it would be really cool if AHS expands beyond its borders and does an homage to South Korean horror films.