Amber Heard’s defense in Johnny Depp’s $50 million defamation trial against his ex-wife kicked off today with bracing testimony on the danger signs of domestic abuse.

Collected in her tone and words in the Virginia courtroom after the lunch break on Tuesday, Dr. Dawn Hughes only mentioned the Pirates of the Caribbean actor and Aquaman actress once in passing in the first part of her time on the stand , but it was clear to all the building blocks the psychologist specializing in violence, abuse, and traumatic stress was putting in place in chronicling “the cycle of violence” and rising levels of abuse, including “sexual assault.”

In opening arguments in mid-April, Heard’s lawyers dramatically told Judge Penny Azcarte, the jury and other onlookers that out of the anger, drug and booze fueled behavior by the past Oscar nominee there was at least one sexual assault upon the actress by Depp during their 2013 to 2016 relationship.

With near expressionless Heard and a downcast Depp both looking on, Hughes methodically under questioning from lead defense lawyer Elaine Bredehoft laid out the criteria and patterns of domestic violence, psychical, verbal, emotional and sexual. Correspondingly, noting power dynamics and “gender symmetry,” the clinical and forensic psychologist detailed the “love bombing” response where gifts and other effusive behavior from a man follows abusive outbursts. Trying to take the sting out of audio tapes and Depp witness testimony the past two week on Heard’s own behavior Hughes made a point of noting that “woman may yell at her partner because she is angry” from being abused. 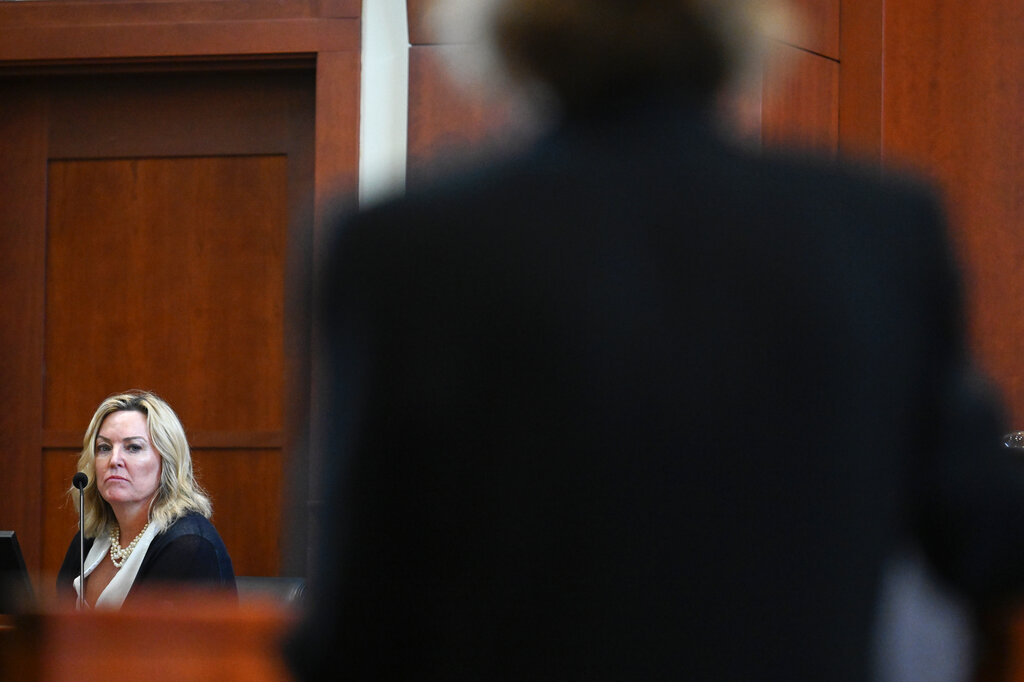 Highlighting “the appearance of normalcy,” Hughes aimed to puncture the expected common reactions to the “trauma” of abuse. The inside doesn’t match the outside,” Hughes said of the powerful role repression plays for many women who have been abused or are being abused.

“It very difficult for people to stand up and say something,,” she went on to tell Bredehoft of how family, friends and employees hesitancy to get involved in a couple’s abusive patterns even if I see a trashed window or a bruise. “ She added: “You have to examine context,” Hughes went on to say. Seeking to pull out another quiver in Depp’s team’s arsenal, the medical professional confirmed that women can become violent, often in situations of self-defense. As well, she said “we have to be careful” not the dismiss that there can be abuse of men by women, as well as abuse within same sex relationships. However, citing the statistics, she stressed the overwhelming majority of abusive and even fatal cases in America in 2022 are men hurting women

Brought on as the defense’s first witness, as Deadline exclusively reveled yesterday, NYC-based and board certified Hughes’ primary role in the case is to refute the testimony and diagnosis of Depp witness Dr. Shannon Curry. On the stand last week and holding her own pretty well under cross examination, Curry told the court that in her opinion Heard has both Borderline Personality Disorder and Histrionic Personality Disorder. Hired by Team Depp as an expert witness, LA-based Curry’s take on the Aguaman actress is mostly based on a single 12-hour session between Curry and Heard late last year.

As noted by Heard’s attorneys, the not board certified Curry’s evaluation of Heard having BPD in 2021 exactly matches the unofficial diagnosis that Depp hurled at his then partner in an argument from several years ago that an audio tape of was played for the jury last week.

In the trench warfare that the trial has become in its fourth week, blunting the claws of a negative clinical profile of their client is a clear top priority for Heard’s s Bredehoft and Ben Rottenborn-led legal team. Washing off any taint that Curry’s opinion may have put on the actress could significantly assist in resetting the narrative and tone of Heard herself to the jury before she takes the stand to tell her version of events.

The much delayed five-week long trial that started on April 11 all stems from Depp’s March 2019 defamation suit over the late 2018 Washington Post op-ed that Heard penned on being a survivor of domestic abuse. Even though the op-ed never actually mentioned Depp by name, the actor insisted that his ex-wife’s words were all about him and cost him big and well-paying roles. In fact, as has been evident throughout this case in the Fairfax County Courthouse, Depp says that he was the actual victim of abuse in the relationship with Heard, not her.

Of course, as effective or not as that line of argument has been for Depp and his legal team so far and the power of testimony from employees of his that a raging Heard swung at him more than once, two issues hobble them scoring a home run.

Firstly, Depp and Heard had a very public and restraining order defined divorce in 2016 which brought many of the issues of abuse as well as the actor’s booze and drug use into the public square. So, as much as the ACLU and others may have wished otherwise, Heard’s op-ed was old news on one level. Secondly, despite Depp’s ex-CAA agent and current talent manager Jack Whigham’s testimony that Depp has an option deal for $22.5 million for a sixth Pirates film, the plaintiff’s side can’t produce any paperwork or confirmation from Disney of such an agreement. On the other hand, after a disruptive and sometimes bloody stint for Depp on 2017’s Dead Men Tells No Tales, the defense put forth a variety of articles and inferences that the actor had been cut loose from the Jerry Bruckheimer EP’d franchise. Under questioning from Rottenborn during his own time on the stand, Depp admitted that even if Disney offered him “$300 million dollars” and more he wouldn’t want to return to make another Pirates flick.

Following a standard and essentially required practice in the Old Dominion’s judicial system, Heard’s team put forth a motion to strike after Depp’s case was concluded. As was expected, Judge Penny Azcarate rejected the motion and moved the case forward. The judge did not offer a ruling today on whether a defamation claim should survive regarding one of Heard’s tweets of the 2018 WaPo op-ed.

However, with the jury out of the room, the remarks by Depp lawyer Ben Chew over the motion and his pointing at nearby Heard left a bad taste with some on the other side. “Counsel was insulting,” a source close to Heard told Deadline today after the incident. “Counsel was condescending. Counsel was not telling the real story.”

In the context of stopping, before the trial began, Heard tried repeatedly to get the case dismissed or moved to another jurisdiction. Failing that, even before Depp lost his 2020 UK libel suit against Rupert Murdoch’s The Sun tabloid for calling him a “wife beater,” Heard filed a $100 million countersuit almost two years ago.

Having been in court every day the past four weeks, Heard is currently on track to be the second defense witness and begin her testimony tomorrow. Running Monday to Thursdays, the trial will hit the pause button next week as Judge Azcarte has a previously scheduled conference to attend.

That break could prove a benefit or a hinderance to the defense depending on where things are at the end of Thursday’s session. It seems obvious that the defense would want to avoid cross examination of Heard starting before the break in order to keep the ball and timeline in their court going into the trial’s final week – or not.