Zeta, now a tropical storm, has killed at least six people after bringing high winds, heavy rain and up to 10 feet of storm surge in some areas. The storm struck southeastern Louisiana as a powerful Category 2 hurricane on Wednesday, leaving millions without power along the Gulf Coast.

Three people in Georgia and one person in Alabama were killed when trees fell on their homes, authorities said. A 55-year-old man in Louisiana died after touching a downed power line, prompting the mayor of New Orleans to warn residents to let safety officials assess the storm’s damage, and a man from Alabama drowned in Biloxi, Mississippi.

As of Thursday afternoon, nearly two million people were still without power in Georgia, Louisiana, Oklahoma, Alabama and Mississippi. President Trump has approved disaster declarations for Louisiana and Mississippi. 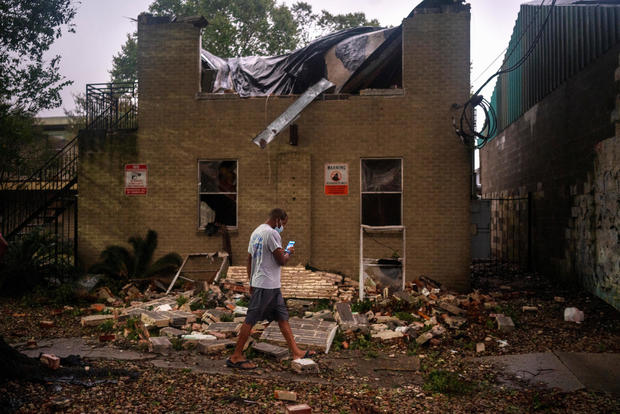 When the storm slammed into the Louisiana coast on Wednesday night with winds up to 110 mph, it inundated some regions with flash flooding, ripped the awning off a gas station, tore down a building’s wall and caused an apartment’s roof to collapse.

In Biloxi, where the storm had downgraded to a Category 1, Zeta knocked the steeple off a church as rising floodwaters prompted several evacuations.

“The house was flooding, the water was coming in really fast, and we didn’t know what to do,” one resident told CBS News.

The flooding was so severe that a sailboat washed onto the highway in Pass Christian, Bacchus said. Waveland, Mississippi, Mayor Mike Smith told CBS affiliate WLOX-TV that his city took the worst hit since Hurricane Katrina in 2005.

Zeta was the 27th named storm of what has been a record-breaking and devastating hurricane season, with many of the worst storms striking the Gulf Coast. As the presidential election looms, Louisiana Governor John Bel Edwards said polling places will be prioritized for returning power, Bacchus reported.

Tags: ala, National Hurricane Center
You may also like
Celebrities News