There are movies that make you feel seen. For Olivia Colman, that’s The Lost Daughter. In the feverish Netflix drama, the Oscar winner plays a divorced, middle-aged literature professor named Leda on a solo vacation in Greece. Lounging on the beach one day, she encounters an arresting but anxious young mother (Dakota Johnson) and soon starts reflecting on her own supposed shortcomings as a mother: how she snapped at her children during playtime, or felt quiet relief when she travelled out of town for work.

“It’s interesting to find out that you’re not alone,” says Colman, 47, who has three kids with writer Ed Sinclair, her husband of 20 years. “My family, I would die for them. But when they were smaller and I was exhausted, I had those moments of, ‘Just leave me alone for a minute’ or ‘Put the telly on’ — which I disagreed with, but (to hell with) it sometimes. And you felt bad, because you were that mummy who was trying to sleep on the floor.” 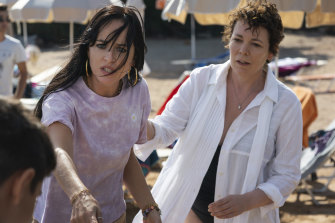 “You’re like the 10th person to say to me, ‘I used to fall asleep when I was playing with my little kids,’” says Maggie Gyllenhaal, the film’s writer and director, sitting with Colman at a hotel. “I was like, ‘Me, too! They’re OK, they’re right next to you.’ Sometimes you’re just like, ‘I need to close my eyes for a minute.’”

Nominations have been lavished on The Lost Daughter, as well as Colman, since its debut at Venice Film Festival in September. Colman earned best actress nods from the Critics Choice and Golden Globe awards, while Gyllenhaal was nominated for best director at the Globes.

“I hadn’t played a Leda before, or seen a woman like her depicted so honestly on the screen, so that was intriguing,” Colman says of the character, who craves more time to devote to her studies and whose eyes wander when she meets a celebrated scholar (Peter Sarsgaard, Gyllenhaal’s real-life husband). The actress is heavily expected to earn her third Oscar nomination after a nod for last year’s The Father opposite Anthony Hopkins. In 2019, she won her first statue playing the acid-tongued Queen Anne in The Favourite.

Gyllenhaal, 44, adapted the film from Elena Ferrante’s 2008 book. She read the novel years ago and felt it said things “I had never actually heard out loud about being a mother, a lover and a thinking woman in the world.” (She shares two daughters — Ramona, 15, and Gloria Ray, 9 — with Sarsgaard.)

“I’ve spent so much of my life reading books, hearing songs and seeing movies where women are represented in a way that is actually more a fantasy of what we’re like,” Gyllenhaal says. “There’s so few representations that feel real, that you start to think, ‘Maybe there’s something wrong with me?’”

Gyllenhaal shoots and edits The Lost Daughter like a horror movie, with close-ups of a younger Leda (Jessie Buckley) suffocating from her children’s cries and screams. Years later, Leda confesses to a stranger that she doesn’t feel like a “natural mother” and that it felt “amazing” when she left her family behind. But ultimately, “I went back because I’m their mother and I missed them,” Leda says. “I’m a selfish person.”

“There aren’t many actresses who could make that (“natural mother”) line work,” Gyllenhaal says. “Leda is sometimes very abrasive and pushing people away, and the movie asks you to consider things that are painful. So I wanted her to also be funny and warm and have blood in her veins, and that’s Olivia.”

Despite the character’s complexities, “I’ve really enjoyed that so many women have said, ‘It’s really honest,’” Colman says. “I haven’t read any reviews because I’m nervous, but I do love what people have said straight after (film festival screenings). It’s beautiful — it’s a gift, really. ‘This happens and it’s OK.’” 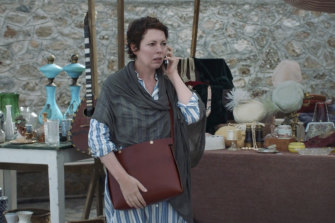 Olivia Colman is expected to get a third Oscar nomination for her role as Leda.

It’s not just women who relate to the film, either: “Fathers have come up to me with an equal sense of relief,” Buckley, 32, says later by Zoom. And some people have been haunted by it and just go, ‘Oh, my God, I need to run home to my children’ or ‘Oh, thank God I’m not such a bad parent.’”

“The only thing we decided on was an accent,” Buckley says. “Then we would just get together at the end of the evening and drink lots of bottles of rosé.”

The film shot last year on the Greek island of Spetses, where the close-knit cast (which also includes Paul Mescal and Ed Harris) formed a quarantine bubble amid COVID-19.

“I’ve never been on a more idyllic set,” Colman says. “We got on so well, which is lucky, because we were on an island and literally couldn’t escape each other. We spent the evenings listening to guitar, we drank and we forgot to learn our lines for the next day. And it was fine!“