A 100ml glass of wine, carefully measured each week, is all Sophie drank after learning she was six weeks pregnant with her son, now aged 16.

Following years of watching him struggle at school, the family received a shock last year when he was diagnosed as having fetal alcohol spectrum disorder (FASD). 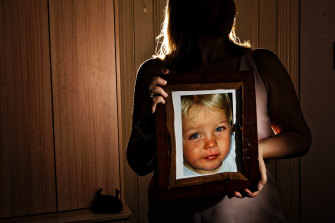 Sophie, who asked not to use her full name to protect her son’s privacy, is sharing her story to raise awareness about FASD.Credit:Trevor Collens

“When you look back with hindsight, we realised at a fairly early age there were things he couldn’t do,” she said.

“Things like learning his colours and learning numbers and days of the week, he would forget them once he learned them. We just always played to his strengths. He was always very active, very busy. And we just took all of that as parents to be part of who he was.”

Sophie, who asked not to use her full name to protect her son’s privacy, is sharing her story to raise awareness about FASD, a group of conditions that can occur if a mother drinks alcohol during pregnancy.

The Foundation for Alcohol Research and Education (FARE) will on Tuesday launch a $27 million, federal government-funded advertising campaign advising women to stop drinking as soon as they start trying for a baby after research found many remained unaware of the risks.

Television, radio, social media and billboard advertisements will drive home the message that “every moment matters”, with even small amounts of alcohol posing a danger to the developing brain from early in a pregnancy.

“Everything you drink, your baby drinks, at any stage of pregnancy,” the television advertisement says. “Any amount of alcohol can damage their developing brain and organs.”

Health Minister Greg Hunt said the federal government was committed to raising awareness of FASD, which is the leading non-genetic developmental disability in Australia, and the risks of drinking alcohol during pregnancy.

“We can all play a role in supporting women and families to have healthy pregnancies and in raising awareness of FASD,” Mr Hunt said. “‘Every Moment Matters’ highlights the risks of drinking alcohol during pregnancy, to inform the broader community that alcohol should not be consumed during pregnancy.”

FARE chief executive Caterina Giorgi said the campaign, which is based on National Health and Medical Research Council guidelines stating that women should not drink while pregnant, aimed to address misinformation about alcohol and pregnancy.

In February, a survey by research firm Kantar of almost 1500 Australian women who were pregnant, planning a pregnancy or would consider having a baby if they fell pregnant in the next two years found 29 per cent were unaware that drinking alcohol during pregnancy could cause FASD.

Almost half (51 per cent) were not aware that alcohol could cause harm in the first weeks after conception, while 69 per cent did not know alcohol crossed the placenta to the developing baby.

Sophie began to suspect FASD as the cause of her son’s symptoms after learning there was no known safe level of alcohol to drink while pregnant, but her concerns were initially dismissed because she had consumed it at only low levels.

While she drank at a number of social events before finding out she was pregnant, she had always been told this could not have damaged her son. It was not until his problems at school escalated that she started looking for answers.

“When he got to about the age of 11, that’s when it became very apparent,” she said. “He suddenly was completely failing all of his tests.”

Sophie’s son had been assessed for ADHD, dyslexia and dyscalculia, but was found not to have them and did not display signs of autism. He was initially assessed as “significantly educationally at risk”, but without a specific learning disorder. Impaired executive function – mental skills including planning, working memory and organisation – made it hard to concentrate at school.

“He’s very clever and very socially clever. So he would work it out from friends, copy their work, without anybody realising,” she said.

Since her son’s FASD diagnosis, the family has focused on supporting his strengths.

“He is very outdoorsy and hands-on, very practical,” she said.

For more information about drinking alcohol while pregnant, visit everymomentmatters.org.au, call the NOFASD hotline on 1800 860 613, the Alcohol and Other Drugs hotline on 1800 250 015 or speak to a health professional.