A woman has shared the ‘most embarrassing moment of her life’ involving nudity at a sauna as a tonic to cheer people up in the midst of the coronavirus pandemic.

Writer Anbara Salam, who grew up in London and now lives in Oxford, took to Twitter to share her hilarious tale of woe, which happened 10 years ago.

Yesterday she recounted how, while on holiday in Germany with an ex-boyfriend, she visited a spa with a sauna which required guests to be naked.

Explaining that she speaks no German, Anbara told how she stripped off and grabbed a small towel before going through an unmarked door – which unbeknownst to her led to the fire escape. 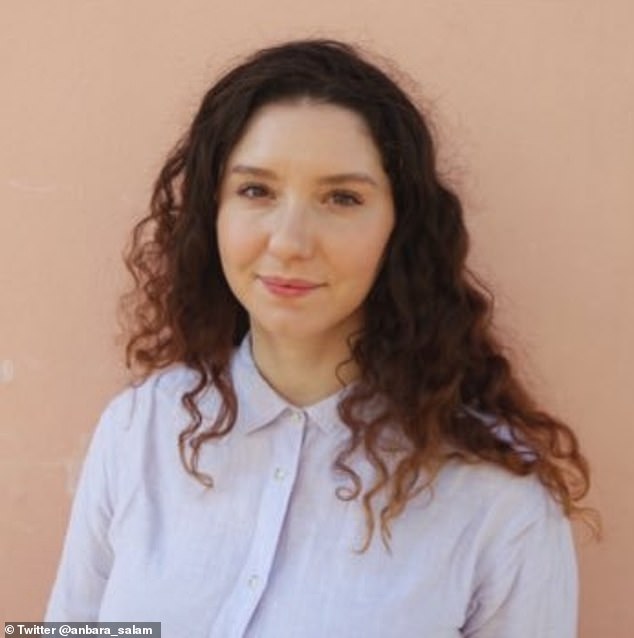 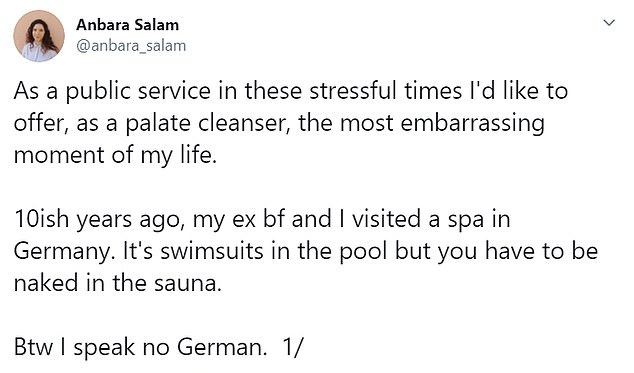 The writer, who grew up in London and now lives in Oxford, took to Twitter to share her hilarious tale of woe, which happened 10 years ago

The door then shut behind her, leaving her trapped there ‘in the nip’.

Her situation went from bad to worse when she was finally discovered by a spa employee, and led out of the building, along the street and back through a busy reception to return to the changing room – all while still desperately trying to cover her modesty with a small towel.

Her series of tweets went viral, attracting hundreds of thousands of likes, while many Twitter users branded her a ‘hero’ for giving them a good laugh.

Beginning her story, Anbara wrote: ‘As a public service in these stressful times I’d like to offer, as a palate cleanser, the most embarrassing moment of my life. 10ish years ago, my ex-bf and I visited a spa in Germany.

‘It’s swimsuits in the pool but you have to be naked in the sauna. Btw I speak no German.’ 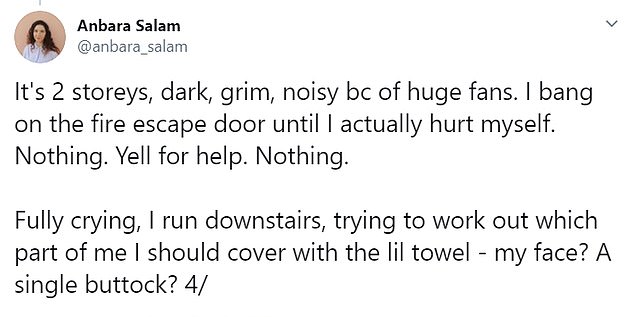 Anbara’s series of tweets, which explain how she came to be stuck naked on the fire escape, went viral, attracting hundreds of thousands of likes

She went on to explain how she and her boyfriend agreed to meet in the cafe – but when she tried to enter the sauna, she took the wrong door and ended up trapped on the fire escape.

‘I bang on the fire escape door until I actually hurt myself. Nothing. Yell for help. Nothing. Fully crying, I run downstairs, trying to work out which part of me I should cover with the lil towel – my face? A single buttock?

‘Bang on the second floor doors for 10 mins. Yell some more. Nothing. On the ground floor there’s an unlocked door. Jackpot! But no, it’s a terrifying machine room with massive fans and pumps and “electrocution” symbols on everything.

‘Friends, there’s nothing quite like running, naked and crying, around an industrial machine room.’

Becoming desperate, Anbara spotted a service lift and ran into it and pressed all the buttons in ‘sheer panic’ while ‘covering each boob in turn’.

Once in there she spotted a security camera, and admitted to feeling torn about wanting someone to find her but not wanting anyone to see her in this state.

After a few rides up and down there was a German loudspeaker announcement.

‘I just *know* it’s about me,’ Anbara wrote. ‘Like “the naked girl in the fire escape lift please stop mashing the buttons” or whatever, but I can’t understand it, so just cry louder and gesture at the camera.’

When the lift doors finally opened, Anbara told how a spa employee was waiting for her with no towel and led her out of the building, around the corner and back through a busy reception area.

Eventually, after being asked for ID and having to surrender her lobster to make it back through the turnstiles, Anbara is reunited with her boyfriend – who apparently ‘had the audacity to be grumpy because he’d been waiting for an hour’

‘I now have an out of body experience,’ she went on. ‘A shame black out. I have reached my max. I go fully through embarrassment and out the other side. Time slows down. I can hear the music of the spheres.

‘I stop crying, drop the washcloth, shoulders back, head high, follow him along the street, past people parking their cars, standing in line with their families. People say things, point. I cannot hear them. I am transcendent with shame. Untouchable.

‘Reception is BUSY. So busy he has to yell at people to make way so I can get through the crowd. The guy explains (I’m guessing) the situ to the receptionist. This takes actual minutes. An old lady gives me her pool float. It is shaped like a lobster. The claws rest on my boobs.’

Eventually, after being asked for ID and having to surrender her lobster to make it back through the turnstiles, Anbara is reunited with her boyfriend – who apparently ‘had the audacity to be grumpy because he’d been waiting for an hour’.

Many Twitter users thanked Anbara for sharing her experience, with one writing: ‘Thank you so much for making me laugh. It’s been a sad day as I’m not able to go to my darling brothers wedding this Sat and my brother in law is ill. Your toe-curling experience was side-splittingly funny , not for you at the time but thanks for sharing.’

Another commented: ‘God bless you for sharing one of the greatest embarrassment stories I have ever heard. Do you still cringe thinking about it?’

And one quipped: ‘You can’t make that up ..Hilarious! Thanks.’

Published author Anbara, who was a runner-up in the 2019 Berlin Writing Prize for her book Circus Freak, has a new book – Belladonna – due out this summer.

Published author Anbara, who was a runner-up in the 2019 Berlin Writing Prize for her book Circus Freak, has a new book – Belladonna – due out this summer