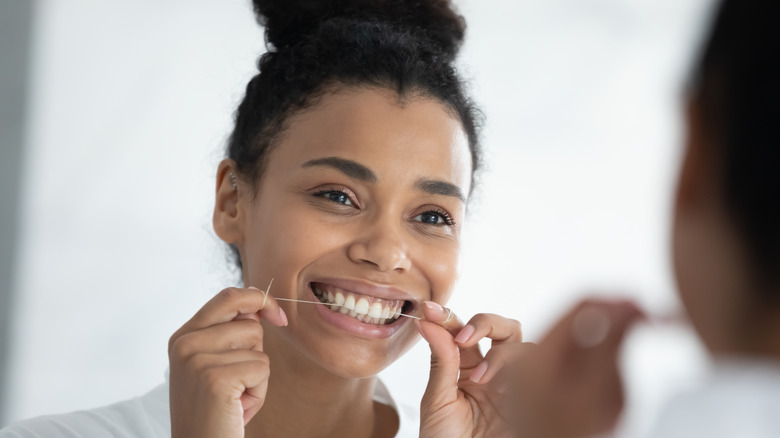 We reuse our toothbrushes every single day, and while it is generally recommended that we replace them every three months or so, we use them a few times a day to remove plaque, bacteria, and food particles from our teeth. As such, it is recommended we keep them clean by running them under hot water after each use and either soaking them in antimicrobial mouthwash or using a UV toothbrush sanitizer occasionally to keep them clean (via Healthline).

While reusing toothbrushes is normal and there are ways to keep them clean, reusing other oral hygiene products is not a good idea. Take floss for example. Floss is meant for one-time use, and so it isn’t made to withstand harsh methods of sanitizing like soaking it in mouthwash as you might do your toothbrush. As such, reusing floss generally means reusing floss that hasn’t been cleaned between uses, and that’s a very, very bad idea.

Why reusing floss is a bad idea 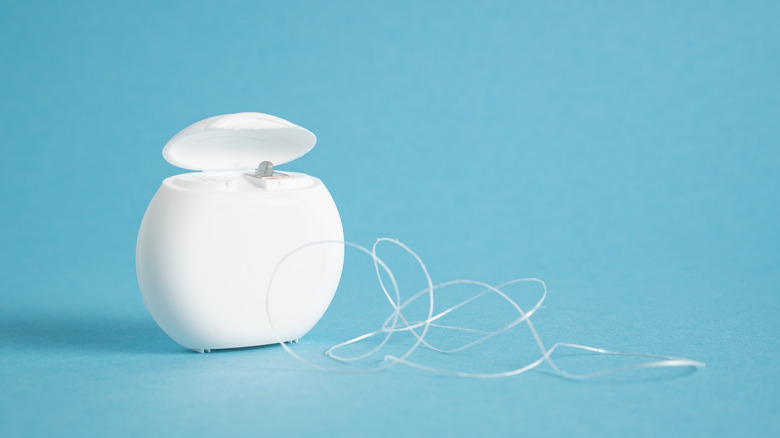 If you find you are running low on floss, we understand the thought of reusing it for a day might cross your mind, but it’s probably safer and healthier to just skip flossing for a day than it is to reuse an old piece of floss (via The Chart). Not only would reusing the floss reintroduce the bacteria you had removed from between your teeth back into your mouth, but depending where you stored the floss, it is also likely to deposit new types of bacteria into your mouth. Yuck!

Further, because floss is only intended for single use, it doesn’t hold up well. It is likely to seriously deteriorate after one use, and so even if you found a way to somehow clean or attempt to sanitize it, the floss would likely snap or thread on you, making it useless and potentially messy (via Anoka Dental).

Flossing is certainly a healthy habit and doing it regularly can cut down on the risk for all sorts of issues from gum disease to heart disease (via Mayo Clinic), but if you’re running low, just skip it for the day rather than trying to reuse the floss from yesterday.

Tags: never, Reuse, should, why, You
You may also like
Celebrities News