Good Girls is one of the best shows you probably haven’t watched.

Or maybe you have now, if you’re one of the people who caused the show’s fourth and final season to trend on Netflix when it dropped this month. As a longtime fan of the show, it was heartening to see, especially after feeling like I was screaming into the void whenever I talked about the show and was met with blank stares from usually pop culture-savvy friends. 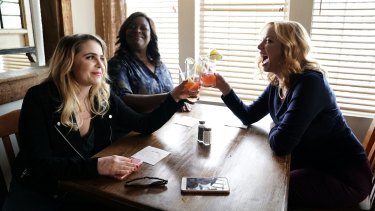 Full of nuance and frivolity, Good Girls is one of the best shows on Netflix. Credit:NBC

Over the years, I’ve been surprised that more people weren’t watching and talking about Good Girls. It’s entertaining, addictive and has a great cast including Christina Hendricks, Retta, Mae Whitman and Matthew Lillard. Not to mention the fact that it bears so many similarities to one of the most watched and talked about shows of all time: Breaking Bad.

Both shows are about desperate suburban parents who find themselves in dire financial straits due to a broken capitalist system and who turn to crime in order to solve their problems. In both, we watch the main characters morph from ordinary, well-intentioned members of the community to murkier, more sinister criminals who willingly – even happily – do terrible things.

Part of the issue is the way our culture in general treats serious and dramatic stories as more worthy, while comedy is often seen as lesser – even though it’s much harder to make someone laugh than it is to make them cry. But at the heart of it is also the fact that men’s stories are deemed serious and worthy, while women’s can be treated as less important, even frivolous.

Interestingly, this is where Good Girls′ greatest strength lies. The show leans into the frivolous and feminine, not just in tone, but in character and plot, too. It takes assumptions and stereotypes about womanhood and motherhood and cracks open the layers contained within them, and the power they can hold.

It’s there in the very premise: the last people you’d expect to become armed robbers and money launderers are three suburban mums who usually spend their time focused on carpools and bake sales. The three women use that to their advantage and are able to evade suspicion many times over. Even when their activities arouse police interest, the show’s other characters assume they’re just accessories to the men in their lives – not the masterminds behind the whole operation. 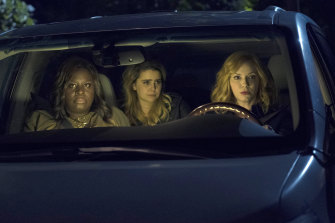 The crimes the women commit and the way they carry them out are also grounded in the feminised world. They launder their money through shopping at big box stores, enlist the help of other women in a pseudo-multilevel marketing scheme, and utilise their knowledge of beauty products, baking, crafts and literal laundry to print money. All the while, the men in their lives struggle with their actions, and the shifts in power dynamics, and consistently create new problems for the women. It makes for a fascinating interrogation of gender dynamics and the way toxic masculinity undermines women.

With the show not renewed for a fifth season, it’s too late for a true sense of closure on Good Girls. But the journey it takes over four seasons is still well worth the ride, and definitely worth talking about.

Who needs prestige TV anyway, when there’s so much nuance – not to mention fun – to be found in the frivolity.

Tags: as, girl’s, Good, Is, why
You may also like
Celebrities News