Whatever shiny fad is “taking the school lunch time by storm”, says Matt Zeremes, one half of the creative duo behind ABC ME’s International Kids’ Emmy-winning hit, Hardball, there’s one game sure to outlast the lot.

“Handball was being played when we were kids,” agrees co-creator, Guy Edmonds. “It’s being played now. It will probably still be played in another 20 years. So the core of the show will hopefully never date.” 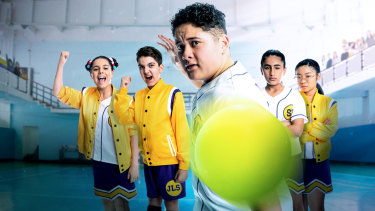 Hardball: virtually everybody has redeemable qualities.Credit:

Semisi Cheekham, the 14-year-old star of the comedy series set in a Western Sydney primary school where handball unites and divides its diverse pupils, has noticed a resurgence in the game’s popularity, along with a slight name change.

For a decade, Edmonds and Zeremes, who met at QUT’s acting course in Brisbane, had been tossing around the idea for a series about an unlikely outsider (Cheekham’s New Zealand-born Mikey) making waves across the ditch with his gift for swift returns on the quadrangle.

“We wanted to make something that we would enjoy,” says Zeremes. “I’ve got three kids so I’ve sat through a whole lot of content. We wanted to show the realities of the mean old school yard.”

“School is tough, right?,” says Edmonds. “It’s not all roses. Kids are working themselves out – who they are and what they stand for. The drama in the schoolyard can be pretty epic. We wanted to mine that but also show that virtually everybody has redeemable qualities, if you’re willing to look hard enough.”

Some of the humour comes from the trans-Tasman culture clash. Many an “NZ-ism” is absorbed into the local lingo, and vice versa. Cheekham, who moved to Australia when he was seven, says his New Zealand relatives who watch the show on TVNZ tease him for his Australian accent. The sole cast member with no prior acting experience, his audition tape was a “standout”.

“He just seemed like he could take it or leave it,” says Zeremes. “Mikey is a character who is generally unfazed by stuff. He’s always got a positive spin and it takes a lot to get to him. Semisi is an absolute champion of a guy. In season one, he only had one day off in the whole shoot. I’ve seen actors struggle with that kind of workload but he didn’t bat an eyelid.”

Already in high school, Cheekham isn’t likely to film a third season of Hardball, unless, as the creators half joke, it’s renamed Hardball High. For viewers also approaching the “end of an era” that season two is all about – leaving primary school and possibly friendship groups for the next phase of education, Cheekham has this advice:

“Don’t be scared! I was actually a bit worried about what high school would bring. But if you go in, make good friends, stay on top of your assignments, never leave it to the last minute – which I’ve learnt the hard way – and enjoy it, high school will be a fun time.”

Tags: ABC, Come, Emmy-winning, Mes, why
You may also like
Celebrities News