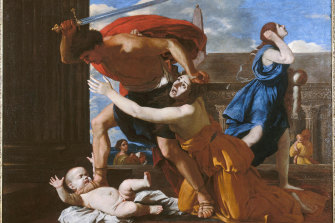 The Massacre of the Innocents, ca. 1628-1629. Found in the collection of the Musée Condé, Chantilly. Credit:Fine Art Images/Heritage Images/Getty Images

Every era of art is defined by its divisions and contrasts and we each have our preferences. Is it possible to love Beethoven and Mozart equally? Can one feel the same admiration for Tolstoy and for Dostoevsky? What about Picasso and Matisse?

In the visual arts, the age-old distinction is between line and colour. Commentators would write about the line of Michelangelo and the colour of Titian, or the line of Ingres and the colour of Delacroix. “Line” usually meant drawing or composition while “colour” was a measure of expression. The masters of line were seen as cold, cerebral and calculating, while the colourists were passionate and energetic. One artist worked from the mind, another from the heart.

There are hot and cool kinds of jazz and hot and cool artists. Jackson Pollock is the very model of a hot painter, whose swirling, dancing rhythms defined ‘action painting’. His contemporary, Mark Rothko, was decidedly cool: withdrawn, meditative, tragic, a creator of soft-edged rectangles of paint soaked into the canvas. 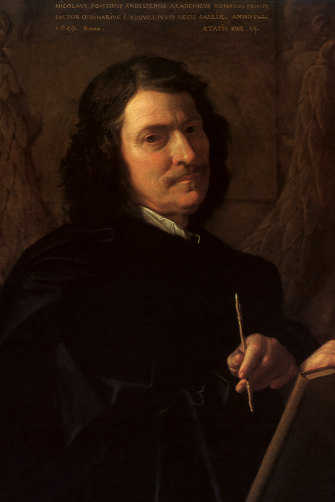 Nicolas Poussin was known for his austere style.Credit:Picturenow/Universal Images/Getty

In Poussin as a Painter, Richard Verdi comes to the defence of a great French classicist renowned for his froideur – not coldness, but more like a sense of reserve. Nicolas Poussin (1594-1665) has had this reputation since the late 1600s when a dispute raged between the Poussinists (“drawing and the ideal”) and the Rubenists (“colour and naturalism”). The French Academy was split between those who favoured the bravura of Peter Paul Rubens (1577-1640) and those who preferred Poussin’s more austere style. 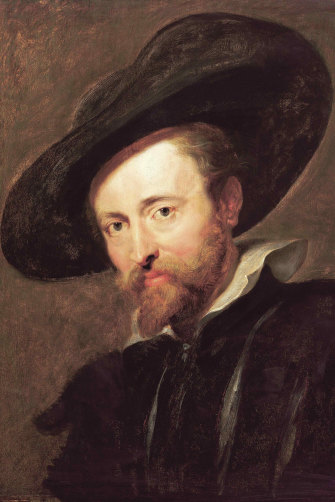 Peter Paul Rubens, here in a 1630 self-portrait, was known for a more bravura style.Credit:Heritage Images/Getty

When the connoisseur Roger de Piles compiled his Balance of Painters (c.1708), in which he ranked famous artists for composition, drawing, colour and expression, he scored Poussin poorly alongside Rubens. It was the beginning of a period in which the artist’s popularity suffered and quantities of his work were sold to the English and the Germans.

It took the French Revolution to restore Poussin’s fortunes in his native country. The leading painter of the era, Jacques-Louis David was an admirer and an emulator. The Jacobins saw Poussin’s idealism and rigidity reflected in their own severe moral code. The artist would remain a great favourite under Napoleon Bonaparte, who once declared: “Our school is feeble, one must return to think in the ways of Poussin.” 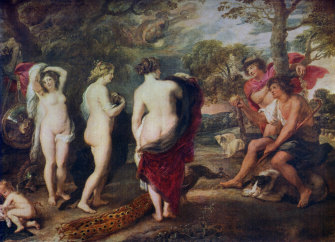 Poussin rated poorly behind Rubens in a 1708 survey: ‘The Judgement of Paris’ by Rubens, one of 22 versions.Credit:Getty

Since then, Poussin’s fan club has continued to flourish, although it is an elite establishment. Among artists, he has been praised by the likes of Reynolds, Constable, Turner, Cezanne, Derain and Picasso, but his greatest appeal has been among art scholars. Verdi is happy to endorse the view that Poussin is “the painter for people of intelligence”, but he also discerns an “intensely aspirational art, capable of inciting the viewer to seek and inhabit a better world”. 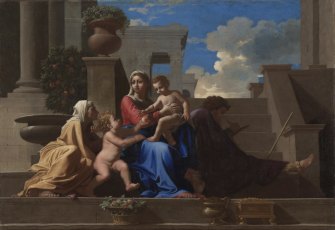 The Holy Family on the steps by Poussin (1684)Credit:Heritage Images/Getty

Poussin was the favourite artist of connoisseur-turned-spy Anthony Blunt, who admired “his classical ideals of reason, harmony, balance, economy, moderation, clarity and concentration”.

If these are the qualities one values most in an artist then Poussin reigns supreme. His paintings are constructed with an exacting sense of composition that ensures even the smallest details contribute to the whole. In Landscape with the Body of Phocion Carried out of Athens (1648), one may draw a diagonal line that starts with the stretcher bearer in the left foreground, and ascends in stages, passing a single figure, then a trio of smaller figures, before grazing the tip of a distant building. It’s maddeningly precise but only one element in a complex design that allows us to journey in our minds along the path upon which Phocion’s body has been carried.

Poussin was always adding architectural elements that helped with his harmonies. In Eliezer and Rebecca (1648), the well at which the Biblical meeting takes place has been equipped with an angular column topped by a mysterious stone sphere that allows a visual rhyme to be sustained throughout the composition. It’s the Old Master equivalent of Hitchcock’s Maguffin – the device that exists only because it was needed by the plot. 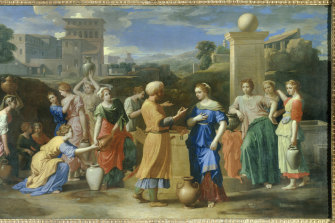 In Poussin’s ‘Eliezer and Rebecca’(1648), the well at which the meeting takes place has been equipped with an angular column topped by a mysterious stone sphere.Credit:Getty

There is a solid, stately feeling about Poussin’s classicist paintings, never to be found in the swirling, fleshy extravagances of his baroque rival, Rubens. This quality emerges to its best advantage in paintings such as The Arcadian Shepherds (1638-40) and The Holy Family on the Steps (1684), where the monumental simplicity of the figure groupings makes a powerful impression on the viewer.

In more ambitious crowd scenes the rhythms and connections are mind-boggling in their complexity, but despite the drama, one always struggles to find the breath of life in Poussin’s paintings. To the Victorian critic, John Ruskin, these “ghastly” works were “never impressive”. Even Delacroix, who held his forebear in high esteem, complained that Poussin’s figures looked as if they were “cut out”, never quite “melting together”.

It’s the Old Master equivalent of Hitchcock’s Maguffin – the device that exists only because it was needed by the plot.

One finds this stiffness everywhere in Poussin’s paintings. His figures resemble statues, with gestures and expressions of frozen melodrama. This is apparent in a work such as The Holy Family with Ten Figures (1649), where the central group looks as if has been snipped out and glued onto an antique cityscape. The impression is boosted by the family’s brightly coloured robes, in primary shades of red, blue, yellow, plus white.

I confess I’ve often tried to like Poussin’s work but struggle with its enduring stoniness and those bursts of outlandish colour that only make matters more unsettling. It’s disarming then to encounter the sincere enthusiasm of writers such as Richard Verdi, who find proof of the artist’s genius in those same aspects of a picture.

Herein lies the paradox of Poussin: a perfectionist who pushed his works so far towards the ideal that they became not just unnatural but almost the antithesis of nature. Put one of his figure paintings alongside a Caravaggio and they seem cartoon-like. His immaculate compositions are claustrophobic in their precision, crying out for that touch of incompleteness the Japanese know as wabi-sabi. 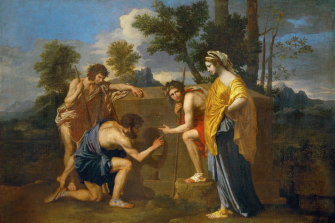 The Arcadian Shepherds (Et in Arcadia ego), circa 1638, can be found in the Louvre.Credit:Heritage Images/Getty

In Poussin’s work, one may savour the spectacle of a cool painter working hard to keep his hot impulses at bay. This reflects the personality of an active, romantic youth who became a grave, peintre-philosophe. He will use colour as a code that draws attention to the most important figure in a painting, such as the Virgin Mary, usually shown in robes of eye-popping red and blue. Verdi finds that the “chilling classicism” of Poussin’s The Massacre of the Innocents (c.1627-28) “only serves to intensify the anguish and cruelty of the scene”. But it’s a singularly weird picture, featuring a sword-wielding soldier in a hot red cloak stepping lightly on a bulky baby while the mother, in a golden dress, stares open-eyed and open-mouthed – all against a backdrop of a clear blue sky. The art historian, Walter Friedlaender, called the work “static” – a supreme put-down for such an action-packed scenario.

Verdi quotes the artist’s claim that he “could sing different tunes at the same time” but in many instances, his immaculate compositions display an unsettling dissonance. The telltale use of colour denotes a passionate temperament seething beneath a cool and classical façade. It’s ironic that contemporary viewers may not appreciate Poussin for his much-vaunted perfection, but those moments of anarchy that jolt us out of our visual complacency.

Richard Verdi, Poussin as a Painter: From Classicism to Abstraction, Reaktion Books, 366pp, $79.99

The Booklist is a weekly newsletter for book lovers from books editor Jason Steger. Get it delivered every Friday.

Tags: 'Better, Did, It, or, Poussin, who
You may also like
Celebrities News