Whether it’s a snap of your WiFi password or silly selfie, there are often times when we wish our photos and videos would quickly disappear from a chat.

Now, WhatsApp has launched a new feature called View Once, which causes your photos and videos to ‘self-destruct’ once they’ve been opened.

The feature differs from the recently-launched ‘Disappearing Messages’ feature, which causes messages to disappear within seven days of being opened.

The Facebook-owned app hopes the new feature will make it easier and safer for users to send sensitive information.

If you don’t see the feature yet, don’t panic – WhatsApp says it will be rolling out to users worldwide by the end of this week. 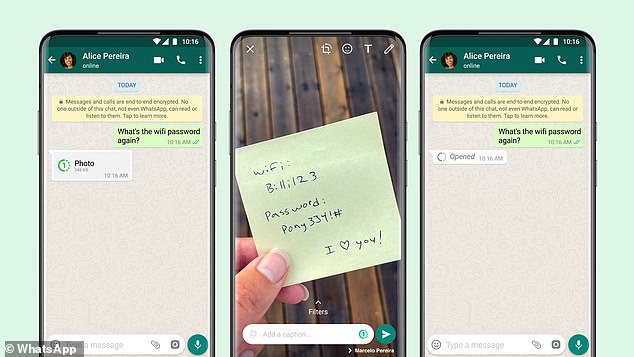 WhatsApp has launched a new feature called View Once, which causes your photos and videos to ‘self-destruct’ once they’ve been opened

How to send a View Once photo or video

1. Open an individual or group chat

2. Tap ‘Camera’ to take a photo or video, or select one from your Albums

You’ll see an Opened receipt in the chat once the recipient has viewed the photo or video.

WhatsApp announced the new feature in a blog today.

‘While taking photos or videos on our phones has become such a big part of our lives, not everything we share needs to become a permanent digital record,’ it explained.

‘On many phones, simply taking a photo means it will take up space in your camera roll forever.

‘That’s why today we’re rolling out new View Once photos and videos that disappear from the chat after they’ve been opened, giving users even more control over their privacy.’

As with all messages sent on WhatsApp, any View Once photos or videos will be protected by end-to-end encryption, ensuring only you and the person you’re communicating with can read or listen to what is sent.

WhatsApp reassured: ‘With end-to-end encryption, your messages are secured with a lock, and only the recipient and you have the special key needed to unlock and read them.’

View Once photos and videos will also be clearly marked with a new ‘one-time’ icon.

Once the recipient has viewed the media, the message will appear as ‘opened’ to avoid any confusion about what was happening in the chat at the time.

And while standard photos and videos are automatically saved to the recipient’s camera roll, WhatsApp reassures that View Once media will not be saved.

WhatsApp added: ‘We’re rolling out the feature to everyone starting this week and are looking forward to feedback on this new way to send private and disappearing media.’ 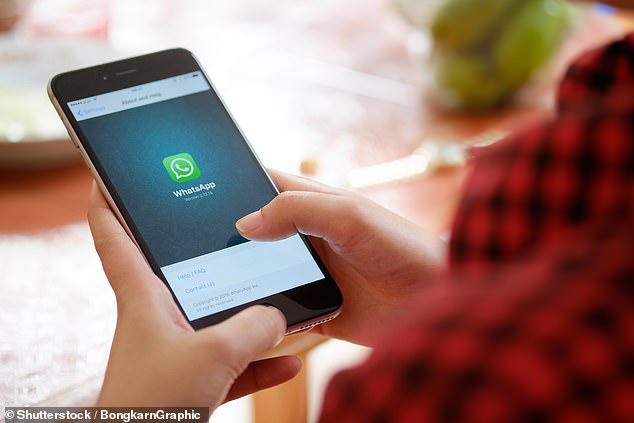 As with all messages sent on WhatsApp, any View Once photos or videos will be protected by end-to-end encryption, ensuring only you and the person you’re communicating with can read or listen to what is sent

Several excited users have taken to Twitter to discuss the new feature.

One user wrote: ‘Really am loving this “view once” thing on WhatsApp,’ while another added: ‘view once option on whatsapp omg i’m gonna have fun with this.’

Meanwhile, another joked that some users are likely to use the feature to send saucy photos.

‘Whatsapp added that view once feature for pictures. Nudes are going to move,’ they wrote.

The View Once launch comes shortly after WhatsApp introduced ‘disappearing messages’, which vanish after seven days.

Either user can activate the feature for themselves, while in group conversations the admin user will have control.

‘We’re starting with seven days because we think it offers peace of mind that conversations aren’t permanent,’ a WhatsApp spokesperson said.

This can be done ‘while remaining practical so you don’t forget what you were chatting about,’ they added.

‘The shopping list or store address you received a few days ago will be there while you need it, and then disappear after you don’t.’

If you’re considering deleting WhatsApp, you’ll be happy to hear that there are several alternative apps to choose from:

With more than 400 million users, Telegram is one of the most popular WhatsApp alternatives.

While it looks very similar to WhatsApp, what sets it apart is the fact that it gives the option to set messages to self-destruct after a given period of time, leaving no trace.

However, as a WhatsApp spokesperson pointed out, Telegram ‘does not offer end-to-end encryption by default so it’s not necessarily more secure than WhatsApp’.

Signal is one of the most secure messaging apps, thanks to the fact that it is open-source.

This means that the code for the app is publicly available to view, making it near-impossible for the app’s creators to sneak in any backdoors that could allow governments or hackers to spy on your messages.

If you use an iPhone, you may consider simply switching to iMessage, Apple’s own messaging app.

The app has a number of impressive features included no character limits, the ability to send pictures and videos, and of course Apple’s animated emoji feature, Animoji.

Unfortunately, iMessage is only available for iPhone users, so you’ll struggle to interact with anyone using an Android.

The app replaces your standard SMS app, and integrates with all of Google’s apps and services, making it easy to share images or use Google Assistant.

If you were put off using WhatsApp due to its sharing of data with Facebook, Facebook Messenger may not be the best option for you.

However, the app offers a number of helpful features, including games, secret conversations and video calls.