The trailer for Zack Snyder’s alternate take on 2017 bomb Justice League lit up the internet this week.

My Twitter timeline is suddenly filled with excited people screaming, “He did it! He totally said, ‘We live in a society.’” Explain this. Welcome to the new trailer for the upcoming blockbuster, Zack Snyder’s Justice League, aka, the #SnyderCut. The line in question, improbably uttered by Jared Leto’s Joker at the end of the trailer, is a surprise nod to one of the internet’s most enduring memes. 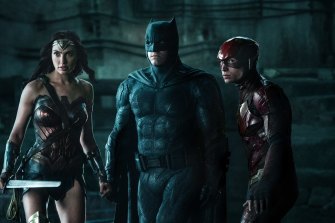 Ugh, memes. Forget I asked, nevermind. Essentially, The Joker – Batman’s anarchic foe – has long been an heroic figure for the internet’s most bitter outcasts, a symbol of freewheeling chaos against sick, social indifference. Angry online nerds would earnestly quote the Joker, borrow his avatar, revel in his wanton nihilism to demonstrate their contempt for us zombie-fied sheeple, what with our girlfriends and boyfriends and cherry-topped milkshakes and whatnot.

Look, really, it’s fine, I think I understand. As pop culture site Junkee explained back in 2019, meme-makers soon “began skewering the elitist, faux profound tone” of such internet edgelords with a simple phrase that mocked their diatribes: “We live in a society.”

Oh OK, that explains it, tha- Back in 2019, as Joaquin Phoenix’s Joker was due for release, another online funnybones even started a Change.org petition urging studio Warner Bros to make Phoenix utter “We live in a society” in the film.

“What I have in mind is a scene where the Joker sees a kid in a restaurant playing Fortnite on his phone while his grandfather is reading a book, and he looks at them and says, ‘Damn, we live in a society.’ He may say this line as he looks into the camera thus breaking the fourth wall,” the petition explained. The petition earned over 50,000 signatures and everyone laughed.

Cool. Have you finished explaining memes yet? Cut to the viral reaction to this week’s #SnyderCut trailer, which was knowingly shared on Twitter by Joker Jared Leto himself using the infamous line. Understandably, it’s a momentous occasion for internet dwellers when a Hollywood blockbuster acknowledges their goofy memes. The trailer is now the top-trending video on YouTube, with over 13 million views in 24 hours.

Can you back up a second: what even is a “#SnyderCut”? It’s director Zack Snyder’s upcoming version of 2017’s box office bomb, Justice League. Snyder, whose daughter Autumn tragically died during the making of the original film, was replaced on the project by Joss Whedon, who undercut Snyder’s traditional dark sensibilities with humour and a brighter tone. In February 2020, Warner Bros acceded to fans’ demands they release the long-rumoured alternate version that honoured Snyder’s vision. Snyder’s restoration, reported to have cost an extra $US70 million ($90 million), is now due for release in the US on March 18 on streamer HBO Max. (Australia doesn’t have HBO Max and local release details are still forthcoming.)

“Snyder’s vision”. Didn’t people hate this guy’s movies less than a decade ago? Correct. While 2013’s Man of Steel was a box office hit, it copped a drubbing from both critics and disappointed comics fans. “Zack is a hack” was a regular message board on IMDB, and brutal hate-blogs like Snyder’s Superman Sucks echoed the prevailing rhetoric. After the failure of his visually insane Sucker Punch, some critics even posited that Snyder should be dropped from his DC projects altogether in favour of Christopher Nolan.

Why were people so unkind? Let’s blame Marvel. After the sombre tone of Christopher Nolan’s Dark Knight trilogy, comics fans gravitated towards the lighthearted, mirthful, escapist fun of things like Iron Man, Thor, and Guardians of the Galaxy. Snyder’s dead-serious treatment of comics as modern-day myths, heavily stylised aesthetics, and obsession with evoking 9/11 in his films’ final battles weren’t so appreciated.

So this is an unlikely feelgood development, then? Sure, in the sense that an underrated big-screen auteur appears to finally be getting his due respect. But you do realise that the #SnyderCut is 240 minutes long?

Geez, what is wrong with this blowhard? And so the cycle begins again.

Tags: #SnyderCut, and, the, What’s, why
You may also like
Celebrities News