"If you take that away there's going to be restlessness, and we'll have to find other ways to deal with it," Mackay says. 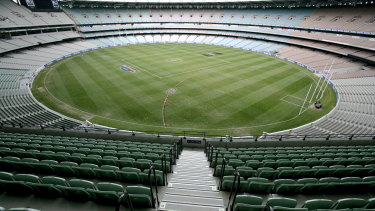 Coronavirus, however, hangs like a sword of Damocles over the head of the country's two biggest football competitions. Just one case of a player with COVID-19 could be enough for it to come crashing down and bring the season screeching to a halt.

A winter without football, you ask? The thought is almost too much to bear for many Australians for whom sport provides a sanctuary. Some may argue now is not the time for games – others say now is when they are most needed. 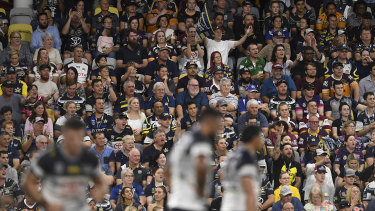 Fans are being locked out from the NRL due to the coronavirus pandemic.Credit:Getty

"I can't imagine a weekend with no sport in Australia – I don't really want to," says Jess Richards, a lecturer at Western Sydney University who has published numerous articles on sports fandom.

"When you look at the role sport plays in Australia – it's that weekly comfort we get from the stressful world. I just don't know how Australians will cope with no footy on the weekend."

Why is sport so central to the Australian way of life? And what will happen if, as is increasingly likely, the people do not get their fix?

Mackay, who has researched Australian society since the 1960s and was awarded an Order of Australia in 2015 for his work, argues the love of sport is not intrinsic to this country alone. One only needs to witness Brazil's obsession with the round ball to see this.

He traces it back to our "primitive tribal origins". Sport, he says, especially the football codes, represent the battle or the hunt.

"These blokes, and increasingly women, are out on the paddock representing for us something that's really deep in our cultural origins," Mackay says. "Namely, they're at war with each other or they're hunting, and the ball is the animal."

The heroes in our team's colours now get the adulation once saved for those who used to wear armour. Their feats are discussed in almost every setting: in pubs, at the water cooler on a Monday morning and, more recently, on social media and online chat groups.

Even the most ardent fans would acknowledge sport does not really matter, yet at the same time it forms a central part of their lives. It is not uncommon for AFL diehards to plan their social calendar for the year around their team's fixture.

"The thing about sport is it's so emotionally rich. After the weekend everyone is either a bit up or a bit down depending on how their team went but next week it could be reversed," Mackay says.

In these troubled times, "next week" may be many weeks away. Fans will need to find another outlet for their stress. Then there is the social aspect.

Dr Adam Karg is an associate professor at the Swinburne Business School in Melbourne and has conducted extensive research on the relationship between AFL clubs and their members. Football brings a sense of community, he says.

"When you think about everyone who goes to games, yes there are the hardcore diehard fans, but the majority go for the social experience and want to spend time with family and friends," Karg says. "It's a huge opportunity for different behaviours to grow and for different rituals."

Karg sees an opportunity for e-sports, or professional video gaming, to fill part of the void, even if it will be palatable to only a small fraction of fans.

"There will be a lot more people glued to video game screens to get the thrill of the chase, hunt, the kill, all the symbolic stuff sport does for us [that] is cathartic for a lot of people," Mackay says.

"Some people will try and compensate through video games, especially violent video games, which is not a good outcome."

Worse still is the prospect of violence, and not of the virtual kind. "More people will just swing a punch," Mackay says.

There are already concerns amongst domestic violence service providers that the coronavirus pandemic may lead to more cases, as keeping people at home in isolation makes it harder for victims to escape abuse.

"I think there could be an increase if the outlet of sport was taken away," Mackay says. "I hope I'm wrong about that."

And the upsides? If people cannot watch others kick a ball, perhaps they will kick one themselves at the local park with their friends or children, Mackay says.

Or maybe their tribal sense of belonging could lie within their own postcode instead of being with the red and white of St George or the Swans.

"It's a bit idealistic," Mackay says. "Some people might get the urge to reconnect locally and to start thinking about the neighbourhood and the community they belong to, as opposed to the sporting tribes, and think 'maybe I ought to go see that old lady on the corner who needs me to mow her lawn'.

"If I could wave a magic wand and get the best outcome from this loss, that would be it."

Tags: Can’t, get, happens, We, what, when
You may also like
Celebrities News