WEST HAM were already shock contenders for a top four finish – but now they have penalties on their side is there any stopping them?

David Moyes’ men were the only club in the top flight not to have been awarded a spot-kick this season so they had been doing it the hard way so far. 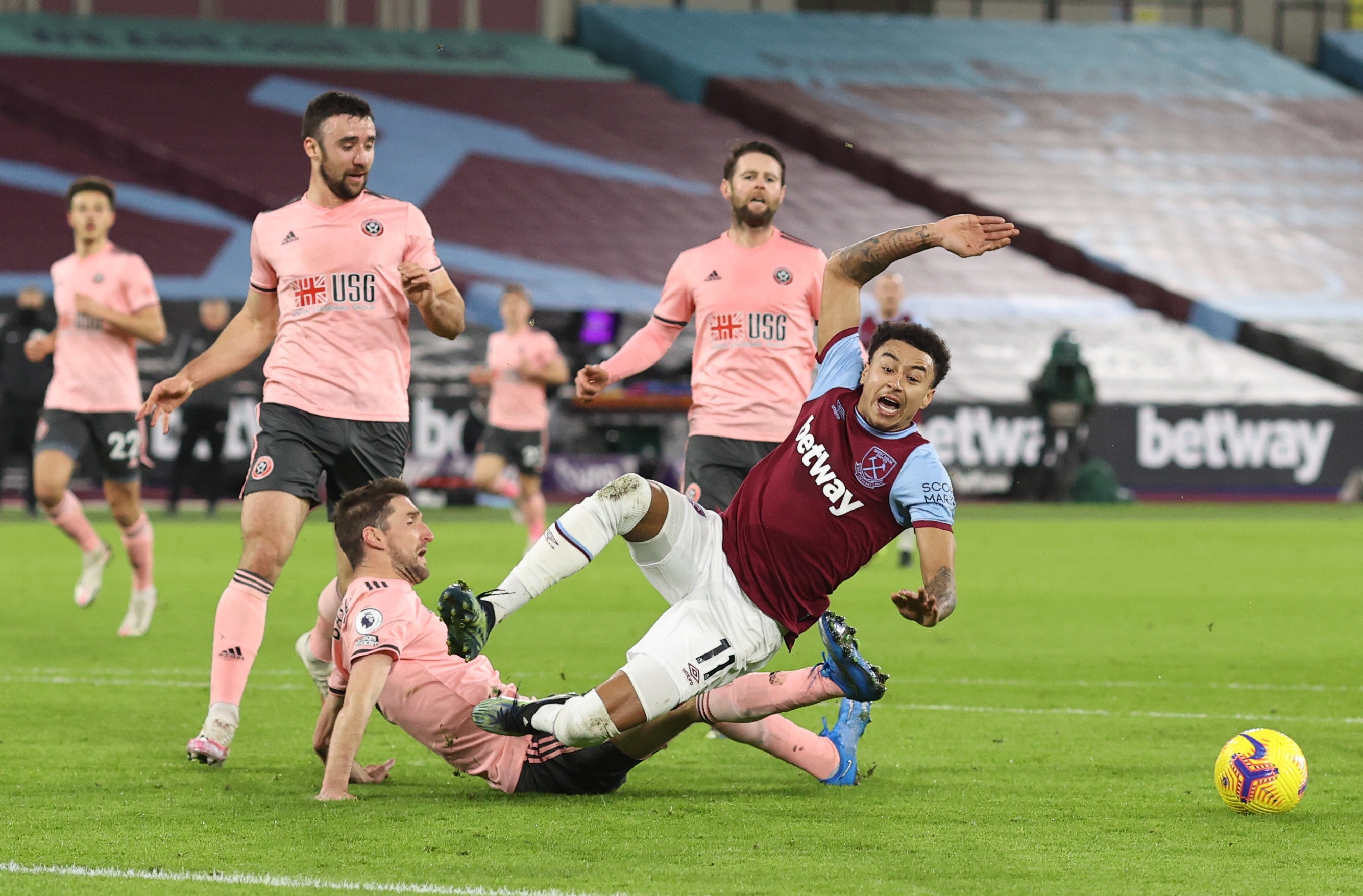 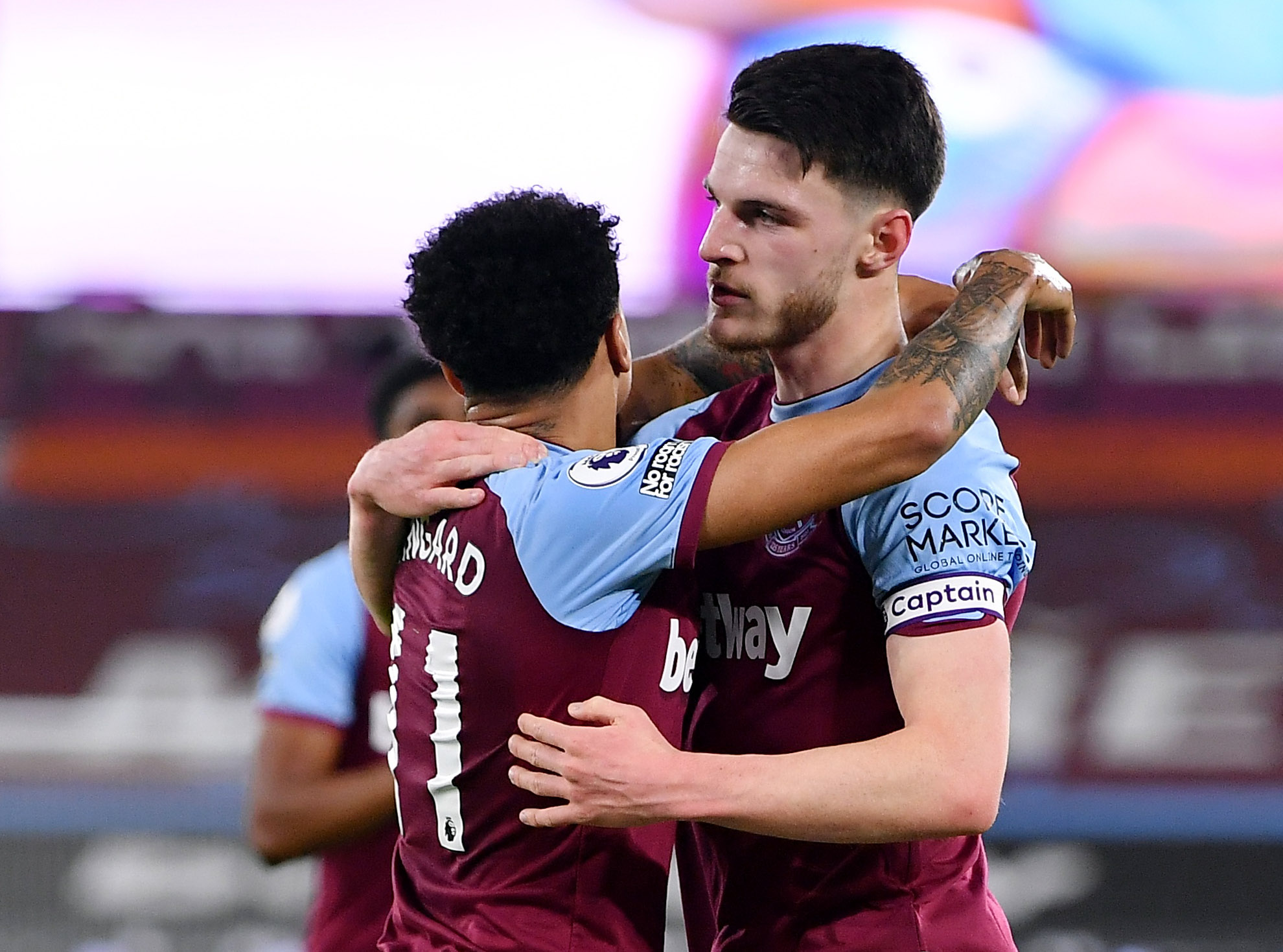 But they finally broke that duck thanks to Chris Basham’s ludicrous foul on Jesse Lingard which gifted the Hammers the lead after 39 minutes of toil – and that was enough to send them on the way to a win which saw them climb above Liverpool in the table.

Declan Rice was the man who converted their first penalty in 25 games, and by the time Issa Diop headed them further ahead just before the hour they knew they had done enough to close the gap to Manchester United and Leicester to four points.

Tougher tests follow, with Tottenham and Manchester City the next games ahead – but all they can do is keep on picking up the results and who knows where it will take them.

It would help them if they could rely on Michail Antonio’s fitness, but the forward’s hamstrings again meant he missed out, leaving Moyes without a striker to call on.

What they needed to do was make a bright start against the Blades, and that almost came their way as early as the fourth minute when West Ham thought they had finally broken their penalty duck.

Rice had stung the palms of keeper Aaron Ramsdale, and John Egan’s clumsy challenge on Craig Dawson left ref Simon Hooper no choice but to point to the spot.

But just as Rice prepared to take the penalty, so VAR Michael Oliver messaged through to say Dawson had strayed marginally offside as the free-kick was taken, so the Blades were able to breathe a sigh of relief.

A run of six wins from nine coming into this game had given Chris Wilder’s side some confidence again, and they attacked like a team happier in themselves than in past games this season. 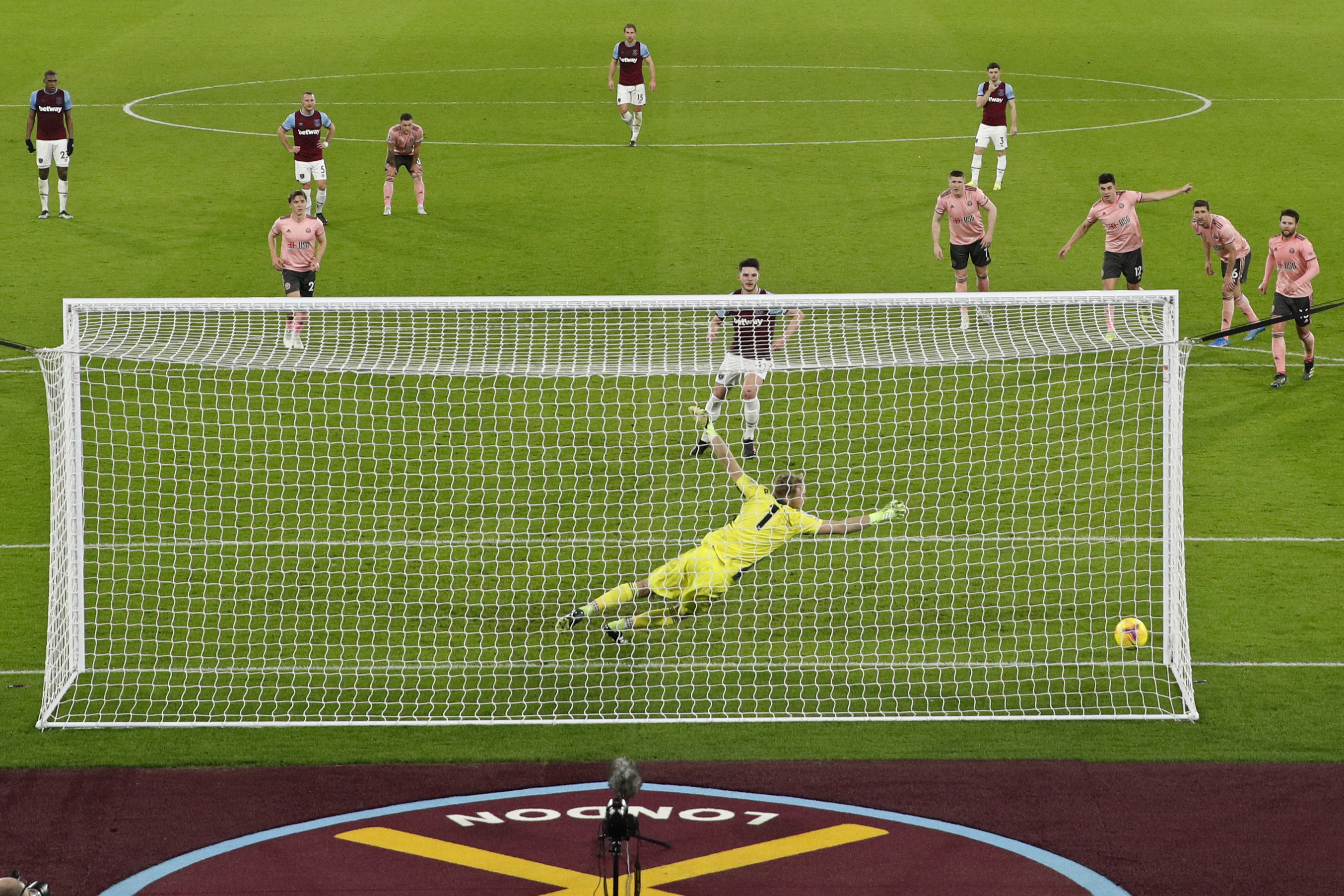 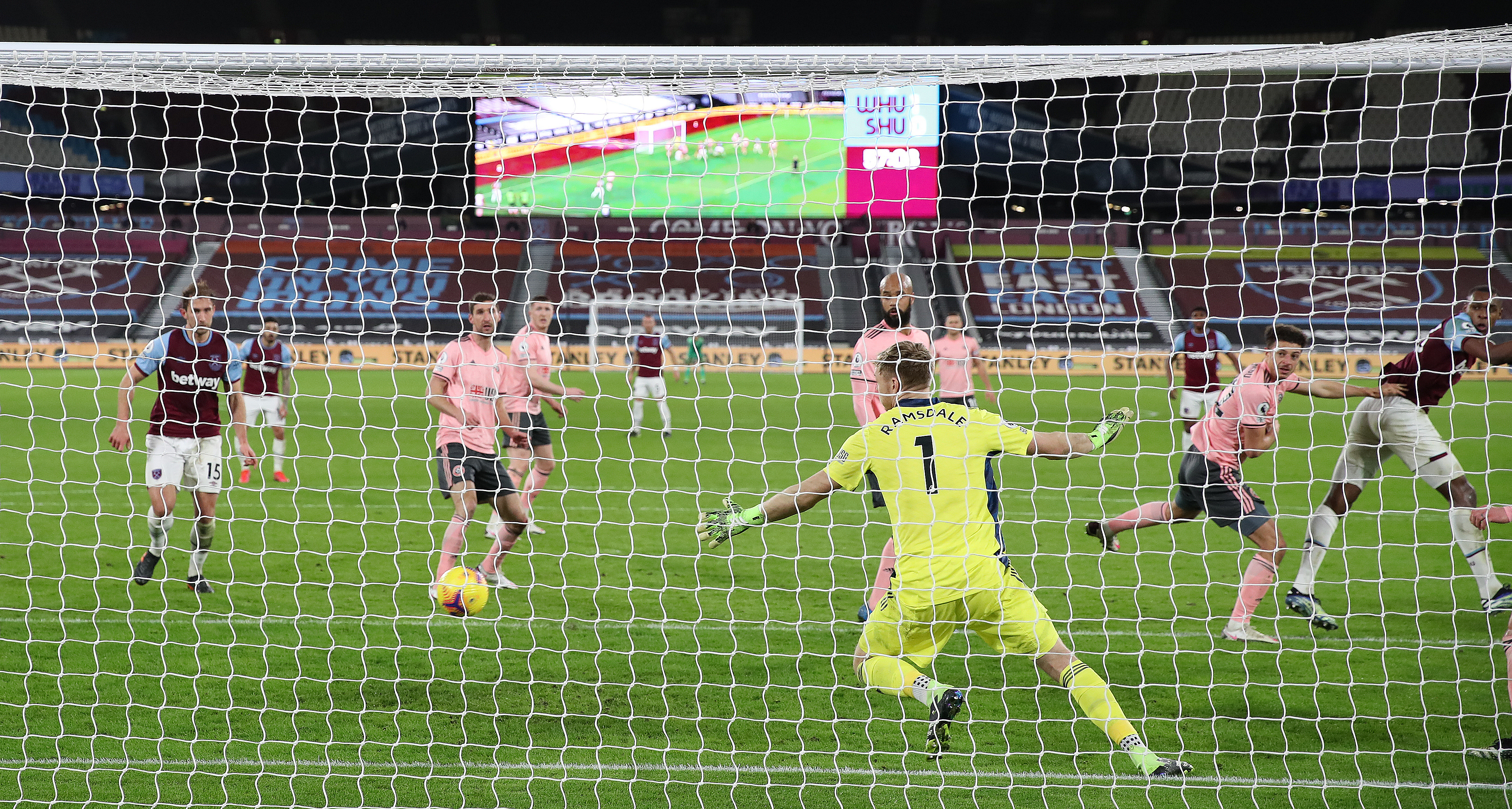 They served notice of their danger when David McGoldrick just failed to get on the end of Basham’s cross from the right.

And then an Oliver Norwood corner caused confusion in the Hammers six yard box, and Dawson was fortunate to see his header pass just wide of his own net under pressure.

In his first home appearance since arriving at the club, Lingard was looking West Ham’s most obvious attacking threat – and a 24th minute counter attack saw him break into the box on the left

Wilder’s strugglers started to get comfortable, and when Ben Osborn saw his low drive tipped wide by Fabianski they were sniffing a surprise lead.

But all their hard work was undone six minutes before the break when Basham’s comical challenge sent Lingard tumbling in the area and this time there was no VAR reprieve.

Rice made no mistake from the spot, and once again the Blades found themselves chasing the game.

They ought to have levelled on 52 minutes when Billy Sharp picked out McGoldrick with a cross, but the striker’s header deflected off the back of Ben Johnson and Fabianski twisted to touch the ball over.

How they were made to pay, as within six minutes West Ham doubled their lead – and again the defending of the bottom side left a lot to be desired. 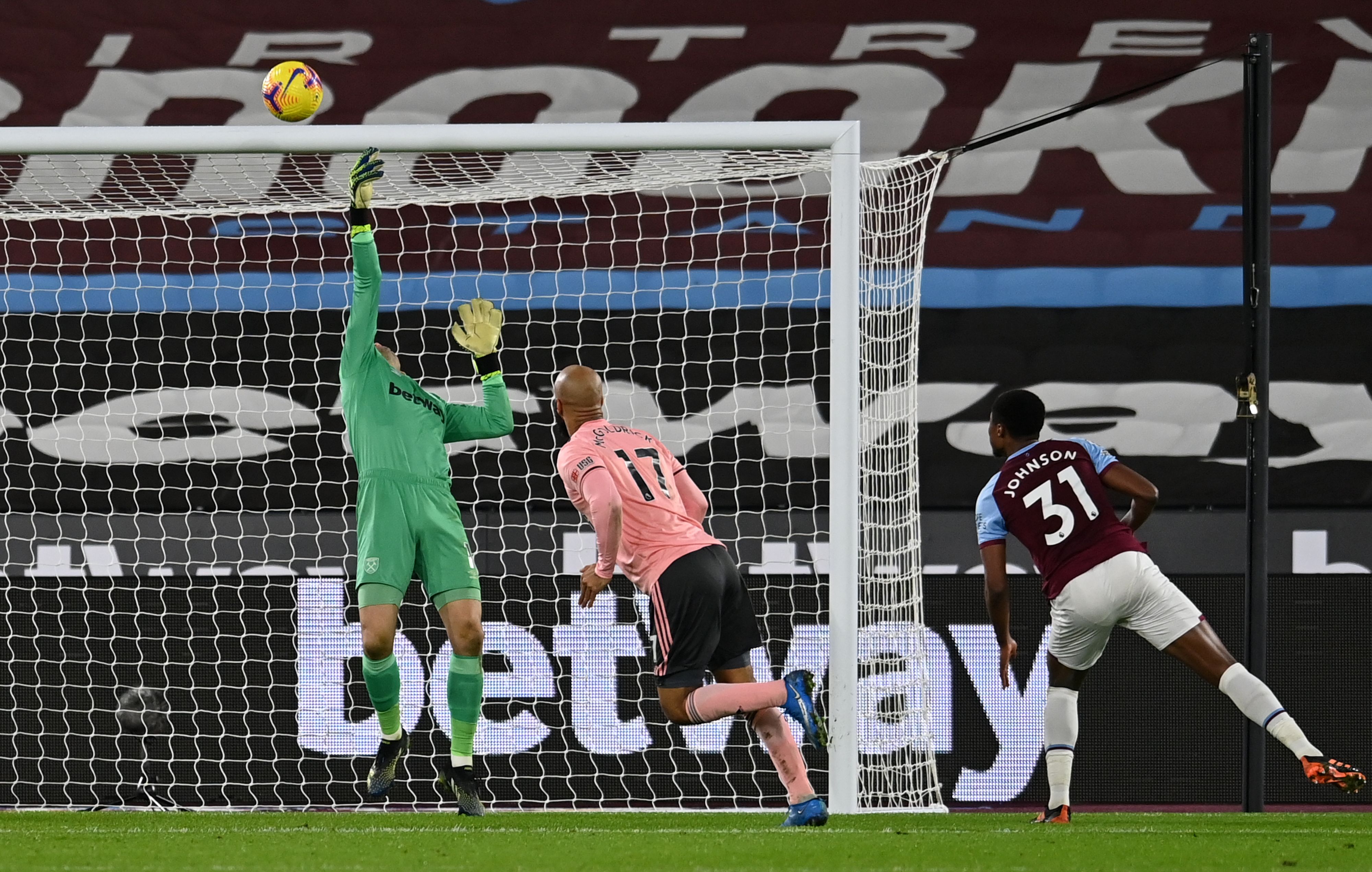 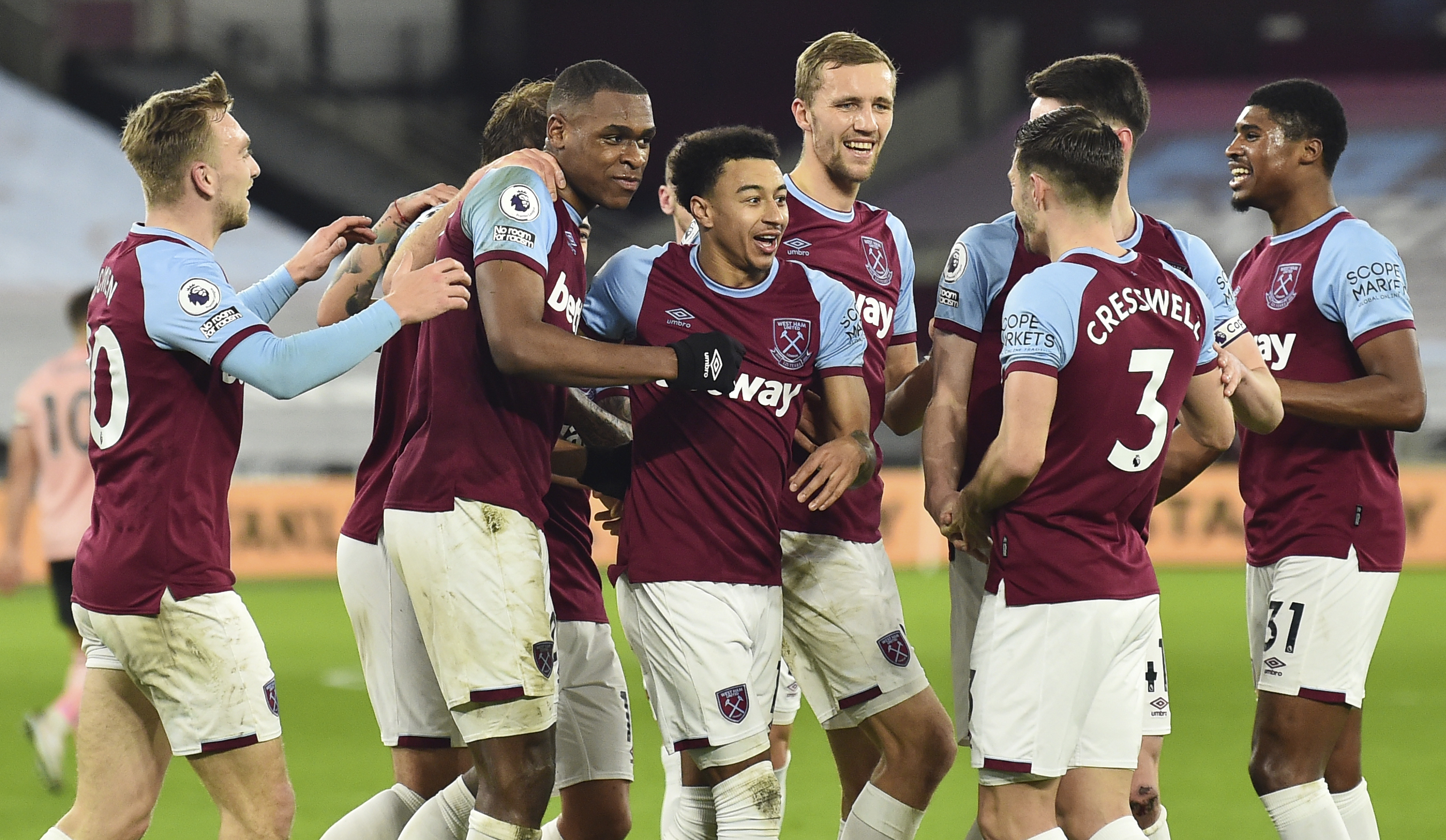 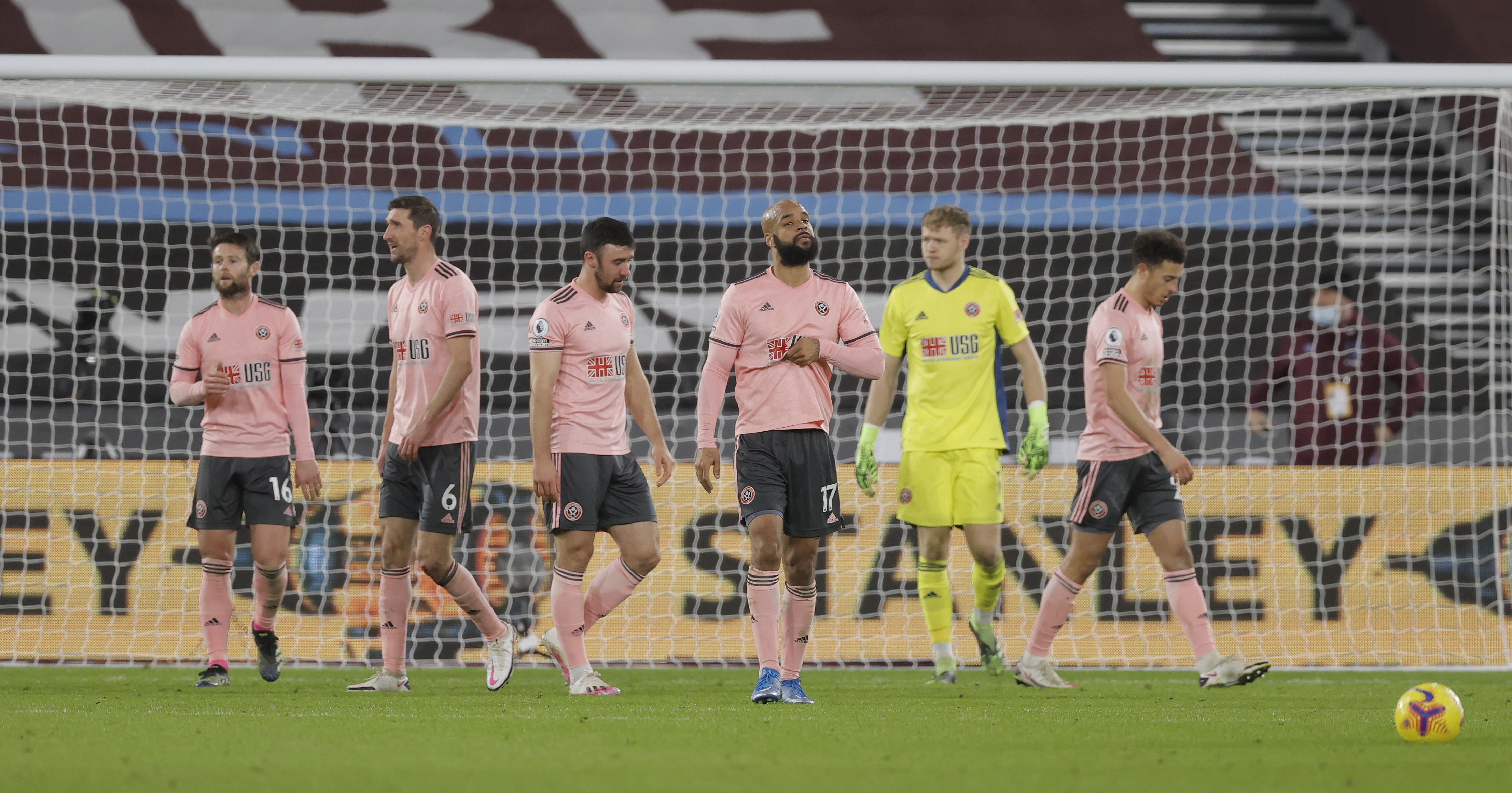 Aaron Cresswell whipped in a corner from the left and Diop was allowed a free run to glance a header into the far corner.

McGoldrick was having one of those nights strikers fear, for he spurned another chance to score on 69 minutes with a close range header which allowed Fabianski to save when the opportunity should have been buried.

Ramsdale then kept the score respectable with a point-blank stop to deny Vladimir Coufal as the Hammers again found it too ease to break through the Blades defence.

Things only got worse for the visitors when Egan left the field on a stretcher with his right leg in a splint, having bravely blocked a shot from Lingard.

And in stoppage time some smart work from Said Benrahma set up fellow sub Ryan Fredericks to add a third.

The damage was done long ago for Wilder and his side, but this defeat only speeds up their inevitable relegation.

For West Ham, their fate is yet to be decided. 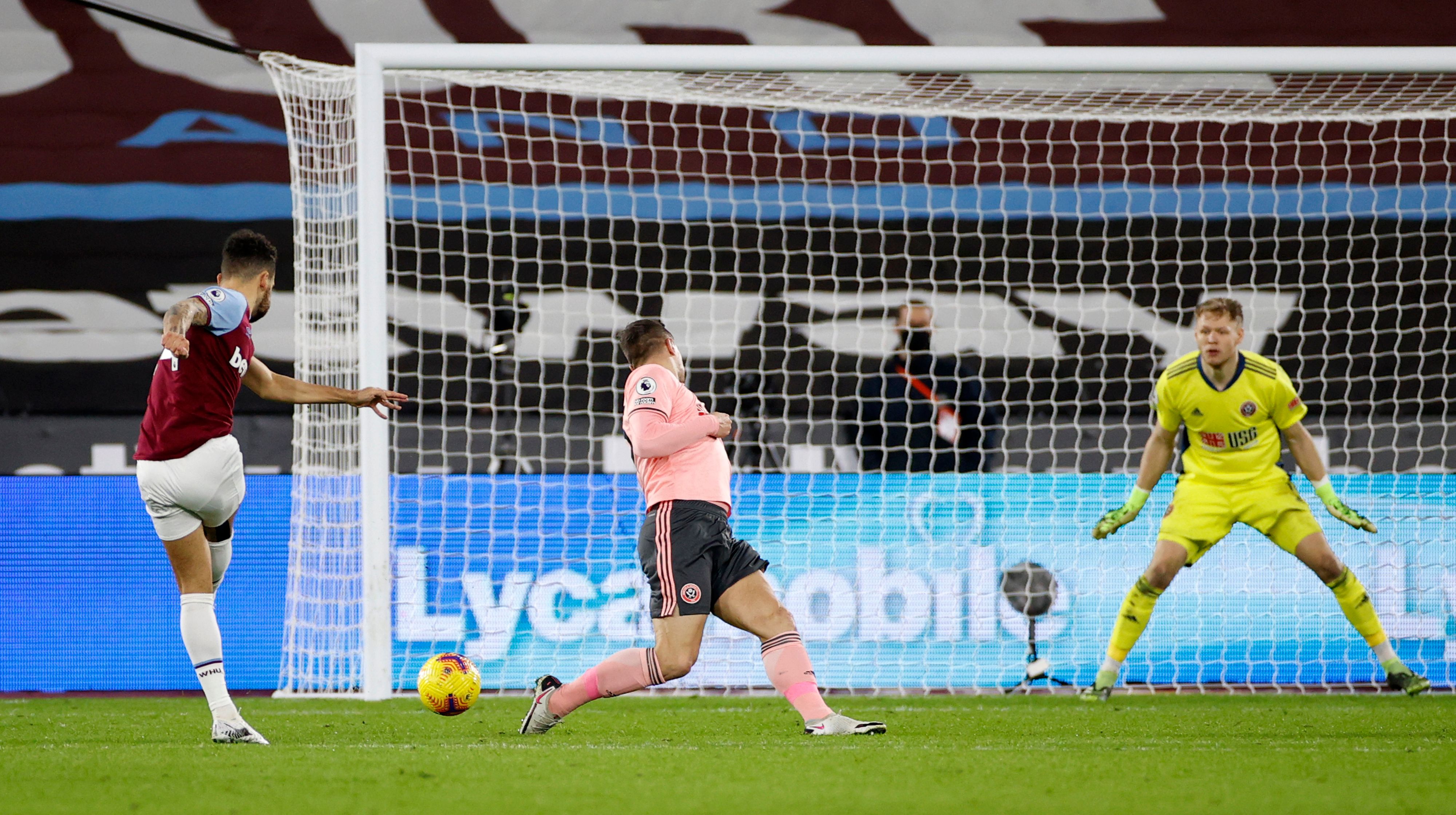