Melbourne’s West Gate Tunnel project has until now been plagued by toxic soil, commercial disputes, lengthy delays and a $4.5 billion cost blowout. Now it faces another, albeit smaller, headache: a squabble over an advertising billboard that was knocked down to make way for the new road.

Advertising giant oOh!media is demanding $8.7 million for the loss of its billboard in Spotswood, in a dispute that has landed in the Victorian Supreme Court. 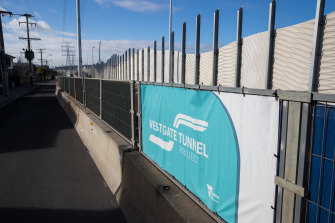 The Department of Transport initially offered only $120,000 when it compulsorily acquired the land in 2018 to start building the tunnel, which will run under the Maribyrnong River and link the West Gate Freeway with CityLink at Docklands.

But the advertising firm’s lawyers at Arnold Bloch Leibler have claimed it was entitled to compensation for the “destruction” of its business at the site including 20 years of foregone profits from the mammoth display signs.

The department budged slightly in November last year, increasing its offer to $250,000 to pay for a new sign to be built in another location along the West Gate freeway.

The advertising company rejected this offer too. The ASX-listed group said it was open to accepting a new sign as part of its compensation, but the department’s proposed location was hard to see from the highway which meant “advertising would be severely compromised and commercially unviable”.

In any case, it appeared a mobile phone tower had already been built in that location, the court documents say.

The Department of Transport sent the dispute to the Supreme Court on May 24 to settle under the Land Aquisition and Compensation Act. Both the department and oOh! declined to comment while the matter was before the court.

The money on the line is relatively tiny compared to the project’s almost $4.5 billion blowout in costs after the discovery of toxic soil at the site in 2019 caused construction to grind to a halt for almost a year and a half.

The project was originally to cost $5.5 billion and open to cars by 2023. But the final cost will be closer to $10 billion and is now set to finish about 2025 after tunnelling finally commenced earlier this year.

Victoria was locked in negotiations with toll road giant Transurban – which proposed the road – and builders John Holland and CPB Contractors over how to handle around 3 million tonnes of soil contaminated with potential carcinogens known as PFAS. The state eventually agreed to pay almost $2 billion of the cost overrun.

The Victorian ombudsman this week criticised the state’s Environment Protection Authority over how it dumped potentially contaminated soil from the project in the western suburbs, finding it ignored the rights of local residents and bowed to government pressure to fix a political problem.