"An Australia without rugby league is not Australia," Peter V’landys, the chairman of the Australian Rugby League Commission, declared. With every passing day, the prospect increases of this not-Australia becoming total. Not-Australia already extends to cricket, professional and club rugby, motor racing, broadcast international competitions, numerous community and school sports, and all sporting events attended by more than 500 people. 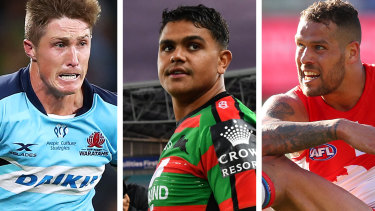 Alex Newsome of the Waratahs, Latrell Mitchell of Souths, and Lance Franklin from the Swans.Credit:Agencies

Sports have fallen off a precipice into an off-season without the off-season trip; a Christmas break without Christmas parties (or church); a long bye that, for some codes, threatens to become a long bye-bye. Should the coronavirus hiatus be the Armageddon that some fear, this new not-Australia is set to become the new Australia.

To assess what this not-Australia of no sport might look like, we must first acknowledge that for millions of Australians who have no interest in sport, this is the old normal: weeks that do not build to a crescendo of anticipation before release in grand Sunday spectacle, weekends free from team loyalties and high anxieties, newspapers where the back pages have always been a substitute loo paper. Spectator sports, on the scale we know them, are new to human history. Humans survive, and have survived, forever without this particular fix of bread and circuses, so, while Mr V’landys’ declaration was no doubt genuinely felt, and a genuine plea to the national political interest and the monetary support that might dislodge, let’s not get into too much of a twist about cancelled games.

They are, after all, games.

Yet, as Mr V’landys’ chief executive officer, Todd Greenberg, repeated on Monday, these professional games are also industries, and their suffering will be like those felt in other affected industries. Sport is an extreme microcosm of the gig economy. Professional players face cuts to their income if they do not play. The sports industry has a vast back office behind the front window. The ticket sellers, the security guards, the hot dog merchants, the match officials, the parking attendants, the hospitality staff, the program sellers, the equipment providers, the physios, the advertising salespeople, the ground announcers, the half-time entertainers – most of these are gig economy people working job by job, paid as and when others play. When games do not take place, there are downstream consequences causing far more anxiety than that facing full-time employees of clubs, far more real than the worries over whether your team won or lost.

The vacuum created by non-sport in not-Australia goes to social conversation and its lubricant, the sports media. In an alternative world, sports watchers would today be arguing about what some player said about gay people, what abuse some spectators ladled out to a player of colour, what official was about to get the sack, what betting company had compromised what code, whose hamstring made them a doubtful starter, and which referee or umpire stuffed up.

Now, in the absence of all play, the mill has no grist. The media engine has no fuel. What will we talk about for the next weeks and months? If you thought you were sick of the coronavirus now, how sick of it will you be when it is literally the only story in sports? The ceaseless gossip and trivia that usually fill the sports pages, news bulletins and websites seem, now that they have been lost, like a treasure.

Sports are, like some art forms, uniquely susceptible to isolation because they are physical pursuits. Footballers can’t work from home. There is no online alternative. The National Rugby League and the Australian Football League have stated that they will try to continue as purely television content, but it will be a virtual content with limited and quickly declining value. Even if they achieve their unlikely aim of continuing their seasons in stadiums without spectators, the show they are putting on will have the quality of practice fixtures, not the real thing, not-Australian football.

There are upsides to the not-Australia of no-sport. The roads on weekends will be easier to get around. People might start examining their world more thoughtfully without the escapism of their favourite opiate. They might shake the addiction once they realise that their weekend sport wasn’t a necessity of life in Australia, it was just a mindless habit that they took too seriously. They might read more books and listen to more music. They’ll certainly watch more movies and TV shows. If they really insist on sport, they might watch more re-runs of classic matches and gain a new appreciation of the past. It might be a version of not-Australia, but it’s not the end of the world. They got through two world wars without any high-level sport, and nobody died from that.

And when it starts again, they will see it with new eyes.

Tags: A, of, precipice, the, to, Welcome
You may also like
Celebrities News