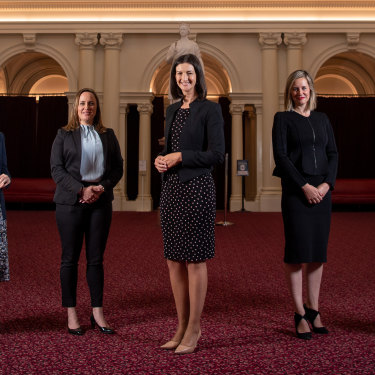 Ali Cupper, Bridget Vallence, Ellen Sandell, Steph Ryan and Gabrielle Williams in the Queen’s Hall at Parliament, surrounded by portraits of Victoria’s premiers, all but one of whom were male. Credit:Eddie Jim

Ask every female politician in the Victorian Parliament and they will most likely have that one story. There’s the young mother who was reprimanded for wearing black skinny jeans in the Legislative Assembly (“it was one less thing I needed to iron”); the 30-something who was consistently shouted over by male politicians each time she spoke; and the minister who was asked if she was at a local event to serve the guests tea.

These are not the experiences of MPs in a bygone era. These are the stories of female MPs forging a career over the past six years in what remains a male-dominated State Parliament. There are 88 politicians in the lower house, where governments are formed, and 34 are women – less than 40 per cent.

Victoria, like many parts of the world, has experienced a seismic shift in public discussions around gender inequality in recent years. The Andrews government’s Royal Commission into Family Violence in 2016 catapulted into the mainstream the tragic consequences of gender inequality, and the global #metoo movement highlighted its prevalence. 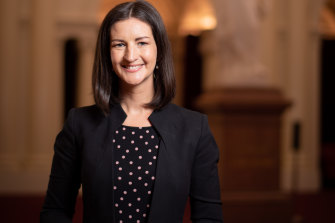 “I understand why younger women might want to stay away from politics but someone has to be the first to do it, and it will get easier for every subsequent person,” Greens deputy leader Ellen Sandell says.

“Our parliaments are supposed to reflect the communities they represent … and we can’t just leave parliaments to the older, established men from very similar backgrounds. We need people from all different backgrounds to make decisions that affect the entire community.”

Much has been said, and written, over the years about the experiences of women in politics and leadership positions. And with each discussion, each article, each speech, each interview, Sandell, cabinet minister Gabrielle Williams, Nationals deputy leader Steph Ryan, Liberal frontbench MP Bridget Vallence and independent MP Ali Cupper – politicians in their 30s and 40s holding senior positions – hope other young women start feeling more emboldened to put their own hands up.

If history is anything to go by, girls and women don’t feel confident about politics. A 2017 survey found young women in Australia are reluctant to pursue a career in politics because they worry about being treated unfairly. Two per cent of girls aged 10 to 14 listed politics as a career option, while zero per cent of women aged 18 to 25 said they would consider entering politics.

“It would be nice to see women in positions of power who didn’t have to look good at the same time,” a 10-year-old girl told the researchers. 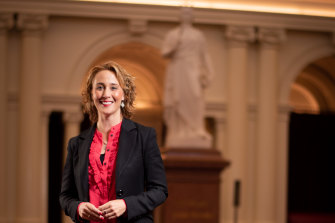 Gabrielle Williams says work to address gender inequality has not stopped after the Royal Commission into Family Violence. Credit:Eddie Jim

Parliament has become a friendlier place for young women starting families. Sandell became the first woman to breastfeed her baby in the Legislative Assembly since Labor MP Kirstie Marshall, who in 2003 was kicked out of the chamber while breastfeeding her newborn daughter because “only MPs and certain parliamentary staff are allowed in the House during sitting times”.

It’s still not perfect, the MPs admit, and there is a long way to go in truly making Parliament a workplace that supports young families.

The pathway to Parliament for the five lower house MPs across the political divide was diverse: Sandell was a scientist and community activist; Williams, a law graduate who worked as a political adviser; Ryan, a rural journalist and former staffer in the Baillieu government; Vallence, a businesswoman; and Cupper a social worker and councillor.

“More women in our government made our government better,” Williams says. “If you look at policy issues and some of the boldest reforms, they were championed by women in cabinet: voluntary assisted dying, medicinal cannabis, the biggest infrastructure agenda in the state’s history, record investment in police – that’s all largely been spearheaded by women and not just in stereotypical settings.

“So many issues that had been hanging around our communities and governments for generations … women dragged them out from under the carpet, dusted them off and dealt with them with incredible conviction and incredible compassion.”

Steph Ryan was 28 when she was elected to Parliament in 2014 and put her hand up for the deputy leadership position. The Euroa MP distinctly remembers hearing an interview with Gail Kelly on the midday news when she announced she was stepping down as Westpac chief executive to retire. 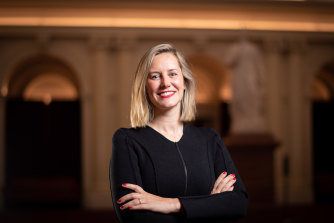 “She was asked, ‘what advice would you give young women aspiring to leadership positions?’ and she said, ‘just go for it, don’t wait, back yourself,’ and that played in the back of my head when I put my hand up for the deputy leadership. I thought I could sit and wait or I could trust that I have the ability to do this job and do it well, and my colleagues backed me,” Ryan says.

“The fact that my colleagues were willing to elect a 28-year-old woman as their deputy leader is testament that many of those [gender] stereotypes have dissipated. That’s not to say individual people don’t face it on occasion, but I don’t think it’s the norm within the Victorian Parliament.”

Sandell, Williams, Vallence and Ryan say they felt supported by their respective political parties during what is usually a bitter preselection process, and after being elected to Parliament. (Cupper was elected as an independent MP and has joined the Reason Party.)

In recent years, every major political party has found themselves in hot water over their members’ treatment of women. Former prime minister Malcolm Turnbull in 2019 said the Liberal Party had a “women problem”; the Victorian Greens’ candidate for the seat of Footscray at the last state election was forced to apologise for rapping about date rape and using degrading terms about women; while Labor sacked Adem Somyurek last year over his misogynistic tirade against Williams.

There need to be better systems to support more women entering Parliament and attaining leadership positions, the MPs concede, but they all point to vast improvements.

Vallence, the Liberal member for Evelyn, said she had not faced “gendered obstacles” when she decided she finally wanted to join Parliament and fight for her community. The preselection battle, she says, was an even race: three men and three women trying to convince local branch members they were the best candidate. 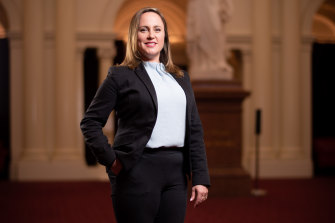 Bridget Vallence says she felt entirely supported by the Liberal Party during preselection and following her election to Parliament. Credit:Eddie Jim

“I think we need more women in our party, and in fact the whole Parliament does … but my gender was certainly not something I saw as a barrier or impediment or even a topic of discussion in my preselection,” Vallence says.

“I have a business background, strong set of commercial credentials, mum of two kids, a lot of experience — those experiences of being a mum and having worked in the private sector were the issues I presented to the Liberal Party when I sought preselection, that’s what I think people were interested in.”

However, Cupper’s experience before and during election campaigns was vastly different. She ran as a Labor candidate for the rural seat of Mildura in the 2010 election, when she came third, and recalls a local person telling her that her “main liabilities” were she did not have children, wasn’t married and did not run a business.

A Labor elder, she says, told her it was a “shame she wasn’t a bloke” because the electorate did not want a female MP. Cupper ran as an independent in the 2014 and 2018 elections, and not only knocked off a long-term sitting Nationals MP, but became Mildura’s first female parliamentarian.

“I was a person who did not fit any of the criteria of what had always been the criteria for a local MP,” Cupper says. 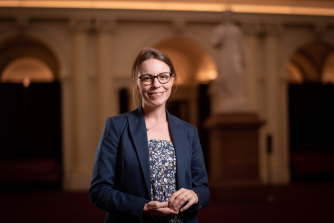 “I was female, I was young, I was a unionist, I was a feminist, I was an ex-Labor candidate, I was vegan, I was a prominent voice on a whole lot of social issues, and the electorate chose me — by a little bit, it wasn’t a landslide, but they still chose me as their preferred candidate.

“What has happened in the two years since has been quite an exhilarating journey for my team and community, that we can treat politics as a strategic undertaking, we can be tactical and get not just what we deserve but what our kids deserve.”

The 41-year-old brushed it off when an MP wanted Parliament’s rules changed to prevent people from wearing jeans; Sandell felt confronted by two male MPs who shouted each time she spoke, a treatment her male Greens colleagues didn’t face; and Williams learnt to put up with men at local events assuming she was there to serve the tea or was the minister’s secretary.

People still make judgments, whether consciously or subconsciously, about where women sit in the hierarchy, Williams says. And although social attitudes are slowly shifting, some people still assume a woman must be in a subordinate position.

“Every election campaign I’ll be asked if I have children: If I say no, I’m a cold-hearted career woman, and if I say yes, I’m a terrible mother … and then there’s the focus on how we dress, how we look, all of those things,” she says.

“As a society, we’re still not entirely used to seeing women in positions of leadership, authority, power, and because that is still not as commonplace as it should be it sometimes attracts commentary, which is unduly gendered, overly harsh, and sets expectations for women that are quite frankly over and above any expectations that we set for men.”

Tags: Can’t, leave, parliaments, to, We
You may also like
Celebrities News