Tyler Cameron and Hannah Brown definitely have the whole TikTok thing down.

On Thursday, the Bachelorette alums put their spin on the “Flip The Switch” challenge while also poking fun at the romance rumors they’ve sparked in recent days.

Together with members of their “Quarantine Crew,” Hannah and her two pals kicked off the video. Showing off her sun-kissed skin, the Dancing With the Stars champion danced in front of a mirror while donning a black crop top and white leggings as Drake‘s song “Nonstop” played. Then, when it came time for the “switch,” Tyler, his brother Ryan Cameron and another friend emerged and switched outfits with the girls. Naturally, the Florida native sported the former Bachelorette‘s ensemble.

Using Hannah and Tyler’s romantic history as inspiration for the perfect caption, the group wrote, “BREAKING: Tyler finally got into Hannah’s pants.”

Since touching down in Palm Beach, Fla. over the weekend, Hannah and Tyler have been enjoying their time in the Sunshine State together.

Earlier in the day, the group of besties gathered outside to break a sweat together during an Instagram Live on Hannah’s account. Led by one of their pals, Hannah and three members of the crew engaged their core with some ab workouts.

Seeing that the crew was feeling the burn, Tyler stepped up as water boy and made sure his pals were hydrated before joining them for the next move. When it came time for some cardio with a few air punches, Tyler seized the moment to let out some tension. Pretending to hit Hannah, he joked, “Remember that time you didn’t give me a rose?” 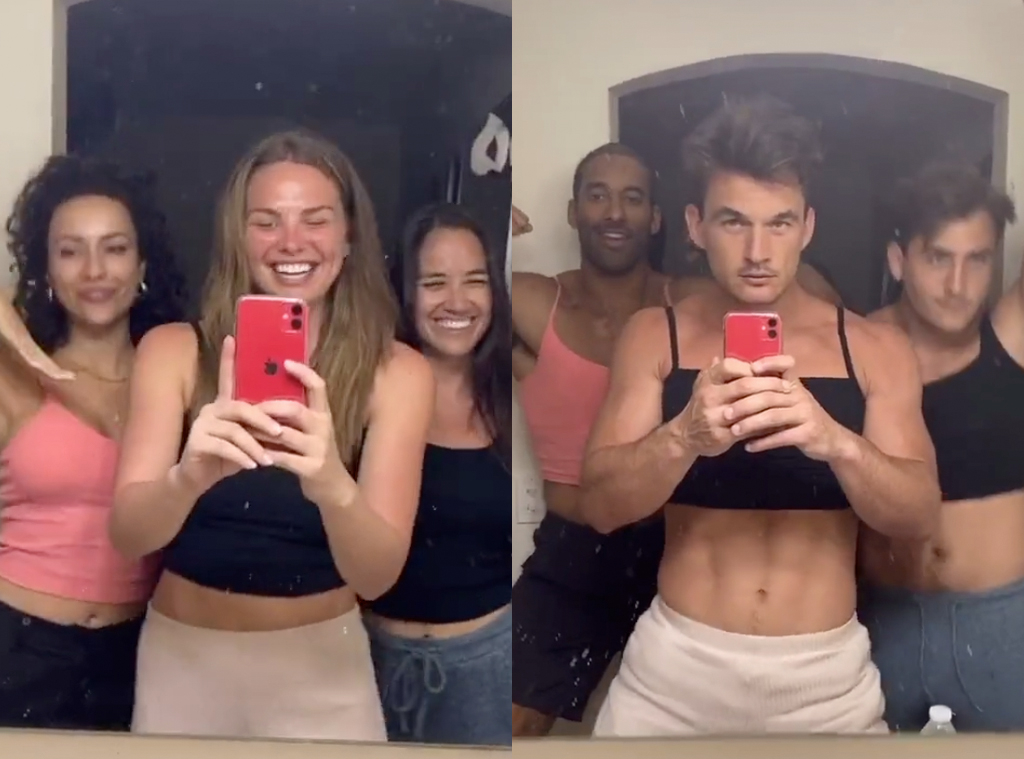 Despite the spontaneous nature of Hannah’s visit, a source close to Bachelor Nation star assured E! News that she and Tyler aren’t an item at this time.

“There is definite chemistry between Hannah and Tyler, but they are not dating,” the insider shared with E! News. “They both have expressed they are not in a position to date right now but do care about each other. They have both been through a lot recently and are supporting each other through it.”

After his mother Andrea Cameron passed away earlier this month, the source noted that Hannah has been helping Tyler get through the tragic loss. “Tyler has definitely been leaning on Hannah and it feels very comforting to have her around,” the source added. “Hannah gets along with Tyler’s family and friends and everyone loves her.”

Tags: b, hannah-brown, Tyler Cameron
You may also like
Celebrities News