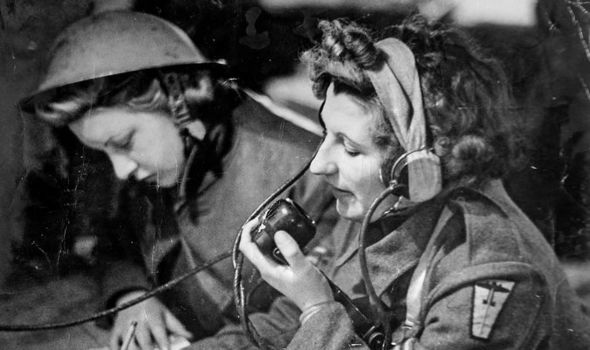 It was February 1945, the tide of war had turned dramatically against the Nazis and the war in Europe would be over in three months, but Molly feared she might not live to see the end of hostilities. “I thought they were not going to be able to dig me out and that I was gone,” she recalls today. “I remember waking up and not knowing where I was. You try to make yourself heard but you can’t because nobody knows you are there. They didn’t get everybody out.”

Molly was one of the lucky ones. She was dug out and rushed to hospital where she spent ten days recovering from her ­injuries after having shrapnel removed from her shoulder.

Her incredible story of survival is being told for the first time after the Women’s Royal Army Corps Association (WRAC) and the Daily Express teamed up to find Britain’s oldest surviving British female war veteran.

The previous holder of the accolade, former PT instructor Anne Robson, died aged 108 in Edinburgh in January. Now aged 102, Molly, who lives in a care home in West Molesey, near Hampton Court in Surrey, is believed to be the oldest female veteran.

Molly signed up to do her bit for the nation on April 23, 1941, joining the Royal Artillery. She operated and oversaw the height-finding apparatus, an optical rangefinder used to ­determine the altitude of an aircraft using a mechanical computer to direct anti-aircraft guns.

Women were not allowed to fire the guns, but scanning the skies above ground during air raids, with bombs going off all around, was full of danger. 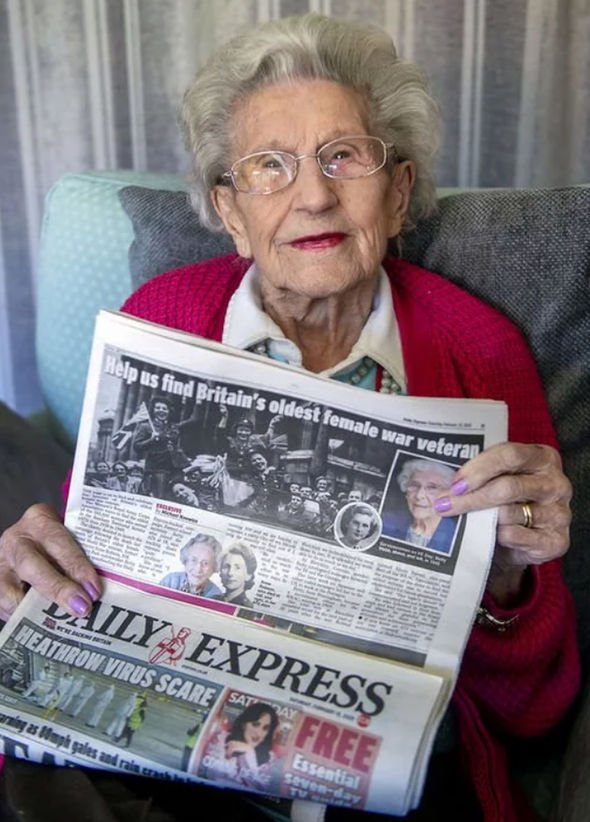 Molly recalled her deployment to the 435th Heavy Artillery Battery in Richmond Park, west London, in 1941: “I would see a plane coming and say, ‘Standby… standby… standby… fire!’ when I could see that they could reach us.

“We had eight guns scattered about the park and I was in charge of all of them. The men were on the guns and the women gave me the readings to call out to the command post.

“I wore a microphone to carry my voice to them. They couldn’t fire until I gave the command post the order, giving them the ‘quadrant elevation’ from the equipment.” Richmond Park, best known nowadays as a safe haven for deer, served as an anti- ­aircraft base to protect Londoners from German attacks. It also became the site for the first mixed-sex battery following a drop in manpower at the end of the Blitz.

Molly, who remains feisty and full of vigour, shivers as she recalls the roar of the guns and the terror of falling bombs, flying shrapnel and the ever-present risk of not seeing the next dawn.

“I was frightened to death,” she admits. “There were bombs coming down and you were trying to hide behind haystacks as well as do your job. I had to sleep in a steel helmet. In fact, I went to bed fully dressed with a gas mask around my neck.”

She had joined up in May 1941 after passing entry exams. But arriving at her depot, recruits found none of the prefabricated Nissen huts they were to live in had been assembled. So they slept in the surrounding fields until they could be built.

She recalls an early visit from Prime Minister Winston Churchill.

“He was charming, a bit cheeky,” Molly laughs.

She knew his daughter Mary ­better, having served with her.

“I was not in charge of her particularly,” Molly says, although they were friends and would meet at reunions in later years. “She was pleasant and could be a bit niggly… but couldn’t we all?”

After just 18 months, her leadership skills saw her promoted to Company Sergeant Major, becaming the first female CSM to have men and women serving under her. The promotion put her in charge of hundreds of people. But did she enjoy having men under her command?

“If they did as they were told,” she smiles. Does that mean she was also a strict boss? “I was, very,” she replies.

War records show Molly was, in fact, revered by her colleagues. One testimonial stated: “CSM Francis is absolutely trustworthy and reliable and is popular with the auxiliaries under her.” 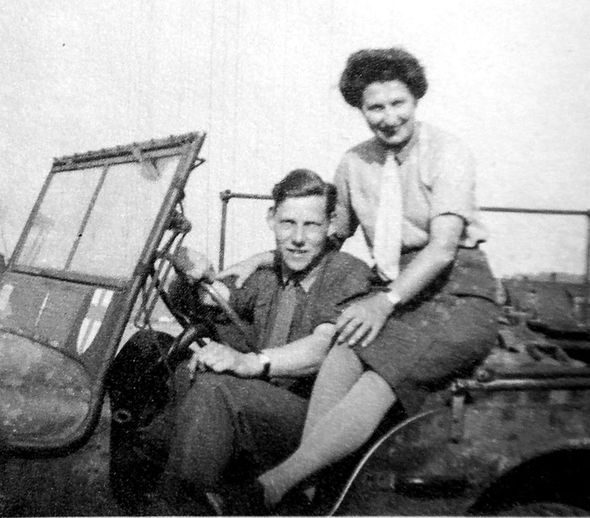 Like many of the women whose talents came to the fore during the war years, Molly found she was a natural leader. She had been born Gladys Eva Inman under a bench in Pearson Park, Hull on February 4, 1918, after her mother unexpectedly went into labour. She did not know her father, a military man whose surname she took, while she saw her nurse mother only occasionally and was mostly raised by grandparents.

Despite her unorthodox start, Molly – the nickname by which she is known to all –remembers a carefree childhood. She learnt ballet and tap dancing, played the piano and enjoyed ­visits from school friends to her big back garden.

“Because I was born under a bench in the park, they always used to pull my legs, saying I was born in a wheelbarrow,” she recalled.

After school, she joined Woolworths aged 15, enjoying her first taste of responsibility after being made a supervisor.

Interestingly, it was not the outbreak of war that prompted Molly to take her Army medical exams, aged 22, but an act of love. “I’d found a boyfriend, Cliff, and he’d gone out to India and I wanted him back again,” she explains. “But he didn’t come home until after I was married and that’s just how it was.”

The war was a time of heightened emotions when fear could ­triumph in an instant.

“A few people naturally didn’t want to leave home so we had a few crying fits in bed but you didn’t get out of the Army doing that, you just got on with it,” Molly says. 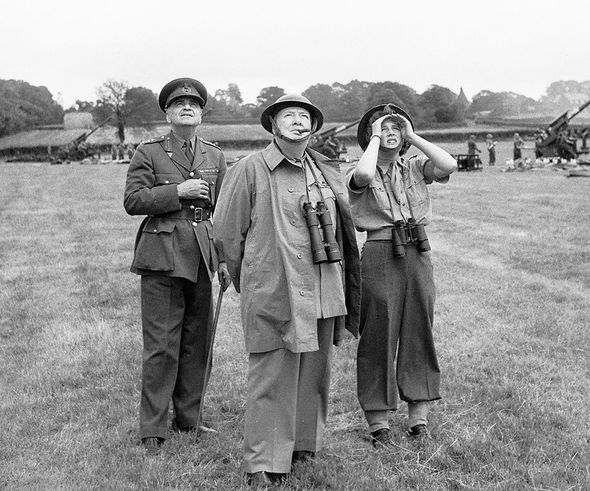 She remembers moments of pride such as organising tconcerts and taking charge of the parades in Hyde Park. “My battery used to say I had a voice like a foghorn but when you’ve got hundreds of girls and boys, your voice has got to carry so they all understand what you’ve said,” she says.

Later, in July 1944, her artillery battery was sent to Hastings on the south coast to try and intercept V1 flying bombs.

The so-called Nazi ‘Vengeance’ weapons were supposed to cause mass casualties and undermine British morale following the sucessful D-Day invasion in Normandy a month earlier.

But they could be shot down by artillery or aircraft as they sped across the sky.

“We moved the gun site onto the coast to fire over the water before they got to the town,” Molly says.

Hastings proved to be a happy posting. She met Bernard Francis, her future husband, an Army captain. The pair were married for 67 years before Bernard died in 2012.

Following Molly’s posting abroad to Brussels to follow Bernard, where she survived the bomb attack, she was discharged from the Army and the couple married soon after the war’s end on July 29, 1945. Molly was the first British woman to get married in occupied Germany, the wedding paid for by the Army as a morale booster. 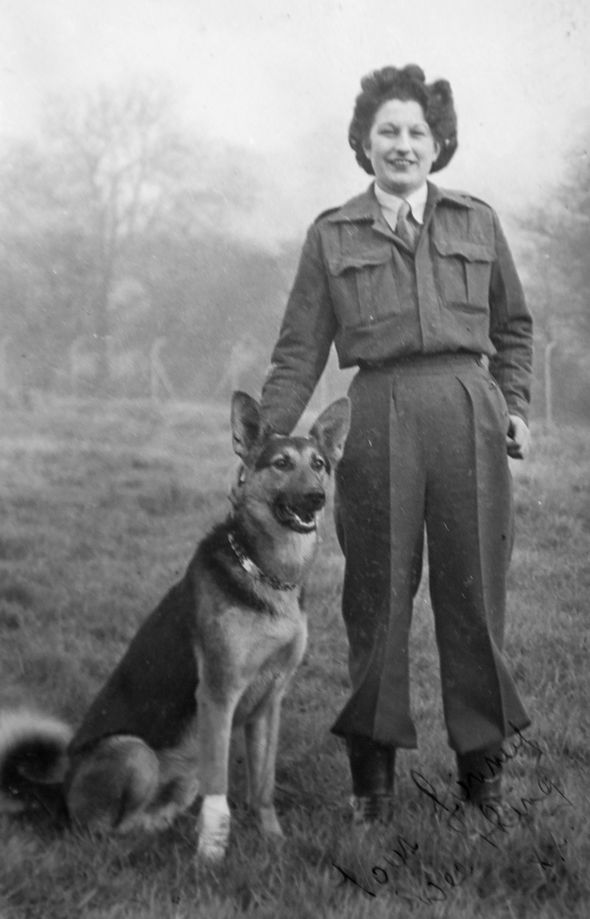 She remembers a German boy trying to offer her a bouquet of wildflowers as she left the bombed-out church. Her flimsy borrowed dress was lined by a bed sheet to hide her sturdy Army knickers.

A year after the war’s end, Molly had her eldest daughter Sue, ­followed by a son, Paul, in 1948.

Bernard went to India for a period but the family later settled in Molesey, Surrey. After the war, Molly had several jobs, including working as a fashion buyer for Keddies, a small chain of department stores, in the 1970s.

And, despite her obvious ­heroism, Molly has some regrets about her wartime service.

“At times I felt so guilty after the war,” she admits. “It’s not good to know you shot somebody. It’s either him or you so you just shoot him. But it’s not a nice feeling at all to know I’ve killed people.”

She regards herself as a giver, rather than a taker and hopes to pass on to future generations the life lesson: “Be honest and true, and always do the right thing.”

Tags: headlines, Nation, UploadExpress
You may also like
Celebrities News