Gambling companies would be banned from sponsoring professional sport in a proposal backed by 62 per cent of voters at a time when football, netball and cricket stars are using their influence to veto sponsors.

But only 27 per cent of Australians want to ban coal, oil and gas companies from sports sponsorship despite the stance taken against fossil fuels by stars like Test captain Pat Cummins and Fremantle legend Dale Kickett. 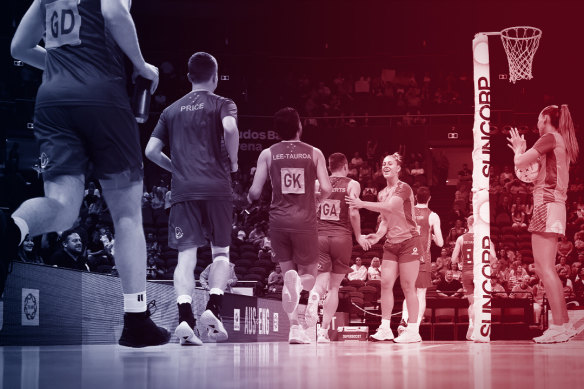 Netball, football and cricket stars are using their influence to veto sponsors.Credit:Getty

Support is stronger for a ban on alcohol companies sponsoring professional sport, with 38 per cent backing a ban while 45 per cent think the beer and spirit producers should be allowed as sponsors.

The exclusive findings highlight the growing debate over the money pouring into major sport from sectors fiercely opposed by critics, who say the result “normalises” industries that harm the environment or the community.

The survey, conducted for this masthead by Resolve Strategic, reveals that only 25 per cent of voters believe gambling and betting companies should be allowed to sponsor sport, while 62 per cent prefer a ban and 14 per cent are undecided.

On fossil fuel companies, however, 51 per cent believe sponsorship should be allowed from coal, oil and gas companies, while 27 per cent prefer a ban and another 22 per cent are undecided.

The Resolve Political Monitor surveyed 1611 eligible voters from Wednesday to Sunday to explore community views after a series of controversies over sport sponsorship, including calls from Kickett and fans of the Fremantle Dockers to dump gas producer Woodside as a major sponsor of the team.

“More so than ever before, you’re seeing players’ personalities and interests and passions shine through and have a bit more of a say than maybe in the past,” Cummins said last month.

The friction over sponsorship also prompted mining billionaire Gina Rinehart to withdraw a $15 million deal from Netball Australia after Queensland Firebirds shooter Donnell Wallam raised objections because Rinehart’s father, Lang Hancock, said in 1984 that some Indigenous people should “breed themselves out” by assimilating or being sterilised.

Victorian Premier Daniel Andrews stepped in with a $15 million state government sponsorship for Netball Australia this week. The state opposition said it would honour the deal if it won power at the November 26 state election.

The Australasian Gaming Council estimated that total gambling expenditure in Australia was $25 billion in 2018-19, including $961 million in sports betting, but it did not respond to questions before deadline. It estimated the industry paid $6.6 billion in state and federal tax in that year.

The chief advocate for the Alliance for Gambling Reform, Tim Costello, said sponsoring sport enabled gambling companies to appeal to children, build their customer base and steadily gain more influence over sporting competitions to be point where they would “own” the codes.

“The damage is that children’s minds are captured and they are being gingered up to be gamblers, and many of them will become problem gamblers,” he said.

“Really, it is a grooming exercise by these sports betting companies and we know that in places it has already corrupted sport, and as it continues to become more dominant, it will corrupt sport even more.”

The new survey, which has a margin of error of 2.4 percentage points for national results, sought views on sponsorship by industries ranging from fast food to major supermarkets and found support for sponsorship was lowest for gambling and betting companies.

Asked about supermarkets, 83 per cent were in favour of their sponsorship of sport and only 5 per cent were against, with the rest undecided.

Fast-food chains triggered greater concerns but still had clear majority support for their sponsorship, with 60 per cent in favour, 24 per cent against and 16 per cent undecided.

The question was: “There has recently been some debate about what sort of companies and industries should be allowed to sponsor professional sporting teams, which usually involves their clothing having a logo that can be seen during games. For each of the following industries, please tell us whether you think they should be allowed to sponsor teams or banned from doing so.“