Federal Education Minister Alan Tudge says the large-scale return of international students to Australian campuses may depend on the availability of an effective vaccine.

In his first public comments since being appointed to the education portfolio, Mr Tudge said there was no clear timeline for when international students could return in significant numbers, but the prospect of a successful vaccine provided an avenue of hope. 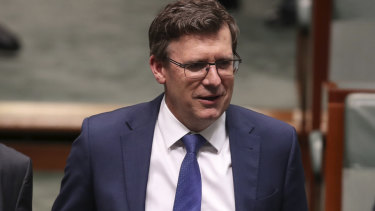 Education Minister Alan Tudge says a viable and effective vaccine is key to the return of international students in large numbers.Credit:Alex Ellinghausen

“Ordinarily, we have about 185,000 students who would cross the borders and come into Australia to start at the beginning of the academic year, and about the same number again in the middle of the year. Now, when we can get back to those types of numbers, I don’t know yet,” Mr Tudge told ABC radio.

“We’re really taking it week by week and month by month. Obviously, a big factor in all of this is the vaccine and how effective that will be. And should that vaccine be effective, then it really does make a big difference and we may be able to take numbers in again.”

In earlier comments to The Australian, Mr Tudge said it was “going to be very difficult” to get significant numbers of international students back onshore this year.

“Our priority is ensuring that Australians can get home and Australians are kept safe from the virus.”

Mr Tudge, who was appointed to the education portfolio in December following a cabinet reshuffle said the government was open to looking at “all options” for quarantining international students, including on-campus arrangements, in order to bring them safely into the country.

The federal government last year requested each state and territory submit international student arrival plans by November, demonstrating how either hotel or industry-led models of quarantine could be used to enable the return of international students. The plans must be signed off by the states’ respective chief health officers.

Mr Tudge said the government was still yet to receive detailed proposals from any state or territory.

“The state governments are working through those things, along with the higher education providers, but we’re still not at that stage yet where we’re in the position to be able to have significant quarantining arrangements for those international students,” he told the ABC.

“Those proposals need to be above and beyond what their existing quarantining arrangements are, which are available for Australians who are returning.”

Tags: for, hope, inte, provides, vaccine
You may also like
Celebrities News