Britain’s broadband network ‘won’t cope’ with millions of people self-isolating and working from home during the coronavirus crisis, experts warn

Britain’s broadband infrastructure will not be able to cope as millions of people work from home during the coronavirus crisis, experts have warned.

Many companies have implemented a mandatory work from home policy as a precaution against coronavirus but widespread adoption could lead to internet connectivity issues, experts warn.

The added strain of remote access, video conferencing and the use of VPNs may cause some difficulties for the country’s broadband infrastructure.

The government has predicted that up to a fifth of the UK’s workforce could be sick at one point during the coronavirus peak.

A similar number of people are also expected to stay at home even if they are not infected to avoid catching the disease.

Home broadband, much of which is still reliant on an antiquated copper-wire network, is not set up to cope with the demands of mass internet trading and video conference calls, according to experts.

Technology firms that have high data demands, such as Twitter, Google, Facebook and Microsoft, are also among the companies banning staff from its offices. 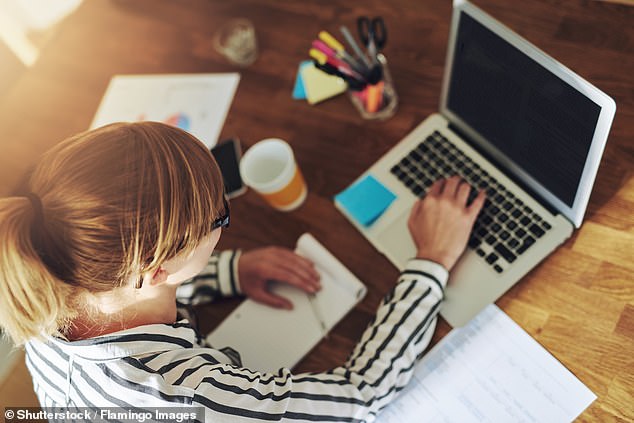 The added strain of remote access, video conferencing and the use of VPNs could cause some difficulties for the internet’s infrastructure. Domestic broadband for customers served by the antiquated copper-wire network would be first affected and could see a data bottleneck (Stock)

Professor Izzat Darwazeh, Chair of Communications Engineering at University College London,  told the Daily Telegraph: ‘I doubt that the core network can cope if even tens of thousands of people who work in the City of London are forced to work from home and need access to video conferencing and trading systems.’

He said there could be internet blackouts in rural areas because of under-investment in the ageing broadband networks.

In the UK, only three million homes and businesses – around 10 percent- have access to the latest full-fibre broadband, according to an Ofcom study released last year.

Lisa Pierce, a network expert with Gartner in the US, told Bloomberg Quint: ‘The weak link in the chain, where the system could get overloaded, is going to be the home broadband network.

‘People will hit congestion, just like a highway, where the speed goes from 60 miles an hour to 20.’

But the fears of Ms Pierce are not shared by Openreach, the UK’s biggest provider of broadband to homes.

The BT-owned telecoms company told MailOnline it is built to support a so-called ‘evening peak’ network capacity, which it defines as ten times the typical daytime (working hours) demand.

This spike in internet usage comes from the data-intensive video streaming of films, TV programmes and sports.

The company is confident it could handle home-working on a mass scale, as could happen should the COVID-19 virus worsen.

Customers with slow internet, served by the antiquated copper-wire network would be first affected.

The likelihood of the internet being completely overwhelmed is slim but some disruption is possible.

‘The moment you add in videoconferencing to all the shows the kids are watching because schools are closed, it could be a problem if everyone is trying to get on at the same time.’ 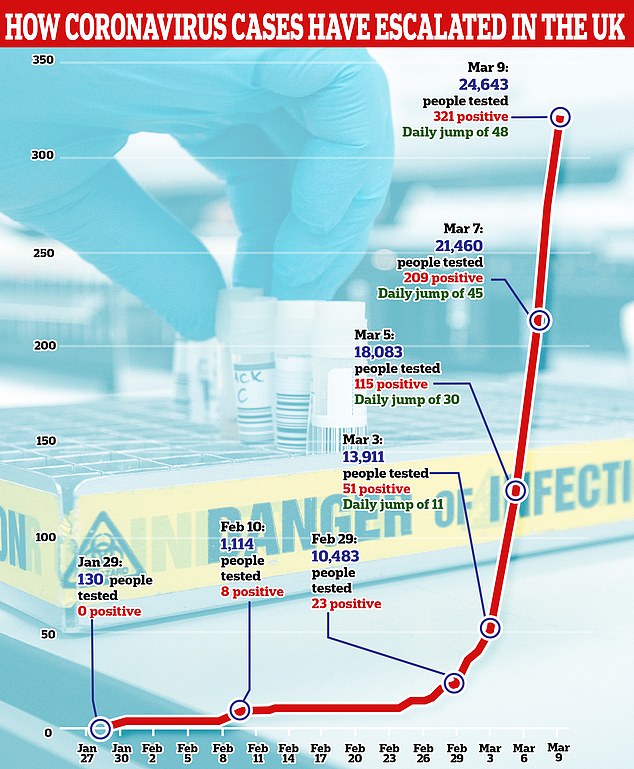 Working from home on a mass-scale is fraught with hazards as recent comments from Dr Asma Adnane from Loughborough University reveal it increases the likelihood of being hacked.

Being outside the office and without access to a secure local network means devices are provided with weak security settings.

Professor Alan Woodward, a cybersecurity specialist from the University of Surrey said that systems used by banks and other businesses could be at risk.

‘Using personal computers to access work networks could also raise cybersecurity issues for businesses if the devices aren’t kept up to date,’ he said.

HOW TO AVOID CATCHING CORONAVIRUS

Shoppers should pay using contactless cards to avoid catching the coronavirus from a dirty banknote, health experts have said.

A spokesman for the World Health Organization said contactless cards could ‘reduce the risk of transmission’.

Notes change hands hundreds or even thousands of times during circulation and can pick up all manner of dirt and bugs as they’re passed around.

Experts say the coronavirus could latch onto currency in the same way that it is able to live on hard surfaces like doorknobs, handrails and toilet handles.

So using contactless cards – which mean someone only has to touch their own card, which is never handled by anyone else – could protect them from it spreading.

The advice comes as employers have reportedly started to ban hot-desking, when people share desks; and, in France, ministers have told people to stop doing ‘la bise’, the traditional cheek-kiss greeting.

Tags: A, broadband, network, UK&apos;s
You may also like
Celebrities News