More than two-thirds of Australians believe all children aged 5-11 should be vaccinated against COVID-19, but support for the move dips among parents with children in that age group.

Overall, 83 per cent of parents with children in the 5-11 age group say they are likely to get their own kids jabbed once a vaccine is approved and available, which is expected early next year, polling conducted for The Sunday Age has found. 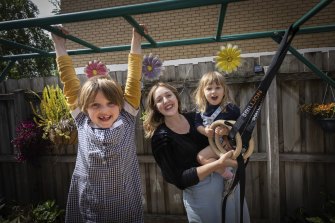 The percentage of people who believe all children should be vaccinated against COVID-19 is 69 per cent in the general population, but 57 per cent of parents of 5-11 year-olds think all kids in that age group should have the jab.

“Widely, there’s an impatience,” she says. “People can’t wait for it to happen.”

Her daughters Frida, 3, and Stevie, 7, have both been caught up as tier 1 contacts at daycare and school multiple times this year and although vaccination isn’t a guarantee of non-infection, Ms Marshall said it would take a big worry off her shoulders. As soon as health authorities give the tick of approval, she’ll be getting the girls vaccinated.

Canterbury father Greg Smart thinks many parents would feel similarly to him – he’s fully vaccinated and will most likely get his children Annie, 8, and Teddy, 9, vaccinated. But he wants to wait until at least March next year.

“I want to time it so they get through [next] winter with the maximum protection, that’s actually my goal,” he said.

“But also by the time you get to March, you’ll also have the benefit of plenty of people have had it – because I am a little hesitant, but not hugely.”

In a clear sign that the belatedly successful rollout of COVID-19 vaccines will continue, 91 per cent of Australians who have had two doses of the vaccine say they are likely to have a booster shot too, with just nine per cent saying they are unlikely to do so.

Vaccine hesitancy has crashed to just 5 per cent of Australians in the latest Resolve Political Monitor survey, conducted for The Sunday Age by Resolve Strategic, down from a high of 29 per cent of people when the question was first asked in May, 2021. 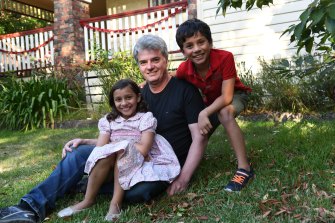 Greg Smart is fully vaccinated and will most likely get his children Annie, 8, and Teddy, 9, vaccinated. But he wants to wait until at least March next year to have the highest amount of protection for his children through next winter.

In Victoria, just four per cent of people said they were not likely to get the jab. In New South Wales, the figure was five per cent, but in Queensland and in other states it was slightly higher at seven per cent.

Resolve director Jim Reed said the findings suggested Australian parents are willing to get their kids vaccinated, but that they want control of when and how to do it.

“A majority of parents agree that kids should be included in the vaccination program, but before it’s rolled out, they want to know it is safe,” he said.

The Therapeutic Goods Administration is yet to approve either the Pfizer or Moderna vaccines for the 5-11 age group and is currently waiting on more data from the United States.

If the two vaccines are approved, the Australian Technical Advisory Group on Immunisation (ATAGI) will then advise government on the details of the rollout.

Lieutenant-General John Frewen told The Sunday Age earlier this month the rollout for 5-11-year-olds is likely to begin in mid-to-late January 2022.

University of Sydney infectious diseases paediatrician Robert Booy said the findings demonstrated parents wanted to protect their children as best they could.

He cautioned “we need high-quality data, information, reassurance, proper science to support the widespread use of the vaccine in healthy children, who are unlikely to get very ill from COVID”.

Professor Booy said about 3 million children in the US had been vaccinated since the rollout began and in about three more weeks, when many of these kids had had their second doses, quality data would be available to authorities in Australia.

“Right now America is undertaking a large social experiment, which will hopefully prove the safety of the vaccine in young children.”