Quarantine rules could be eased for essential workers in transport and aviation in the next phase of a federal plan to fix chronic staff shortages that have disrupted food supplies and intensified a political storm over the blame for soaring coronavirus infections.

Prime Minister Scott Morrison wants state and territory leaders to back plans to ease restrictions on more workers in essential jobs when they become close contacts of a confirmed COVID-19 case, as industry chiefs prepare for a meeting on Tuesday to make the case for shorter isolation periods. 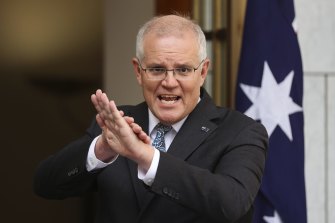 But the government is being accused of bungling the response to the surge in cases from the Omicron variant, with the peak shop workers’ union claiming “negligence and failure” by Mr Morrison because he did not ensure the supply of rapid antigen tests.

With pharmacies telling Australians they have run out of the rapid tests and supermarkets warning about food shortages, Labor leader Anthony Albanese intensified his claim that Mr Morrison was taking a “let it rip” approach to allow infections to surpass 500,000 active cases, the tally reached on Monday.

Mr Morrison denied wanting a “let it rip” outcome and outlined plans to tackle the supply chain problems with a national agreement to relax quarantine and isolation rules for workers who are essential to healthcare, food supply and transport.

“You have two choices here. You can push through or you can lock down. We’re for pushing through,” Mr Morrison said on Monday.

Mr Morrison acknowledged the Omicron case numbers were rising faster than forecast in government’s early estimates but emphasised the newer virus strain was less severe than other variants.

The Australian Health Protection Principal Committee of federal and state medical officers agreed on Sunday to new guidelines for staff in food and grocery supply to allow those who are close contacts to emerge from isolation sooner than workers in other sectors.

The advice was released online on Monday but only applies to essential parts of the food supply chain such as warehouses, excluding customer-facing staff at supermarkets and grocery stores and excluding restaurants or cafes.

The next phase in the federal plan is to adopt more flexible rules for workers in other essential sectors such as aviation and trucking, with Mr Morrison scheduling a meeting with industry chiefs on Wednesday to discuss the scale of their staff shortages.

The Wednesday meeting will also give executives in other industries an opportunity to seek the same flexibility for their workers, subject to their estimates about the impact on the economy and the supply of essential items from keeping thousands of workers in isolation under the existing rules for close contacts.

Federal officials said on Monday the government had ordered 78 million rapid antigen tests, with some of the kits already in the country, while states and territories supply another 190 million tests.

Australian Retailers Association chief Paul Zahra called for urgent action by governments to make it easier to keep staff at work, saying 20 per cent of retailers were closing some locations because of staff shortages.

Union leader Gerard Dwyer, the national secretary of the Shop, Distributive and Allied Employees’ Association, blame the federal government to being too slow to address the problem.

“This is, once again, the result of the Prime Minister’s congenital negligence and failure to plan or demonstrate genuine leadership, once more putting at risk not only the health and safety, but now welfare of the entire community,” he said.

Mr Albanese revived his attack on Mr Morrison for being too slow to respond to challenges, drawing a parallel with the Prime Minister’s claim early last year that the vaccine rollout was not a race.

“We’re now in the third year of this pandemic and Scott Morrison still thinks that it isn’t a race,” Mr Albanese said.

“He still thinks that you can have a distinction between health outcomes and economic outcomes.

“What we know is that if you don’t get the health outcomes right, the adverse impact on the economy will be stronger.

“We’re seeing that with workers unable to attend work, with businesses which are closing, or which are temporarily unable to open in the hours in which they want.”