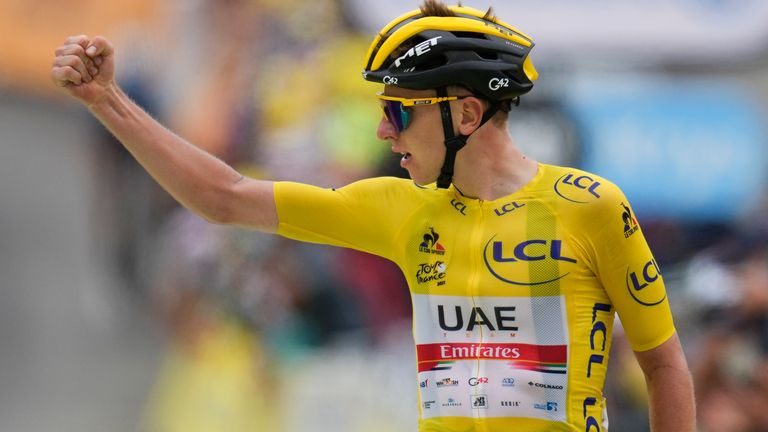 Tadej Pogacar celebrated stage victory in yellow for a second day in a row at the Tour de France and can surely soon start toasting a second consecutive title after another dominant display.

In a mirror image of Wednesday’s finale, Pogacar raced clear of Jonas Vingegaard and Richard Carapaz in the final few hundred metres of the climb to Luz Ardiden as the top three came home in the same order as their positions in the overall standings.

The victory moved Pogacar to the top of the king of the mountains classification, putting him in line to arrive into Paris as the owner of three of the four race jerseys – yellow, the polka dots, and the best young rider’s white – for a second year in a row.

It also made him only the fourth rider in Tour history to win on consecutive summit finishes.

The Jerseys and rankings following stage 18 up Luz-Ardiden. ⬇️

This Tour has claimed many victims, but even if Primoz Roglic or Geraint Thomas had avoided injury or incident, it is hard to imagine anyone being on the level Pogacar has demonstrated day after day.

“[Cycling] has been a game for me since I started,” the UAE Team Emirates rider said. “It’s one I’m really enjoying playing.”

Others will disagree. The Ineos Grenadiers bossed the Tour for most of the last decade as Team Sky, but with three days to go they have no victories in this race and no real hope of seeing Carapaz move up from third given Vingegaard’s superior time trialling ability.

Knowing this was their last chance, they had worked to set up Carapaz for an attack on the final climb but the Ecuadorian could not find a gap.

The three leaders were joined in the final few kilometres by Enric Mas, the Movistar rider hoping to build on Spain’s dominance of this climb since it was first used in the Tour in the 1980s.

He attacked with 800 metres to go, but Pogacar responded to ease away from Vingegaard and Carapaz for his third stage win of the Tour – one that increases his lead to five minutes and 45 seconds.

The 130km stage from Pau was the shortest road stage of this year’s Tour, but back-ended by the hors categorie climbs of the Tourmalet and Luz Ardiden, also one of the toughest.

The day began with news of a police raid on the team hotel of Bahrain Victorious overnight, with French prosecutors announcing a preliminary investigation into doping allegations was underway.

Matej Mohoric had said the team’s riders had nothing to hide and would respond on the road, and it was the Slovenian champion who got in an early break – tackling much of the Tourmalet alone with Julian Alaphilippe.

After they were caught by a larger chasing group, David Gaudu struck out for glory with some daredevil descending out of the clouds, but the Frenchman could not build much of a gap.

In the end, there would be nobody who could live with Pogacar – the young phenom who is competing in only his third Grand Tour – but who has collected three stage wins in each and is en route to winning a second overall.

Friday’s stage to Libourne is flat, an opportunity for Mark Cavendish to break Eddy Merckx’s record of 34 Tour stage wins outright, before Saturday’s time trial will bring the final changes to the overall standings.

But given Pogacar won the stage five time trial, the opportunities to dislodge him have already gone.

“Why should I be worried?” he said. “For the time trial, we will see. It is a discipline where I always want to do my best.

“You can lose six minutes in a time trial, it’s happened before, but I’m pretty confident.”