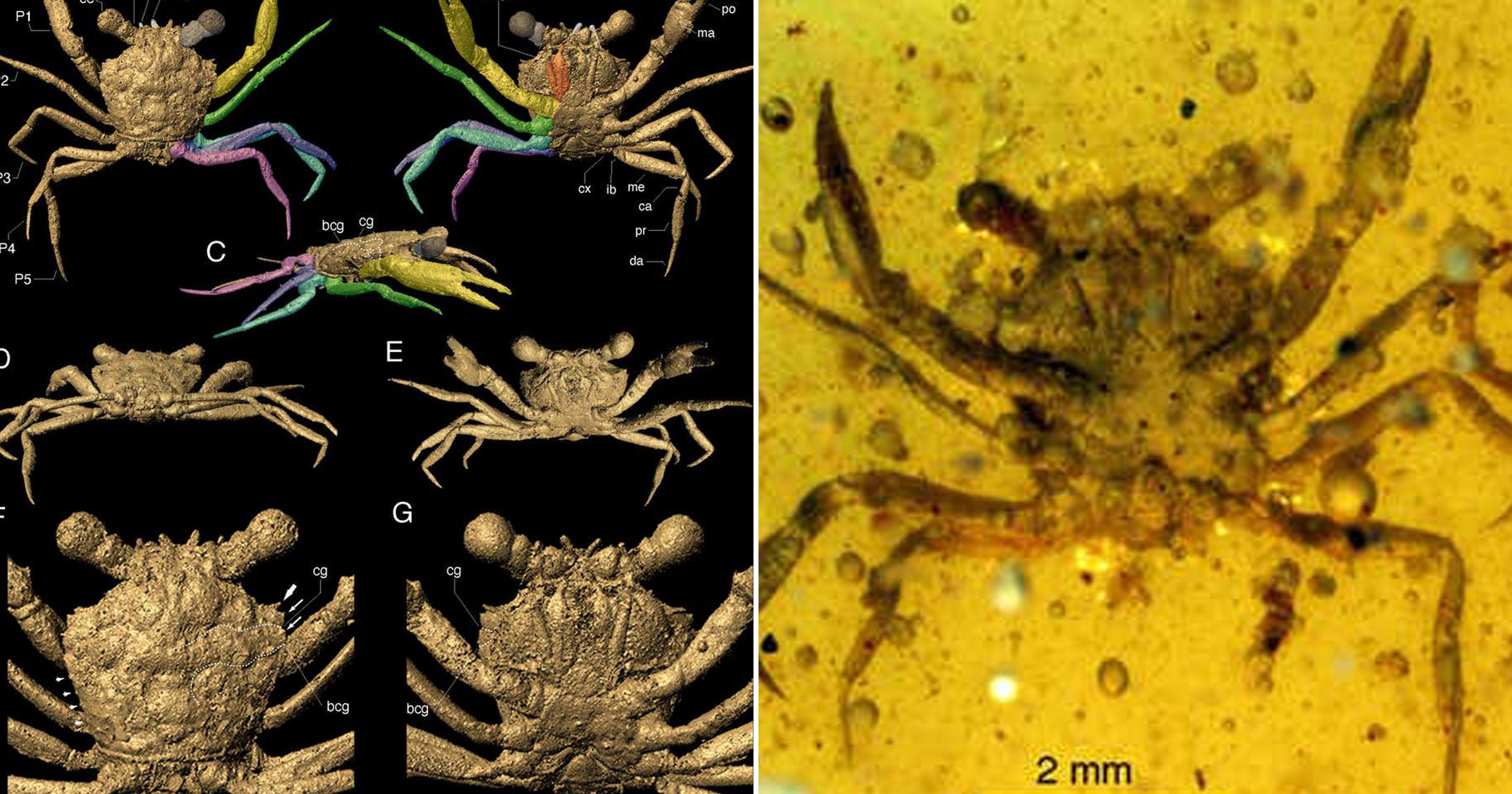 The oldest ever crab trapped in amber for 100 million years has been unearthed by scientists.

It dates back to the age of the dinosaurs – and is a ‘missing link’ in evolution.

The tiny crustacean is believed to be the ancestor of today’s red crabs – that migrate in their millions to the oceans for breeding.

Its body is perfectly preserved – including its claws, shell, bulging eyes and even gills.

Like fishes, crabs use the respiratory organs to absorb oxygen from water.

Lead author Dr Javier Luque, of Harvard University, Boston, said: ‘The specimen is spectacular, it is one of a kind.

‘It’s absolutely complete and is not missing a single hair on the body, which is remarkable.”

It has been named Cretapsara athanata – which translates as ‘immortal spirit of the clouds and waters’.

It is the most intact crab in the fossil record. It lived on both the land and in the sea.

Dr Luque said: ‘The more we studied it, the more we realised this animal was very special in many ways.’

Its entombment in the sticky tree resin sheds fresh light on the evolution of crabs. Most during the mid-Cretaceous era looked quite different.

The well-developed gills indicate an aquatic or semi-aquatic lifestyle. Crabs in amber are rare.

They have conquered land and sea at least 12 times since the dinosaurs disappeared 66 million years ago.

In doing so their gills evolved to include lung-like tissue allowing them to breathe both in and out of the water.

But Cretapsara had no lung tissue – indicating the animal was not completely land dwelling.

Dr Luque said: ‘Now we were dealing with an animal that is likely not marine, but also not fully terrestrial.

‘In the fossil record, nonmarine crabs evolved 50 million years ago, but this animal is twice that age.’

Cretapsara bridges the gap – and confirms they actually invaded land and fresh water during the dinosaur rather than the mammal era.

The finding pushes the evolution of non-marine crabs much further back in time.

Measuring just a fifth of an inch wide, Cretapsara was a juvenile freshwater or amphibious species.

It may have been a semi-terrestrial animal migrating onto land from water.

The phenomenon was likened to iconic modern red crabs where land dwelling mother crabs release their babies into the ocean.

They later swarm out of the water back onto land at Christmas Island in the Indian Ocean.

Cretapsara, described in Science Advances, could also have been a tree climber – like a living group of tropical land descendants.

Known as Sesarmidae, they first appeared 15 million years ago during the Miocene.

Dr Luque said: ‘These Miocene crabs are truly modern looking crabs and, as their extant relatives, they live in trees in little ponds of water.

‘These arboreal crabs can get trapped in tree resin today, but would it explain why Cretapsara is preserved in amber?’

The fossilised crab was among a batch of dull and unpolished amber pieces collected by local miners and sold at a jewellery market in China six years ago.

It is a new branch in the crab ‘tree of life’ – rivalled in completeness only by mysterious 95 million year old Callichimaera perplexa.

The very distant relative has been nicknamed the ‘platypus of the crab world’.

Cretapsara and Callichimaera lived during the ‘Cretaceous Crab Revolution’.

It was a period when crabs diversified worldwide and the first modern groups originated while many others disappeared.

They first appear in the fossil record more than 200 million years ago.

Amber has a unique ability to entomb ancient plants and animals thanks to its transparency – opening a window into the past.

Cretapsara joins a list of specimens, including feathered tails of dinosaurs, that have been invaluable to finding out about the story of life on Earth.