It was a sunny afternoon with light streaming in through the curtains in my living room when I heard the words run through my mind: “Don’t do it, Don’t do it.”

But it was too late. I could feel a brief, sweet moment of lightness bloom in my skull – the mental equivalent of a gust of cold air on a sweaty face after a run – as I stretched my arm upwards. “Argh!” I yelled, as I flung the Connect 4 across the room. I walked to pick up shards of plastic from the floor and my cheeks felt sunken. Then I looked over at my children, then seven and five, standing in the hallway. Tears were streaming down their faces. I’m throwing things now, and scaring them? I thought. In order to get these children, who I love more than anyone, or anything, to listen? Who the hell was I? 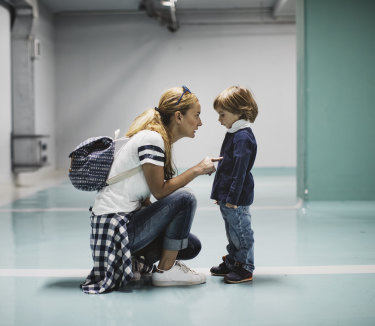 “One can become very violent just with words,” says one mother who said parental burnout led to her feeling enraged around her children. Credit:Getty

I told no one but my husband. How could I? Angry mothers are repellent.

Driven to rage because your career is on the downswing, and you can’t get pregnant? You’re Joan Crawford’s wire-hanger wielding child abuser in Mommie Dearest. Desperate because your wife and the mother of your children has fallen in love with another man, and you try to poison him? You’re the lovable dad played by Robin Williams in Mrs Doubtfire.

But, lately, stories about maternal rage have been streaming out of the mouths of more and more mothers I know.

“I went to Vodaphone and was like, ‘I dropped my phone’,” says one woman I know. She had shattered her phone on the kitchen counter in a fit of rage. One of her two small children was barely sleeping through the night. None of her own family lived nearby.

“I was so mad, that, I had the salt shaker in my hand, and I sort of slammed it on the counter so hard that it smashed,” says another friend. In the moment, it was her two primary school-aged kids, who wouldn’t stop fighting who sent her over the edge. Her daughter replied: “I think you might have put that down a bit too hard, mama.” The moment shocked my friend. “They both had the look of fear in their eyes,” she says.

Like an increasing amount of mothers around the world who have admitted to feeling enraged over the last year, my friends name the same culprit: parental burnout. The phenomenon – exhaustion as a result of being physically and emotionally overwhelmed by parenthood – was first put forward by American researchers in the 1980s. It’s had loads of press since then, including a 2017 interview with singer Alanis Morissette whose debilitating exhaustion, the result of postpartum depression, meant she could “barely decide what to eat for dinner”.

For years, parental burnout studies cited having a sick child as the cause. Then, in 2018, a landmark Belgian study confirmed not only many other common sources of motherhood burnout – fear (about not being a good enough parent), perfectionism and mental stress (due to feeling overwhelmingly responsible for how their children turn out) – but the rage that often resulted from it. (“One can become very violent just with words,” one of the mothers who was interviewed said. “I used to say horrible things to my daughter, stuff like, ‘I’m so tired of you, I’m sick of the child you are.’ It’s awful for a child to hear that.”)

We all know Australian mothers are struggling. One 2019 report showed that one in five experience depression and anxiety in the period from conception until a year after a child’s birth. And anger is a common symptom of depression and anxiety. (Studies also show that parental verbal aggression can increase their child’s risk of mood and anxiety disorders.) Many of the factors that have long contributed to mothers’ high rates of depression – infertility, unequal economic and social conditions – and often lead to anger aren’t going anywhere anytime soon.

And, yet, in the seven years since I chucked the Connect 4, I’ve seen little that normalises the anger that naturally arises from parenting, or addresses how best to handle it.

On top of that, more parents are experiencing it now because of the stress of the pandemic, says clinical psychologist Shelagh Lloyd.

“After last year people’s fuses are shorter, and so maybe things that might not have been so stressful before might push them outside of their window of tolerance,” says Lloyd, based in Geelong, an insight backed up by a recent Australian study of 2000 parents. “Normally, we can stay within that, ride the bumps of life, but if there is enough stressors, we can be pushed outside that.” Chronic stress, she adds, can push parents into “fight or flight” mode. And when they’re in that mode, one small, additional parenting stress can be all it takes to set them off.

Parental rage is also more taboo than ever. “Particularly in the current climate, where domestic violence is very much being spoken about, and is on the table, we don’t want to be condoning that it’s OK to be smashing people or things when you’re out of control,” says Sydney psychologist Dani Klein. “Particularly as an adult, and you’ve got the power.”

It’s normal, she adds, for parents to feel “totally at their wit’s end”, especially when they have small children, are sleep deprived, or experiencing other life stresses. “It’s relentless. It doesn’t matter whether they’re [children are] zero, or 18, there’s always something being asked of you.”

It’s how we express our anger that matters.

“Anger and conflict are normal and healthy,” says Klein. “Rage is something that implies you’re out of control and that’s not healthy. That’s something you need to explore further, particularly if it’s going on repeatedly. I think, in the life span of any parent, there will be times when you’ve lost it. But you want to be able to say, ‘I remember those three or four times where I smashed the salt shaker and it was so terrifying for everybody, because it wasn’t like me.’”

To help avoid getting to that point, Lloyd recommends parents recite a mantra – when they’re feeling overwhelmed and angry – that provides compassionate encouragement and an opportunity to calm down: “This is hard. I’m not the only parent struggling to do my best. I hope I can be kind to myself.”

But what if you’ve already crossed the line? (Both psychologists clarify they’re speaking about parents who are, in their expressions of anger, behaving atypically and not physically harming their children, rather than those in “forensic” settings who have committed a crime against their child.)

Focus on your child and schedule a time to do something together that they want to do, says Lloyd. One of her client’s daughters, for instance, asked her parent to print out lyrics to a song and belt them out with her in a park. “What happens is the parent comes back and remembers what they sort of forgot in all the stress. It’s their bond with their child that’s the most powerful repair strategy.”

Parents should also drop their guilt over feeling angrier than they expected, as it distracts them from moving forward and repairing the relationship, says Lloyd.

Or, you can do what another of one of my friends settled on. A swear jar. “Usually, I’m like, ‘I’m so f–king over this, f–k everyone’,” she says, adding that her anger comes from being “run ragged trying to manage everybody”. (She has three children.) It’s helped her to stop swearing. “It was obscene. We could have had a one-way trip to Paris.”

Tags: eyes, Fear, had, in, their, they’
You may also like
Celebrities News