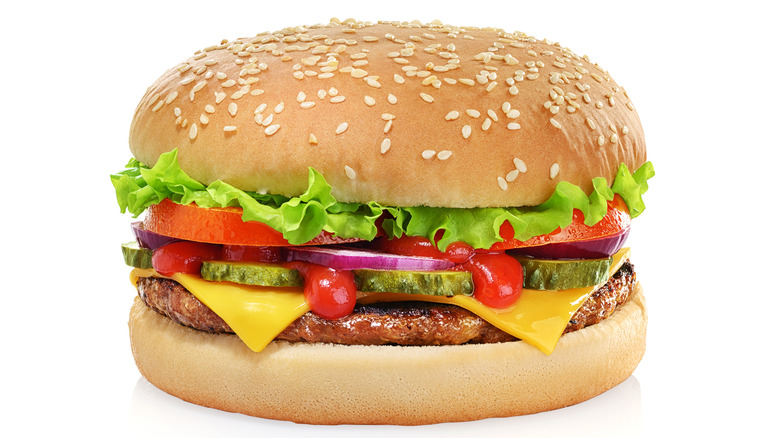 We all know fast food is fast. But that’s about where the truth ends when it comes to fast food advertising. The job of these ads is to entice consumers into coming into their stores by showing off the newest and most trending items on their menus. And trust us, they are throwing down some major green in order to do so. In 2017, fast food companies spent a combined total of $11 billion on advertisements alone (via HuffPost).

Most of us have noticed the difference from what is on the screen to what we get in a greasy bag through our car windows. That heavenly looking burger on the commercial with perfectly semi-melted cheese, topped with refreshingly crisp lettuce, and sandwiched between to airy buns that look like they came out right out of a piping oven. When in reality, that same burger is squashed down to half its promoted size, contains cheese that could double as glue, and is topped with a few sad strands of droopy lettuce.

And it’s not just the fakeness of the product we’re here to expose. No, fast food ads have crafted a multitude of ways to entice both future and current customers into their stores.

That cheese you're drooling over is really glue 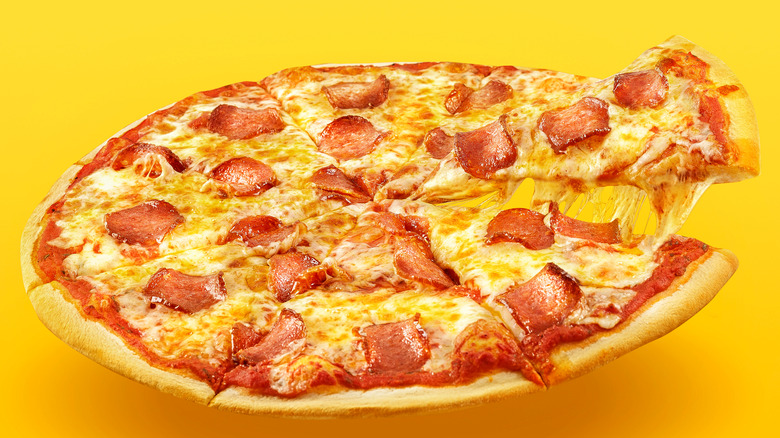 We can start with the “ingredients” you see on TV. You know that slow motion shot where you see a slice of pizza being pulled away from the whole pie? And that stretching, drool-inducing melted mozzarella holds on until the very end of the shot. Well, all that cheesy goodness is actually glue mixed with mozzarella. Glue gives the “cheese” an extra memorable stretch (via YouTube).

You may also be surprised to find out that those thirst-quenching fountain sodas and iced teas you see on the commercials are filled with ice cubes made out of plastic. Real ice cubes melt and dilute the drink which isn’t as photogenic (per So Yummy).

The next sneaky trick revealed is played on a popular breakfast item. Those mountain-high stacks of pancakes you witness on the screen or billboards really have cardboard inserts in between every layer to add inviting volume. And if that doesn’t kill your dream of cutting through a tall stack, then finding out that the syrup they pour over the top is actually engine oil will surely quell your cravings. Why do they use engine oil? Because real syrup will absorb quickly into the pancake instead of sitting on top of the pancake and attracting us with its warm and sugary goodness (via YouTube).

Companies are zeroing in on children 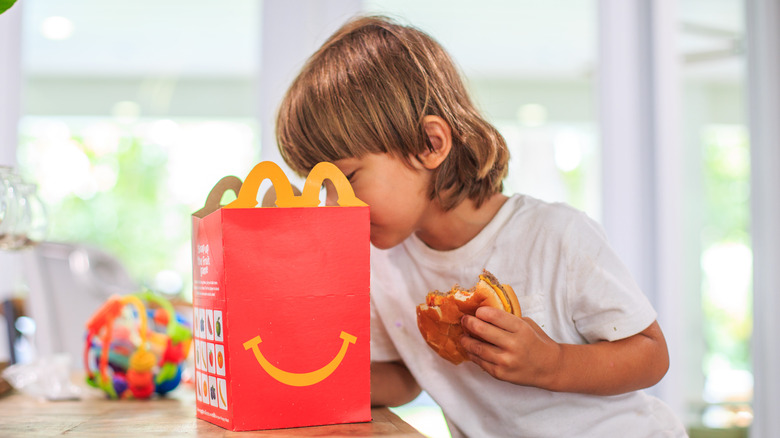 On the other end of the spectrum, fast food ads have also shifted toward showing a more authentic product in order to build trust with the consumer. Burger King has recently proven this to be a successful tactic after featuring mold in a food ad. They showed a timeline of their famous Whooper decaying to highlight the burgers natural ingredients (per Bizadmark). Highlighting the natural ingredients is a great way to distract the consumer from the fact that it isn’t the healthiest meal option.

In addition to winning over customers by showing the authenticity of their product, many food ads are specifically geared toward a younger audience in order to secure them as life-long customers. “When you have companies going after toddlers and infants, it’s insane,” says Rafael Perez-Escamilla, a professor at the Yale School of Public Health. Adding, “Once you hook people ― especially starting with young children, which is very upsetting ― essentially you start training them not only on your brand but on how sweet, how salty, how caloric they’re going to like [their food] as they grow” (via HuffPost).

It’s okay to hit up the drive-through every now and then. Just be aware that these companies are spending loads to get you there more often. But now that you know how calculated their approach is, it might make it easier to be less tempted and enjoy those limited cheat days to the max!

Tags: behind, Secrets&, Surprising, the
You may also like
Celebrities News