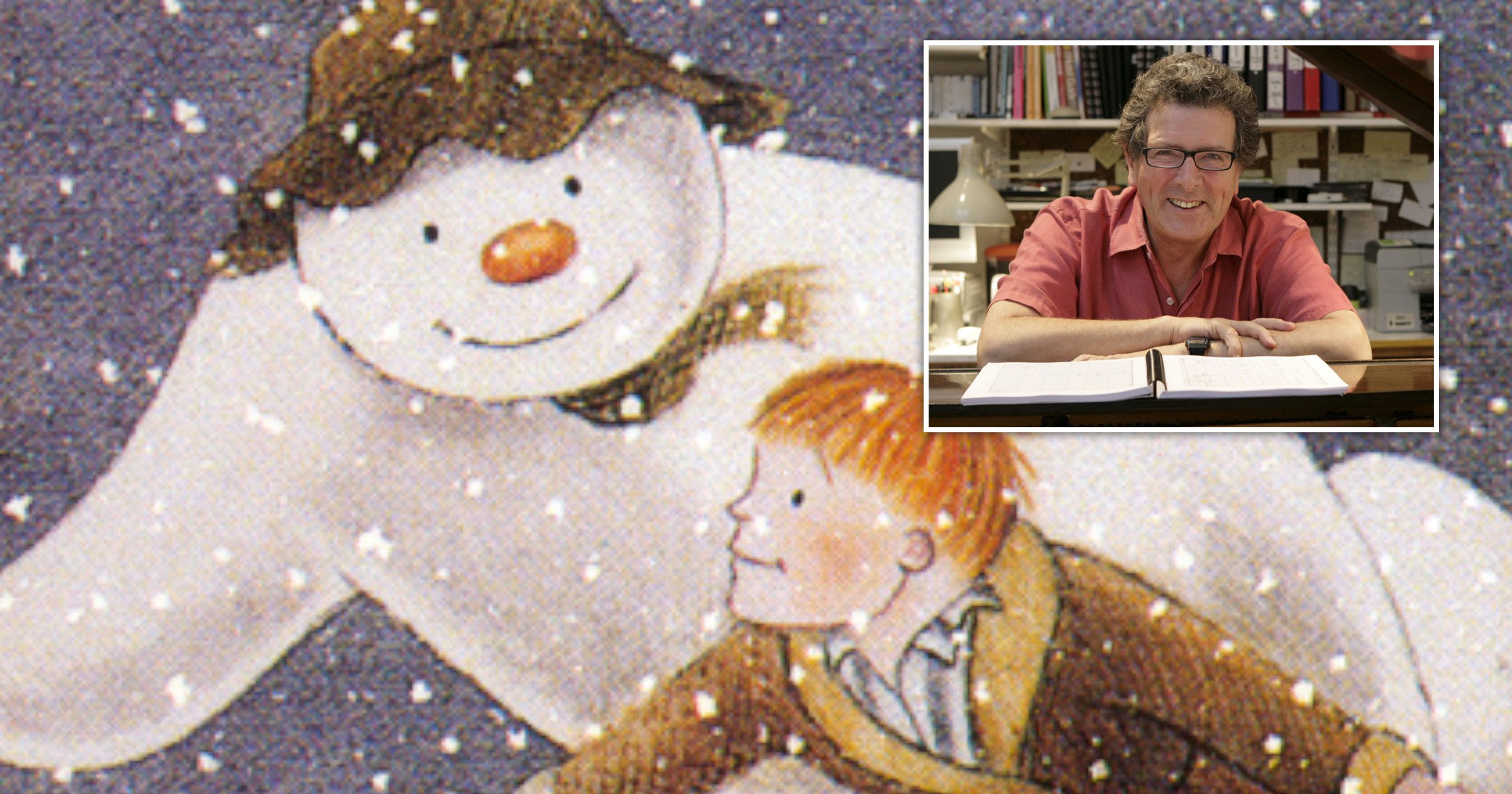 It’s one of the most iconic animated films of the 20th century, with a soundtrack that brings many to tears.

However, the story of The Snowman and Walking In The Air, and how the pair were woven together, isn’t as straightforward as you might think.

The Snowman’s composer, Howard Blake, did not write Walking In The Air specifically for the reimagining of Raymond Briggs’ festive story book – it was coincidence after coincidence that brought them together.

In fact, Walking In The Air started life as a fleeting idea, haphazardly scrawled on the back of an envelope.

In an interview with Metro.co.uk, Blake recalls a tumultuous time in his life, where he had been ‘too busy and I had a sort of collapse’.

‘I had to get away from it all and think things through, I went and sat on a beach in Cornwall, and I lived there for about two months.

‘I wanted to write a symphony about perfect innocence, the innocence with which we’re born and which we lose.

‘I was walking on the beach and this tune came into my head. And I thought – “that’s it!”.

‘It just came to me, and I wrote it on the back of an envelope.’

Blake had just created the very beginnings of what would become one of the world’s most beloved songs – but he didn’t know what to do with it.

Weeks went by, and the composer tried to bring the song to life in different ways, but nothing seemed quite right.

His friend, an animation director from Canada, had to drop in at a cartoon studio to pick something up, and Blake agreed to go with him before the pair went for a bite to eat.

There he bumped into John Coates, who told him: ‘This is a bit of a nerve, but I’ve made this thing called the Snowman. I have some music done for it but I don’t think it’s quite right – would it be very rude of me to ask you to have a look at it?’

As soon as Blake saw the hand-drawn images of the little boy and the Snowman, he knew: ‘That’s where that tune belongs’.

‘It was a match made in heaven,’ the musician said. ‘It was meant to be.’

It was Blake himself who told Coates that the film should have no dialogue at all, and should be led by music alone: ‘And John said: “Impossible! You can’t do that!”‘

In an incredible twist of fate, Channel 4 had just opened its doors the day before, and Blake recorded a demo version of Walking In The Air, with just himself playing the piano, and sent it to Jeremy Isaacs; it was his very first day at Channel 4.

The rest, as they say, was history.

‘A lot of things in this world started on the back of an envelope,’ Blake, who has written hundreds of compositions, said.

‘[Walking In The Air] is a very special piece. I had to wait for the right place, I knew it was very special.

‘I knew right from the moment I saw the film, and when we put that music to that film, it just created some kind of magic.’

The Snowman first aired on Channel 4 on Christmas Eve in 1982 and became an instant phenomenon.

Since then it has been reimagined as a ballet, stage show, countless school plays and musicals, all around the world – and Blake has been there each step of the way.

The stage show, which has run for over 25 years, was first envisioned to be a pantomime, but Blake put his foot down, telling the Royal Shakespeare Company director: ‘That is terrible! I will not allow you to do it!’

Instead, Blake lived in an artists’ flat right beside the theatre for a full week, extending the 26-minute film into an 80-minute extravaganza, adding new characters, new scenes and new music, incorporating the ballet performance he had worked on in Sweden.

‘The director was terrified that I wouldn’t finish in time and it would be a failure,’ Blake admitted.

‘But the day before the first night of the show, he came to my room and told me to look out the window, and the whole of Birmingham Square was packed full of people!

‘I asked if it was a political demonstration – but it was people buying tickets to the show.

‘It sold out for 93 consecutive performances. And I told him: “It’s a good job you didn’t do the pantomime.”‘

Blake is rightfully very protective over his work, particularly the composition for The Snowman, and has in the past refused to give his permission for his work to be used if he doesn’t believe it’s right.

‘It’s like giving birth to a child, you’ve got to look after the child and make sure it gets what it needs.’

Speaking on the recent controversy over the planned BBC Radio version of The Snowman, which would have seen all music removed and replaced with vocals only, Blake is adamant that axing it was the right decision.

‘It looked like I was this ogre’ for not being happy with the planned show, Blake said, but he added: ‘I would have allowed it to happen – just not like that!’

‘There was this big to-do, and then I was told that The Queen was interested in it and the whole Royal family, and I said, “You never told me that!! Why didn’t you tell me that!”

Blake did give his permission for his work to be used in the end, ‘(As long as I don’t have to hear it!)’ but still warned it was ‘a terrible idea’.

When he got the call from Radio 4 that they had decided not to go ahead with the production after all, Blake celebrated.

‘I said “Hurrah! Wonderful! Thank you so much!” They were doing exactly what needed to be done in the first place.’

Blake explained that he gives permission for his work to be used multiple times a day, and almost always approves the productions, but will put his foot down if he is unhappy.

‘People are [making reboots and remakes of classics all the time], and what happens if they make a horrible version?

‘You stand the risk of severely damaging the work – people decide they don’t like it and suddenly your audience shrinks.’

The continued love for The Snowman, and Walking In The Air, is likely in equal parts due to the phenomenal story, music, and nostalgia it brings – along with Blake’s guarding of his work.

Thirty-nine years after its release, it remains one of the most beloved Christmas movies of all time, and is aired on Channel 4 on Christmas Eve – the anniversary of its release – each year.

The Snowman airs on Channel 4 on Christmas Eve at 5pm.