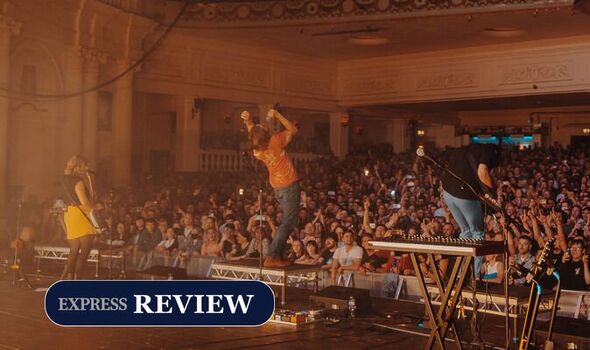 The last time The Midnight were in the UK was back in November 2019 at the Roundhouse. It was their 100th show ever, and they delivered a performance that was worthy of their popularity.

This weekend, the LA-based band played their 149th (“Or 150th, depending on who you ask”) show at Brixton Academy.

And the two performances were like night and day.

From my perspective, The Midnight have always been a little plagued by their popularity. Their endless stream of new fans on the internet have continued to grow month-on-month (especially over the pandemic). But these die-hards have also been the first to criticise any changes made to the band’s style. The Midnight proved that they are not only bigger and better than their fans might realise but that they are, without question, one of the next iconic rock acts of the generation.

Their set opened up with the band launching into Neon Medusa, one of their more raucous hits.

Singer (and one half of the “official” band) Tyler Lyle strolled casually onto the stage to dive into the track’s smooth-as-silk lyrics. Before long, he grabbed his guitar and started shredding along with the song while continuing to croon away effortlessly with his gorgeous tones.

Although Tyler exuded high energy and passion throughout the set, he was always calm. Casual. Completely at ease. A vast difference to how he played back in 2019. Then, he could have been considered a little stiff; but now, he has become one with his performer persona.

And it’s easy to see why he’s so relaxed with such a powerful new band line-up behind him, who has his back at every turn.

Tim McEwan – the other half of The Midnight – previously occupied a drum pad, but has now moved over to a full drum kit – perhaps the band’s best choice to date. The extra percussion and drama delivered by Tim throughout the set really thickened out the band’s presence, elevating them to a real, three-dimensional band; rather than just an electronic act with a couple of guitars thrown in for good measure.

Lelia Broussard returns with her relentless bass guitar and overwhelmingly stunning voice. She took the lead on Jason (the band’s most recognisable song) while effortlessly delivering enchanting harmonies along the way. If she doesn’t get officially enrolled into The Midnight soon I’m going to poach her for my own band.

Lelia’s band partner Royce Whittaker takes on lead guitar, bringing an ounce of 1970s hair metal to The Midnight’s new look. I’ve only ever seen a handful of other guitarists play as well as Royce did at Brixton, and he is something special. Delivering solos that created feasts of effervescence, he really amped up the excitement in The Midnight’s approach to live performance.

Rounding off the band was none other than Justin Clunk – the sax man. Like a force of nature, Justin exploded onto the stage with his brass riffs (Vampires, Sunset, Days of Thunder, etc) while never taking the limelight away from Tyler and co.

Overall The Midnight’s performance has transcended to a jaw-dropping level. Not only did they absolutely own every minute they were on stage, it felt like they could have claimed even more. Every member of the audience was eating out of the palm of their hands. If they were to take the stage at The O2 Arena, could they convey enough emotion to satisfy their fans? I really think so.

As ever, the unexpected crux of The Midnight’s live show is the immense heart they bring along the way.

Tyler reminded fans: “We’re musicians, not politicians,” before telling each and every person there that they were loved. He took moments through some of the band’s more open-heart tracks to ask fans: “Can you feel that? It feels good, doesn’t it?” Similarly, the bigger hits were coupled with Mr Lyle screaming at fans’ faces: “I see you! I see you!” It was, honestly, kind of beautiful. He really tried to make every member of the audience feel like they were good enough. Like a group therapy session, or a midnight mass.

Ultimately, though, between the therapy and the heart, the band delivered an unbelievable set that would fit right into much larger venues. And, the next time they are in town, you can not afford to miss them.

The Midnight hit the road again in autumn.