Want the most up-to-date celebrity exclusives sent straight to your inbox every day? Sign up now and join the club!

Kate Middleton and Prince William are about to celebrate their ten year wedding anniversary, but it was Willem Marx who stole her heart way before she became a Royal.

Before Kate, 39, who has been given a sweet nickname by royal fans linked to Princess Diana, packed her bags to move to Scotland to study at St Andrew's, she dated her "first love" Willem Marx when they were studying at Marlborough College in 2000 together.

Willem and Kate’s romance may have only been a brief relationship at the time but the pair have remained on good terms since going their separate ways, with him being invited to Kate and Will’s wedding ceremony at Westminster Abbey. A month before the couple’s 2011 wedding, The Telegraph reported: “While Prince William’s first university girlfriend, Carly Massy-Birch, is still waiting for her invitation to his royal wedding, Kate Middleton’s former beau, Willem Marx, has had more success.

“Mandrake [Telegraph insider] hears that Marx is the only male chum from Kate’s schooldays to have been invited to the ceremony at Westminster Abbey.”

When Willem was asked about his invitation, he was said to have replied at the time: “Who told you I had been invited?” 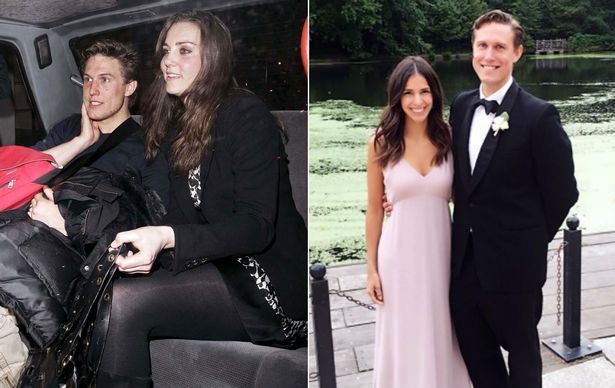 While Mr Marx was quick to shut it down and said it was a “false assertion”, one of Kate’s close friends explained: “Willem means a lot to Kate.”

Since graduating Oxford University, Willem has gone on to be a journalist for business channel CNBC and is now happily married to TV presenter Johanna Botta as well as having a child together.

After Kate and William met for the first time in their university halls, they were friends for a year before they started to date.

The mum of two also dated Rupert Finch, who was in his final year of studying law, for just under a year in 2001.

“Kate actually had another boyfriend when she first got to St Andrews, Rupert Finch, who by all accounts was a nice man,” a source said.

“Prince William, he kind of expressed a bit of interest but I think Kate was still playing hard to get. He wasn’t terribly sure if she was interested." Rupert was also invited to Kate and William’s wedding and they went on to be guests at the solicitor’s ceremony to Lady Natasha Rufus Issacs in 2013.

April 29th will mark a decade since Prince William wed Kate Middleton in front of a crowd of well-wishers and a reported two billion viewers from around the world.

To celebrate the Duke and Duchess of Cambridge's union, OK! has exclusively brought you a limited edition collector's issue – out now.