By the time his ball glided agonisingly past the 17th hole, its island green drowning any last embers of hope, Lee Westwood already knew fate had conspired against him once more. He had battled with a signature resolve built up over three decades, even as his driver reared and his putts bucked off-line during the final round at TPC Sawgrass, but merely treading water was never to be enough. When Justin Thomas summoned the truly exquisite, England’s enduring contender had already drained every last drop.

It remains a great shame that in such a glittering career Westwood still does not boast the glory of a major to crown his already substantial legacy. And while The Players Championship does not qualify as such, despite its equally durable marketing campaign, it would still have represented a new peak, if not the pinnacle, for the 47-year-old. That is no mean feat, either, in a career featuring 44 victories across six professional tours, which began in Nottinghamshire and ended Tiger Woods’ long-standing reign as world No 1 in 2010.

It was that year, at the height of his powers, that Westwood suffered one of his most agonising near-misses. Leading by one shot heading into the final round at Augusta, he stuttered as Phil Mickelson’s roulette wheel of risk and invention came up trumps. That bitter pill played into a narrative that, for all Westwood’s success, and as the wealth continued to flood in, he was not prepared to make those unconditional sacrifices to cross the hurdle.

If that felt harsh, Westwood knew it was not altogether untrue. It was Gary Player way back in 1997 who warned that Westwood risked wasting the true depths of his talent due to a lack of commitment, namely around fitness. Nor is it of any great coincidence that many of his great veins of form have been closely entwined with a tightening of the waistline. But if it’s easy to wonder what difference an extra measure of intensity in his twenties might have made, it’s also a disservice to the player Westwood became and still represents. Beyond that, it diminishes the quality that distinguished him from the entire field on Sunday afternoon and has so often underpinned his success: the sense of sheer enjoyment.

As draws were exchanged for slices like a beleaguered tennis rally on Sunday, a fatigued Westwood never stopped smiling at Sawgrass. It has been the defining image of his renaissance, with his fiancé, Helen Storey, on the bag. He has never been a glass-half-empty character, neither literally nor figuratively, but there have been periods when golf’s vicissitudes sank their teeth and threatened to drain that natural joy from his game. At one stage, there were ill-judged whispers of retirement during a four-year spell without a victory, or at the very least an unshakeable rust, as Westwood was ushered into a vice-captain’s role at the 2018 Ryder Cup. 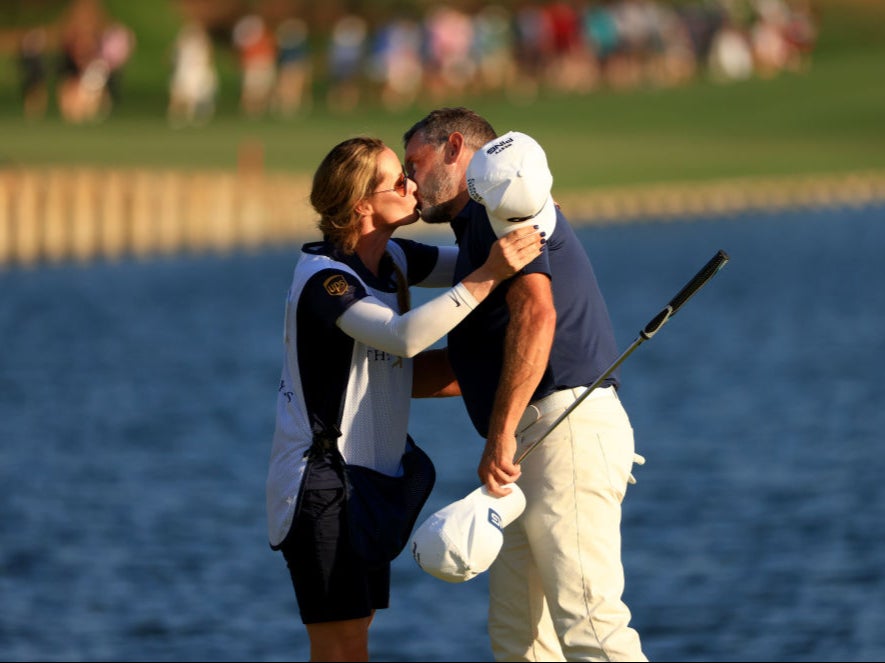 Now, two second-place finishes have returned him to as high as No 19 in the world rankings – far beyond that of any player of a similar vintage, made him a betters’ choice at both Augusta and The Open, and a shoo-in for the Ryder Cup in September. But Westwood’s resurgence is not so much the result of an epiphany as a return to square one. “A lot of this has just come from me knowing myself,” Westwood told Golf Digest in 2019. “I’m quite a dangerous golfer at the moment because I don’t care anymore. Greg Norman told me to do that years ago. He said, ‘Try your balls off and don’t give a bleep about the outcome or the result.’ So that’s what I’m trying to do. I’m playing like I did when I was a kid really. That doesn’t mean I’m not trying. But I don’t care. There’s a difference.”

Storey has become an almost permanent fixture as caddie throughout the pandemic – “like having a psychologist out there with me” – while Westwood’s son, Sam, will carry his bag at The Masters in April – with the pair heading to Augusta together for a scouting trip this week. As the signs of wear and tear inevitably creep in – even after losing 12kg during lockdown – now is no longer a time for bloodletting practice but to savour and preserve the aspects of golf Westwood has always treasured. It might seem blasé, and should certainly not be mistaken for a lack of effort, but it’s the very foundation of his love and longevity, and what allows him to still go toe-to-toe with those 20 years his junior. It takes a thick skin to sustain so many near-misses, but then again he might never have so happily absorbed the blow.

Live Rugby union coverage direct to your inbox every week

Live Rugby union coverage direct to your inbox every week

After all, this fickle old game gives and takes with both hands, and when all is said and done, nothing is quite as lasting or addictive as its most simple pleasure. “I take it for what it is: a game,” Westwood said after walking off the 18th green. “We’re just trying to get a little white ball into a little white hole. It gets treated far too seriously occasionally. With what’s going on in the world, it’s fun to be doing a job that I love and that I’ve done for 28 years.”

Tags: Lee Westwood, The Players Champ
You may also like
Celebrities News