One presence you can’t escape inside the sprawling campus of the COP26 climate talks is that of Greta Thunberg, though she chooses to spend most of her time on the other side of several rings of security.

She may well have contempt for the suits inside the wire, but they appear not to share the feeling.

In his first address at the talks Boris Johnson quoted Thunberg’s scathing assessment of the collective failure of the world’s governments and institutions to address climate change. 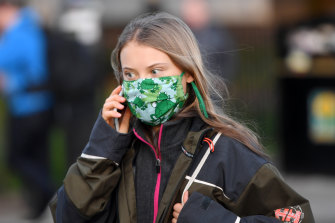 “All those promises will be nothing but blah blah blah – to coin a phrase – and the anger and impatience of the world will be uncontainable unless we make this COP26 in Glasgow the moment when we get real about climate change,” he said.

Announcing on Wednesday in Glasgow that nearly 500 financial services firms had signed up to an initiative to align US$130 trillion with the Paris climate goals Mark Carney, the United Nations Special Envoy for Climate Action and Finance and former governor of both the Bank of England and the Bank of Canada quoted her again.

The man who introduced Carney at the event, Nigel Topping, the UK’s “High-Level Climate Action Champion” responsible for driving business engagement with the COP quoted her too. Blah blah blah would not be enough in Glasgow, he said.

And this is the point.

The choking, terrible fear of COP’s UN and UK organisers was that it would fail hard and fast.

There was a real chance of this and not just because of the pandemic and the fracturing of the mesh of international relations over the six years since Paris.

In Paris the world agreed on a framework.

Parties to the agreement could get away with making promises and then going home.

Here in Glasgow though, promises are being tested.

For Glasgow to work not only do national targets associated with the Paris agreement have to be updated, but real money has to be committed. Details of how incumbent industries are to be reformed – or seen off – have to be thrashed out. Paris promised, says the COP president Alok Sharma, but Glasgow has to deliver.

These are harder conversations to have. It can’t be blah blah blah.

In order to give the talks a whisper of a chance of success, momentum had to be demonstrated in the early days, and if it couldn’t be demonstrated it would have to be fabricated because without movement at the start of these talks there’d be none at the end.

So far the momentum seems real. Increased national reductions commitments as well as the pledges to reduce methane and end deforestation are being found by credible analysts to have the potential to significantly reduce warming.

On day four of the talks it is expected there will be significant announcements about the international movement to kill off the coal power sector as fast as possible, a key goal of the UK organisers of this COP.

It is expected that the two themes – finance and carbon reductions – will be woven together in these announcements, with some emerging economies to be paid off to abandon coal faster.

The Powering Past Coal Alliance, backed by the UK, will welcome somewhere near 30 new members including Ukraine, which has Europe’s third largest coal fleet, and Singapore, which only opened its first coal power station a decade ago.

Another 25 or so 24 countries and public finance institutions are expected to sign up to an agreement to end coal financing. 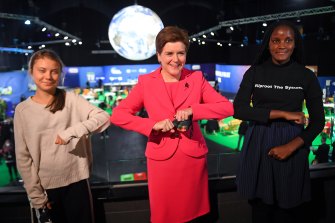 Johnson himself alluded to this move on coal in his opening speech to the COP, in which he described the fossil fuel era and the use of coal-driven steam engines in particular as a “doomsday clock”.

“It was here in Glasgow 250 years ago that James Watt came up with a machine that was powered by steam that was produced by burning coal,” he said.

“And yes my friends – we have brought you to the very place where the doomsday device began to tick.”

It’s here in the coming hours that COP organisers hope to bury coal and stop the blah blah blah.

Whatever they achieve, or fail to achieve, Thunberg will clearly not take a backwards step.

Get daily updates on the climate summit that will shape our future. Sign up to our COP26 newsletter here.

Tags: effect, f, Glasgow, Greta, Is, the
You may also like
Celebrities News