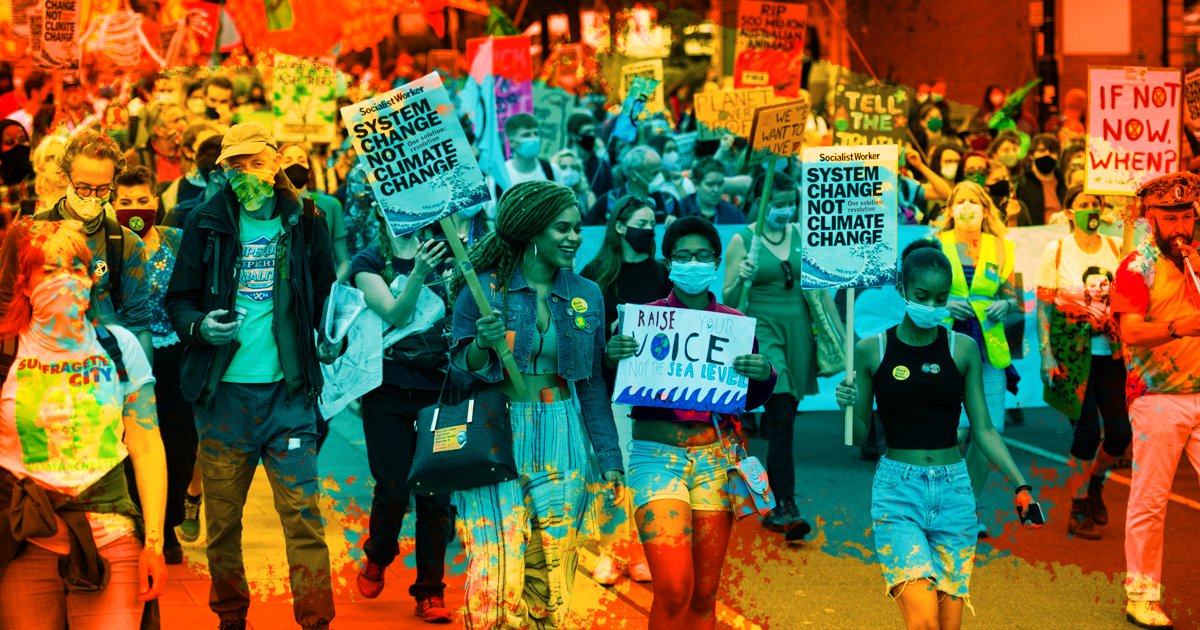 We’ve been told climate change will affect us all, no matter who we are, and as it’s a global issue, it’s easy for us to believe we will all be impacted by it equally – but that couldn’t be further from the truth.

The truth is that racialised communities have been, and continue to be, subject to the worst impacts of climate change and environmental crisis.

From a recent report showing that Black people living in US cities are subject to double the heat stress of their white counterparts, to the effects of wildfires on Indigenous Australians, to 62 people being killed by avalanches and floods in Azad Kashmir and the East African droughts threatening hundreds of thousands of lives, there are multitudinous examples of how climate change inordinately impacts people of colour.

Coupled with present-day environmental racism in all corners of the world, the climate crisis threatens people of colour on a scale unmatched by any other demographic.

This even affects the air we breathe. The 2011 census showed that working-class people from Black, Asian or ethnic minority backgrounds were 50% more likely to live in an area of poor air quality than white people of equivalent income.

A 2013 report found that 82% of the London primary schools exposed to illegal levels of air pollution are deprived. These are just two shocking statistics of many, in the sixth-largest economy where 40,000 deaths a year are caused by air pollution.

Climate justice was originally spearheaded by groups on the front-line of climate disaster, organising against colonial violence and defending their land and livelihoods. However, young activists of colour tell Metro.co.uk that climate and environmental organising in the UK has dissociated from these roots, leading to a corporatised imitation rife with discrimination.

Activists say mainstream climate groups have replaced calls for colonial reparations with pushes for consumption changes (such as veganism), abandoning climate justice for ‘green-washing’ measures and pushing out the communities of colour that originated this movement.

Teen climate activist Thiziri Boussaid, 17, tells us: ‘Too often, climate change is wrongly seen as just some “environmental issue” instead of the continuation of colonialism, white supremacy and patriarchy.

‘Without talking about these systemic issues, the entire movement centres a Eurocentric perspective.’

Thiziri argues that the current composition of the climate movement isn’t in an adequate position to lead the fight towards global climate justice.

‘Extinction Rebellion [XR] should not be the go-to climate organisation in the UK,’ says Thiziri. ‘They take a harmful stand against the politicisation of the climate movement.

‘As an ethnic minority, they are incredibly closed-off to someone like me – having an exceedingly white organisation is, by nature, antithetical to the very people that climate change will harm the most and therefore cannot solve the climate crisis.

‘They’ve been alerted of this countless times, but simply will not change.’

19-year-old climate justice activist Lola Fayokun adds: ‘XR has never really seemed that accessible to me because of the fact that it is oriented around a white, middle-class way of organising that doesn’t appeal to me as a person of colour.’

Recent decades have seen the movement that was founded by people of colour for their liberation, oppress them further by replicating the same structures rooted in white supremacy and capitalism the movement should be dismantling.

Activists like Lola say that the climate movement has been tainted by decades of racism, paired with apathy, hostility and ignorance.

There are problematic examples riddled throughout the history of the environmental movement. The ethnic cleansing of Indigenous people in what is now America to make space for national parks to ‘preserve nature’ is a key example.

More recently, XR has been accused of ignoring the disproportionately negative impact that the courts and prison system can have on people of colour in their cavalier approach to being arrested.

‘There is an immense amount of work being done within XR to create that safe environment, including encouraging all activists to take part in at least one of the range of anti-oppression and decolonisation workshops run within the movement, supporting work to support and connect communities of resistance in the global south, as well as diaspora communities in the Global North, and the release of our new 2021 strategy which centres diversity and inclusivity at its core.’

But climate activists of colour still have lived experience of the struggles, and even abuse, that organising in mainstream circles can bring.

They tell us that white organisers are afforded detachment from the climate crisis because of a lack of lived experience or intergenerational trauma. They have the privilege of recreationally engaging in what is a battle for survival for communities of colour.

Although everyone will be impacted by the climate crisis, the ‘global north’ – countries like the UK – has the economic means needed for climate resilience technology (as well as the capacity to mitigate the extent of the climate crisis and provide this technology to countries that can’t afford it) meaning that we may never face destruction on scales remotely similar to those in the ‘global south’.

This privilege has paved the way towards the commercialisation of climate activism, turning a fight for survival into a question of aesthetics.

’In 2020, when there was this society-wide reckoning around racial injustice, I don’t know if the climate and charity spaces really took that as a time to look inward at the way they were functioning and I find that disconcerting,’ says Lola.

‘Organisations that I work in have dealt with racism in ways that have often been woefully inadequate, and there’s been a lot of racism from people within the climate movement.’

This aligns with my own experiences in climate organising.

While I can reel off countless incidences of explicit racism targeted towards myself or people that I know, I can think of even more incidences where other organisers ignored or excused said abuse because it didn’t fit in with their neat projection of what climate ‘activism’ should entail.

‘It is very clear to me that there’s a lot more awareness that there’s a problem, which is some form of progress, but it’s not the same thing as change,’ says Ashish, an organiser active in climate justice movements.

‘It’s relatively easy to acknowledge a problem – it’s much harder to change it, because with that change comes changing power dynamics, and that’s the real measure of progress.’

Another reported problem is that some activists are guilty of adopting a white saviour mindset, placing themselves on a pedestal where they can’t imagine themselves being bigoted to any degree.

‘Sometimes white members of the climate movement try to bring up the racial aspect of climate change but while they do so they are usually actively taking up space that a racialised member could – it feels like they’re being white savourists, trying to “save us” but in reality they’re just harming us’, Thiziri states.

This mindset brings with it a deliberate denial of being complicit in racism – whether that is through ignoring incidents, excusing them or even actively engaging with them.

Lola echoes Thiziri: ‘I’ve been in a lot of organising spaces where the most marginalised people take on the most work surrounding accountability for instances of racism. It’s important that we are really deliberate about how we deal with incidents of discrimination, and also ensure we’re organising in a way where there aren’t those more covert forms of discrimination of who’s doing what work.’

Consistent failure of white people organising in the climate movement to apologise or make any meaningful change was also noted by many who spoke to me.

‘There are countless incidents like this,’ says Thiziri. ‘Or instances where people have only apologised so because they were forced to by our code of conduct – they never go on to actually change their way of working.’

Jodie told me of one specific time where after a ‘particularly bad incident’ she received a message that didn’t really feel like an apology at all.

‘They only apologised after being told by another member of staff that they should,’ she adds. ‘Apologies are consistently just forced formalities without any genuine remorse or commitment to action.’

She continues: ‘After someone has been confronted for their racism, they expect people of colour to improve or educate themselves – even if those people of colour weren’t involved in the situation at all.

‘No minority has a duty to re-experience their trauma for the benefit of any people without colour, and it is unacceptable that it seems to be expected of us to do so.’

Jodie explains that in her experience, when white people are called out about this behaviour, it is met with fragility and defensiveness.

‘In the UK, racism is built into the fabric of white society so that white people are automatically the oppressors,’ she says. ‘No one wants to talk about how in order to be actively anti-racist, you need to first accept, as a white person, that you are racist.’

Jodie’s experiences highlight how the lived realities of people of colour – people who are already dealing with the atrocities of the climate crisis – are frequently disregarded by mainstream activists in favour of stories from the future that fail to recognise that these communities do not exist in a monolith.

Jodie continues: ‘Some people in the climate movement are speaking over people of colour and taking away chances for BAME and BIPOC representation. Society has conditioned white people to believe the things they say aren’t problematic. They’re not interested in changing a world which already suits them.’

Despite what some organisations have led us to believe, climate justice isn’t synonymous with whitewashed, Eurocentric climate action, as geology professor Christopher Jackson explains: ‘Our internationalist response to the climate crisis must centre social and economic justice, with front-line communities leading the fight for liberation, colonial reparations and rapid decarbonisation to carbon zero by 2030.

‘A global challenge like the climate crisis requires a global response.

‘It also requires us to understand the imbalance between the peoples creating and maintaining the crisis, typically in the global North, and those most impacted by it.

‘Given this, we must recognise that communities most negatively impacted by climate change cannot and should not be solely responsible for fixing it.’

As Jodie summised: ‘It’s time for climate movements to make and reinforce the link between social justice, colonialism and the climate crisis, but we can’t do this without addressing the overarching bigotry that exists in organising spaces; and we must do this without hiding behind a protective barrier of white saviourism.’

We have approached Extinction Rebellion for comment. This article will b e updated if we receive a response.