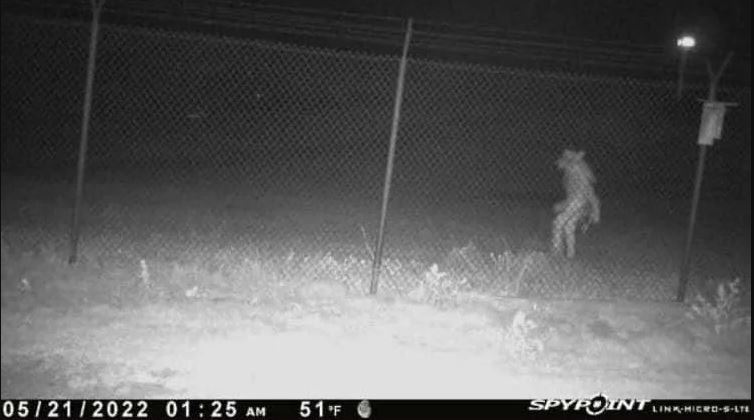 A week or so ago, the internet started passing round a picture of a weird, dog-like creature seemingly standing on two legs.

The snap was taken at night by an automatic trail camera pointed at the perimiter fence of Amarillo Zoo.

The strange, bipedal creature appeared to be walking around outside the zoo and social media began trading theories over what it was.

Now, city officials are putting out a public plea for its citizens to help solve the mystery.

A tweet from the official City of Amarillo account asked: ‘Is it a person with a strange hat who likes to walk at night? A chupacabra? Do you have any ideas of what this UAO- Unidentified Amarillo Object could be?’

A chupacabra, in case you’re wondering, is a vampiric dog-like creature from American folklore. They’re said to be about the size of a small bear and stalk around at night feeding on livestock and, occasionally, humans.

The Amarillo Zoo captured a strange image outside the zoo in the dark and early morning hours of May 21 (around 1:25 a.m.). Is it a person with a strange hat who likes to walk at night? A chupacabra? Do you have any ideas of what this UAO- Unidentified Amarillo Object could be? pic.twitter.com/86Ly9ogtBT

The original image was posted to Reddit by an anonymous user who said it came from a zookeeper’s Facebook group.

‘The keeper said that they caught the image on a trail camera pointed at a perimeter fence and couldn’t figure out what it was,’ the uploader, who uses the handle @Segu1n wrote in the thread.

‘I believe it was pointed from inside the zoo at the perimeter fence.’

Suggestions ranged from Fantastic Mr. Fox himself to one of the werewolves from the classic 2002 sci-fi horror film Dog Soldiers.

For those who have been waiting: San Antonio based cryptozoologist Ken Gerhard broke his silence on the Amarillo âwolfman/chupacabraâ thatâs been making headlines pic.twitter.com/8E1U8Jp9RF

Another Redditor pitched in with a more creative suggestion: ‘That’s a small child with a dead coyote skull on their head. If you look closely you can see the spatula used to skin said animal in small child’s left hand.’

The user responsbile for the snap clarified that the zookeepers hadn’t seen anything like this before on any of their automated cameras.

‘The OP’s other posts go back at least a year and are all just normal animal keeper type posts,’ Segu1n wrote.

Looks like the city officials are on the case. Hopefully we’ll have a resolution to this mystery soon.