Art teacher Chanique Davis kicked off the cultural month by unveiling her creative tribute to Selena Quintanilla-Pérez, which features a smiling portrait of the late Tejano singer.

The Polk County Public Schools district in Florida highlighted Davis’ work and past door designs in a Facebook post on Thursday, stating “The Lake Alfred Elementary art teacher has become famous in our school district (and online) for her awe-inspiring classroom door designs, which celebrate national events such as Black History Month and Asian Pacific American Heritage Month.” 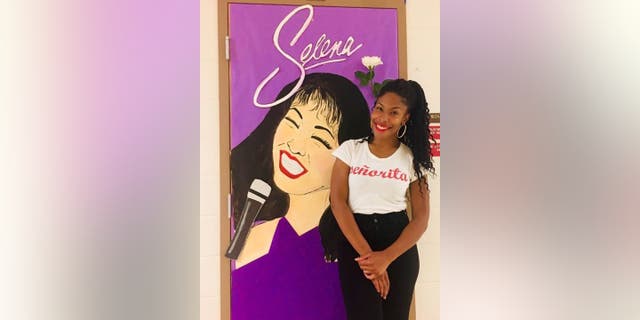 Art teacher Chanique Davis created a classroom door design after Selena Quintanilla-Pérez in honor of National Hispanic Heritage Month, which is celebrated from Sept. 15 to Oct. 15 each year.
(Chanique Davis)

Davis, 34, told Fox News she chose to design a door after Selena because she made a significant impact in Mexican American history and the Latin music industry.

“She is such a profound Hispanic icon. I wanted my kids to know about her,” Davis said. “Selena was not just a singer, she was an artist. She was a visual artist. She drew in her sketchbook. She liked to design clothing and she had many boutiques where her clothing was sold, but she was an artist as well. And so I used her because I was able to create discussion around being multifaceted as an artist.”

Davis went on to say that her door designs lead to deeper conversations with her students. 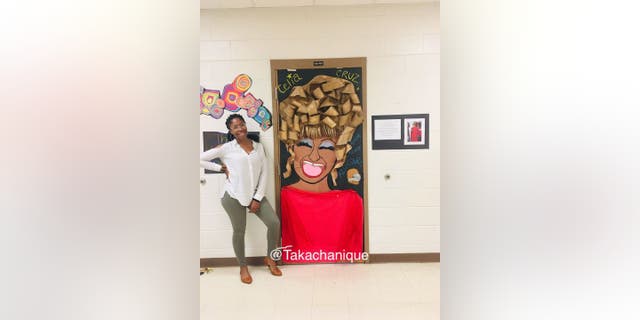 Prior to her tribute to Selena, Davis created a 3D paper-based classroom door design in honor of Celia Cruz for 2019’s Hispanic Heritage Month – who shaped the salsa and merengue music scene with more than 80 albums and songs.

Davis told Fox News she’s been decorating classroom doors after notable or culturally diverse figures since 2018. Each design takes her about six or eight hours to put together.

“I just know the importance of having successful representation shown to you as a child,” Davis said. “It’s important to know that there’s someone you can look at and say, ‘This person is successful. This is someone that I can follow after.’”

Aside from showing positive examples, Davis said she makes sure to teach her students about diversity and inclusion.

Tags: 'awe-insp, creates, teacher
You may also like
Celebrities News