Henson reveals she has a gun and thought about using it to “end it all.”

Taraji P. Henson opened up about a “dark moment” she had during lockdown for the ongoing coronavirus pandemic.

On Wednesday’s mini episode of Peace of Mind with Taraji on Facebook Watch, the actress shared her experience with suicidal thoughts with guest Dr. LaShondaGreen, as they tackled the subject of “mental breakdowns.”

Waiting for your permission to load the Facebook Video.

“So during this pandemic, it’s been hard on all of us and I had a moment. I had a dark moment. I was in a dark place,” said Henson. “For a couple of days, I couldn’t get out of bed, I didn’t care. That’s not me. Then, I started having thoughts about ending it.”

“It happened two nights in a row and I purchased a gun not too long ago, it’s in a safe, and I started like, ‘I could go in there right now and end it all, because I want it to be over,'” she continued.

“I thought about my son, he’s grown, he’ll get over it. I didn’t care,” she continued. “I felt myself withdrawing. People were calling me, I wasn’t responding, I didn’t care.” 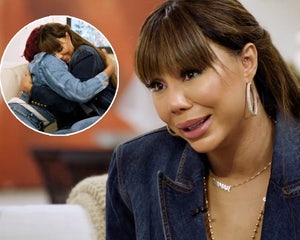 Henson said she decided to confide in one of her girlfriends about what she’d been thinking. “I just blurted it out, ‘I thought about killing myself,'” she explained.

After she did that, said Henson, she felt “so much better” and knew it wasn’t something she would do anymore.

“I felt like, if I don’t say it, it becomes a plan,” she explained. “What scared me is I did it two nights in a row. First, it was like, ‘I don’t wanna be here.’ Then I started thinking about going to get the gun and that’s why when I woke up the next morning, I blurted it out.”

Green said it was “very normal to feel lonely, to not want to do it anymore” and “there are so many things that we think are wrong, that are unhealthy, that are absolutely normal” — especially at a time like the current pandemic.

“You don’t have to believe every thought you have,” she added.

The conversation comes after Tamar Braxton appeared on the show earlier this week to talk about her own suicide attempt. Watch that episode here.

If you or someone you know is struggling with depression or has had thoughts of harming themselves or taking their own life, get help. The National Suicide Prevention Lifeline (1-800-273-8255) provides 24/7, free, confidential support for people in distress.

Tags: 'Suicidal', had, Henson, p, Taraji
You may also like
Celebrities News