An overhaul of the $3.2 trillion superannuation system will begin in a fortnight after the federal government rammed its legislation through Parliament, but the plan almost unravelled after drumming up support from Centre Alliance and One Nation.

The Your Future, Your Super legislation aims to save workers $17.9 billion over 10 years and improve investment returns by heaping pressure on “dud funds” with new performance benchmark tests and stapling workers to their super accounts so each time they switch jobs their employer doesn’t set up a new fund. 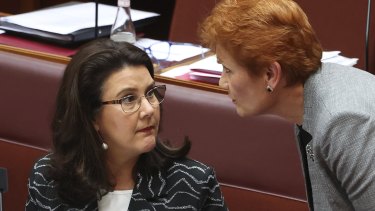 The tests will now kick in on July 1 with stapling to take place in November, after a successful passage through the Senate was ensured following negotiations between Superannuation Minister Jane Hume and Treasurer Josh Frydenberg with One Nation’s Pauline Hanson and Centre Alliance’s Stirling Griff.

“These are really significant reforms. They’ve been opposed tooth and nail by a Labor Party that doesn’t want to reduce people’s superannuation fees,” Mr Frydenberg said, adding these wouldn’t be the last reforms for the super sector.

“Many Australians would ask the question: ‘Why has it taken this long?’ Well the reality is it’s pretty hard to get some of these reforms through the Parliament, as we’ve seen through the Senate, because there are so many vested interests that are fighting hard against more transparency, more accountability and lower fees.”

The federal government pushed three super-related bills through the Senate on Wednesday and Senator Hanson proposed changes, prompting immediate speculation from Labor she had struck a deal to vote for Your Future, Your Super in exchange for support on her amendments. Representatives for Senator Hanson denied there was a deal on Wednesday evening, instead saying she was still in discussion with the federal government and independent Senator Rex Patrick, who wanted significant changes.

One of Senator Hanson’s suggested amendments would’ve let those aged 67 and older to be able to contribute more to their super fund with concessions by lifting the excess contributions cap. This could’ve helped high-income earners who put more in their fund than the 9.5 per cent minimum guarantee. Senator Hanson turned 67 last month, is on a basic salary of $211,250 and receives 15.4 per cent super. About 16 other MPs would have also benefited.

Labor Senator Murray Watt said Senator Hanson was trying to “give politicians a $30,000 pay rise, through their superannuation” while opposition superannuation spokesman Stephen Jones said it was a “dodgy deal” and the government should “hang its head in shame”.

Senator Hanson did not move the amendment on Thursday, instead telling the Senate it had been mis-drafted and she had intended to ensure older “battlers” had an incentive to keep working and contributing more to super.

The federal government denies it ever intended to support this particular amendment. It did support two others, including letting people who withdrew up to $20,000 super during the height of the coronavirus pandemic put the funds back in without penalty.

Mr Frydenberg criticised Labor for its comments about Senator Hanson. “Firstly, I think it’s a Labor slur,” Mr Frydenberg said. “I thought it was outrageous their attacks on Pauline Hanson and they should have a good look at themselves.”

The legislation passed through the lower house for a second time on Thursday afternoon. The federal government had been forced to make a major change to the legislation scrapping controversial extra powers for the Treasurer to intervene in super funds’ investment decisions in order to ensure its passage through the lower house the first time in early June following concerns from Nationals MP Barnaby Joyce.

The government has proposed consultations to extend the tests to cover more funds.

Super Consumers Australia director Xavier O’Halloran said the new legislation would allow people to compare funds properly for the first time. “The reforms will also help people save money by keeping their super in one account, putting a stop to multiple zombie accounts,” he said.

Industry Super Australia chief executive Bernie Dean said it risked locking workers into inferior super products. “The government was forced to drop a number of ideological proposals and to improve the performance tests for funds, but sadly it stopped short of protecting workers from losing their savings by being stuck in a dud super fund,” he said.

Tags: kic, overhaul, Superannuation, to
You may also like
Celebrities News