Senior representatives of more than 20 major Australian sporting organisations have signed a statement vowing to jointly address the scourge of online abuse of athletes during a landmark meeting with the eSafety Commissioner.

The four football codes, cricket, netball, basketball, gymnastics and tennis were among the sports represented at a meeting on Wednesday to discuss ways to tackle the growing issue of racist, sexist, homophobic and other online abuse increasingly directed at their stars. 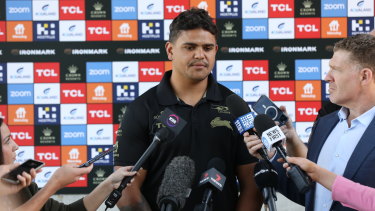 eSafety Commissioner Julie Inman Grant facilitated the round-table discussion that outlined the powers of the world’s first government agency committed to keeping its citizens safer online. It was also an opportunity for the sports – which signed an online safety statement of commitment to work together collectively – to discuss their issues and suggestions to enhance athlete safety.

“Where once fans were limited to yelling their encouragement or venting their frustrations from the stands or at their TVs, today social media allows people to anonymously communicate abuse directly to athletes,” Inman Grant said.

“This abuse can be unrelenting and is often personal in nature.

“In recent times we have seen female athletes, those from Aboriginal and Torres Strait Islander and diverse cultural and multilingual backgrounds increasingly becoming the targets of unimaginable online abuse, hatred, misogyny and racism.”

There have been numerous incidents this year in which some of Australia’s highest-profile athletes have been trolled online. South Sydney star Latrell Mitchell called out racist abuse he received on social media, which ultimately led to the perpetrator, Daniel Robert Hudson, being fined and convicted for using a carriage service to menace, harass and offend in April.

In a separate incident, the person responsible for directing death threats at Mitchell’s family via social media after his sickening collision with Joseph Manu was handed a police caution under the Young Offenders Act.

Canterbury winger Jayden Okunbor called out racial abuse directed towards him in August. The incident was reported to the police, although NSW Police told the Herald that “following extensive inquiries, no further police action is expected.”

Other sporting organisations spoke about the online abuse that some of their athletes have faced. Inman Grant outlined eSafety’s powers and educational resources during the conference, while participants discussed how to ensure internal policies properly dealt with the issue.

“Athletes are role models in our communities who are expected to be in the spotlight as part of their job and it’s important that we have policies and practices to protect them from the online abuse that is levelled at them,” she said.

“I commend the Australian sporting community in coming together to work with eSafety to ensure athletes and staff across all sporting codes have a safe and secure online work environment.”

Tags: SCO, Sports, tackle, the, to, Unite
You may also like
Celebrities News