The love song of critically endangered regent honeyeaters is the lifeblood of the species, but the population has dwindled so low that young birds are losing the tune to their wild melody.

A ray of hope has emerged, however, from a homeschooling program to teach the brilliant black and gold birds to sing their way back from the brink of extinction. 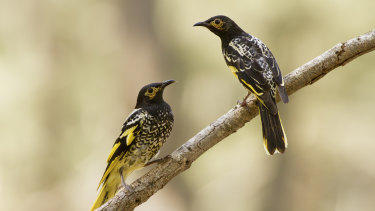 Regents must sing the “right” song to attract a mate. But their warbling, chattering call is heard so rarely now that young birds are picking up the wrong music lessons and singing songs of other birds – reducing their chances of mating to boost the population.

“But birds that are bred in the zoo just don’t have the same learning experience that they would have in the wild in their naturally large flocks,” Dr Pitcher said.

Ahead of National Threatened Species Day on Tuesday, BirdLife Australia has released on Monday the results of its annual Aussie Backyard Bird Counts, carried out through citizen scientists over the past seven years.

The count has recorded a significant drop off in reported sightings in Melbourne and Sydney and other major cities of many once common small garden birds, such as the superb fairy-wren, silvereye and willie wagtail – likely to due to loss of urban habitat.

The regent once ranged in the thousands from Queensland to South Australia, but land clearing has reduced the wild population to about 350 and its habitat to a handful of breeding sites.

However, researchers from Australian National University’s Difficult Bird Research Group have found there are so few regents they are picking up songs from noisy friarbirds, eastern rosellas and spiny-cheeked honeyeaters.

Dr Pitcher said scientists believe there’s a crucial developmental window in a young regent’s life when they learn the song that will stay with them for life.

Initially, Taronga introduced several wild-caught males to their aviaries to sing the “right” song but with dozens of fledglings making a ruckus, there weren’t enough adults to get the message across.

“We’ve augmented the wild males by putting microphones in to listen to the wild birds and then we’re piping that into other aviaries through speakers,” he said. “I was talking to colleagues recently, and they equated it to the current situation with kids and homeschooling, where now you either get the face-to-face teaching or your zoom teaching.”

Conservationists have invested time and money in projects to protect the remnant habitat in NSW and Victoria’s yellow box eucalypt forests.

Dr Pitcher said money is needed to expand breeding programs and the music lessons, which not only help the birds find a mate, but also to integrate and find protection in flocks.

“It really looks like the birds that we were teaching are singing songs closer to what’s considered a wild-type song. It seems like we’re starting to unravel the code,” he said.

“We did a review of 300 birds we released into the wild and found those that had been exposed to some tutoring, as we call it, look like they had better survival post-release than birds that hadn’t had the song-tutoring.”

“We face an enormous challenge in addressing threats to our native animals and plants,” Ms Ley said. “Many of them are unique to Australia and to our identity, which is why the Morrison government is focused on a range of activities to address these challenges.”

BirdLife national public affairs manager Sean Dooley said his organisation’s annual survey showed reports of superb fairy-wrens in Perth and Melbourne had halved in the past seven years, while reports of willie wagtails had also been halved in Sydney, Melbourne, Adelaide and Darwin. 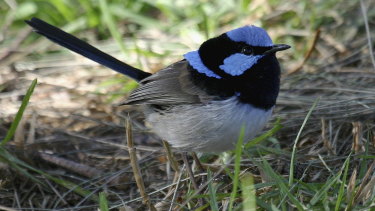 Reported sightings of Superb Fairy-wrens have halved in Melbourne over the past seven years.

“These much-loved birds are usually found in suburbs that have corridors of native bushland close by so their rapid disappearance, along with a number of other small bush birds, is cause for grave concern.”

In need of some good news? The Greater Good newsletter delivers stories to your inbox to brighten your outlook. Sign up here.

Tags: Honey, of, Regent, Song, Survival
You may also like
Celebrities News